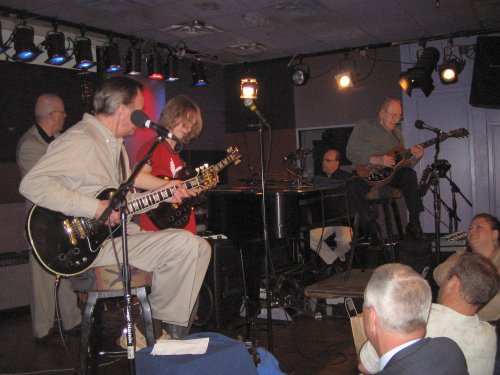 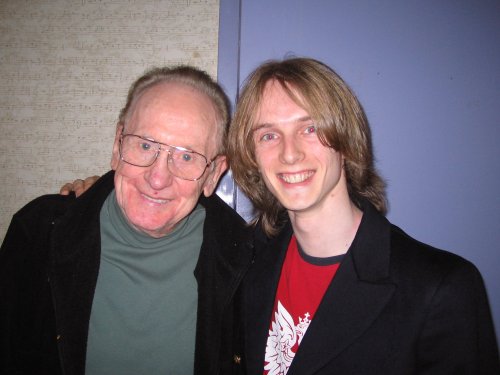 While enjoying a rare day off while in New York City, Carl Palmer Band guitarist Paul Bielatowicz got an unexpected invitation: He was asked by 91 year-old music legend, Les Paul to join him onstage for an impromptu jam session with Les and his classic trio.

“It was an incredible honor to be asked by a music legend as important as Les Paul to come on stage and perform during his show,” said Bielatowicz, shortly after performing with the elder Paul on Monday, June 5th, at the Iridium Jazz Club in Times Square, New York City.  “To be playing along side the man who introduced the world to the electric guitar and has long been viewed as one of the greatest guitarists of all time, will be a moment I will never forget.”

Bielatowicz performed a groove-driven rendition of the Van Morrison classic, “Moondance,” with Les and his trio, and then performed a solo version of the Rimsky-Korsakov classical piece, “Flight Of The Bumble Bee,” which he does in the Palmer show each night. When the guitar icon invited Bielatowicz onstage, he introduced him by saying: “I am not even going to attempt to pronounce this guitarist’s last name, let’s just call him Paul from England. I can remember that name!”

After finishing his two song set, Les Paul told the audience: “ Boy, that young man sure can play!.”  The audience, in turn, gave Bielatowicz a standing ovation.

The invitation came after Palmer Manager Bruce Pilato (who has known Les Paul since 1993) arranged for a backstage meet and greet with the guitar legend and Bielatowicz, before the show.

“After speaking with me, he asked me to join him on stage during the show,” said Bielatowicz, of the man who not only invented the electric guitar, but also developed multi-track recording. “At first I said ‘No!’, because, frankly, the thought of playing with Les Paul was terrifying. But in the end, he was so friendly and gracious, he made me feel very comfortable. Now, I am so glad I was able to have this amazing opportunity.”

The jam with Les Paul took place while Bielatowicz  was in New York City to play a sold-out show with The Carl Palmer Band at BB Kings, also in Times Square. It was one of 33 shows on the band’s first North American tour, which runs through July 3rd.