Hand built by an EVH obsessive in the rock n roll capital of the world (Worthing)!  A bored ebay search for guitars for sale within 10 miles of my house brought up this amazing find, just a few hours before the auction ended.  The guitar is faithful to the original, right down the smallest detail (even the date on the quarter coin is correct). 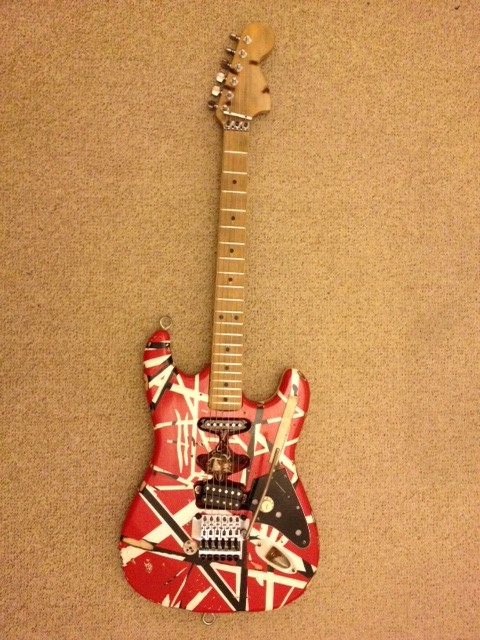 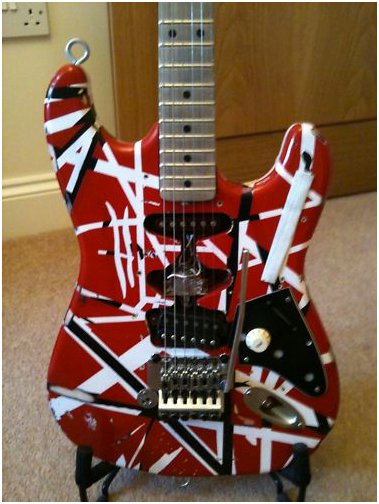 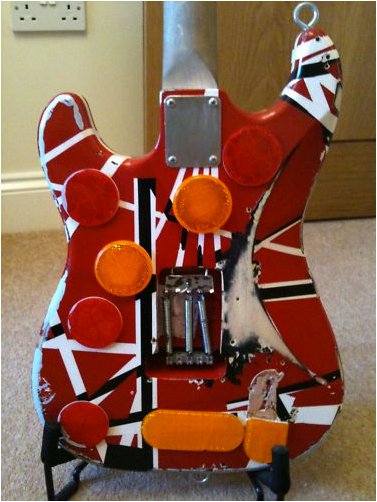 A Fender custom shop reissue of the legendary ‘Nocaster’ guitar from early to mid 1951. The story goes that Fender was sued by Gretsch for calling the guitar the Broadcaster (as Gretsch already had the “Broadkaster” name registered for a line of drums). So, Leo made the decision to change the name of the guitar to the Telecaster but, not wanting to waste the already printed decals supporting the name “Fender Broadcaster”, he instructed his factory workers to simply snip the decal in two thus discarding the disputed name from the guitar. These old decals only lasted for around 500 guitars, making the Nocaster model one of the most sought after in Fender history. 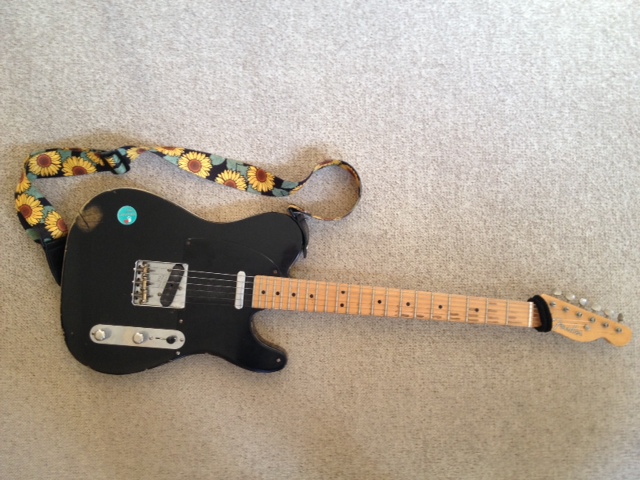 Huge fat neck and high action all add to the experience of playing this guitar. Like all my guitars, I had this refretted with Jumbo frets and, while that was being done, I got my guitar technician to sneak in a cheeky 22nd fret! 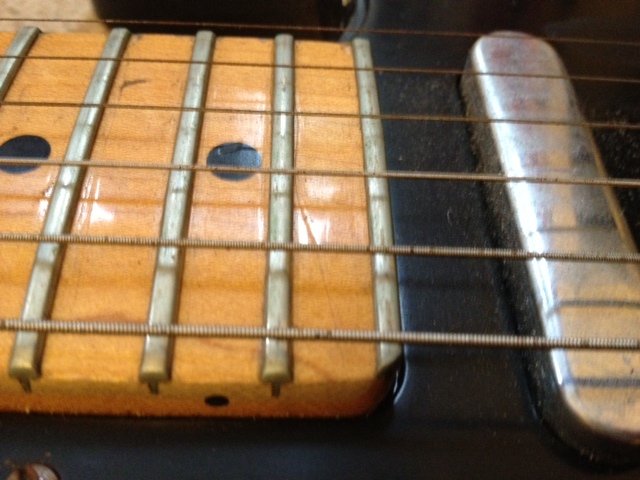 I bought this guitar a couple of weeks before rehearsals started for my first tour with The Carl Palmer Band. 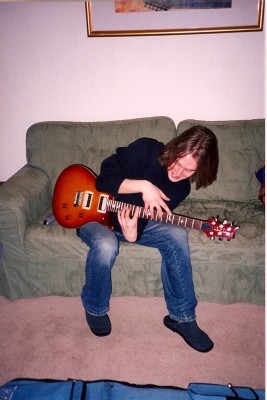 Since I got it I’ve made a number of modifications to it (I seem to be continually modifying most of my guitars).

The guitar’s first modification was made within a week of owning it… I had the 5-way rotary pick-up selector, that comes as standard, taken out; to me, it never seemed like something I’d be able to use practically or quickly and meant that I couldn’t easily tell which pick-up position was selected by looking at the guitar. I replaced the 5-way knob with a 3-way pick-up selector (the black plastic switch visible in the photo) and had a coil-tap function added to the tone knob (push/pull). 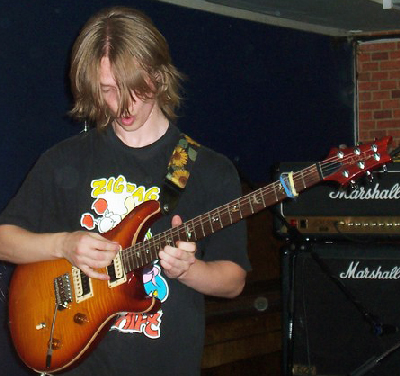 The next modification came a couple of weeks before the CPB’s 2006 U.S. tour… I decided that I never really liked the feel of the frets in the guitar, so I had them replaced with jumbo frets (Dunlop 6100). In doing so, my guitar technician replaced the original black nut with a white bone nut. On the tour that followed, Paul Reed Smith (Mr. PRS) came to one of our shows and, much to my delight, commented on the craftsmanship of the job; all credit to Andy Warnock! 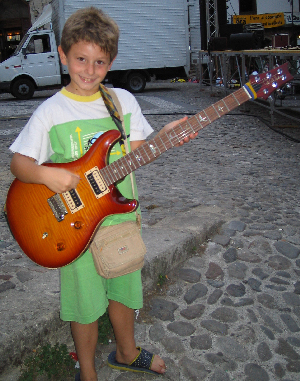 Writing this, I realise that all this guitar’s modifications came out of necessity, before some big undertaking… the next one was no exception. After Neal Morse asked me to join his band for a tour, I set about transcribing and learning his material; I soon realised that I’d have to switch between electric and acoustic guitars very very quickly. Along came Graphtech with their ‘Ghost System’; an amazing piezo pick-up system giving the best acoustic sound I’ve heard from an electric guitar – I had it installed, giving me an even more versatile guitar with a couple of extra knobs and switches…

At the same time, I got Andy to change my coil tap push/pull switch to a push/push – making it much more easy to change pick-up configuration whilst playing (although this obviously had no cosmetic effect on the guitar). 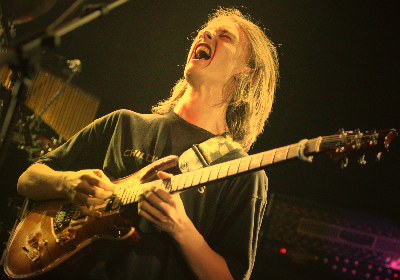 The final, small, modification I made to the guitar was to change the bone nut to a graphtech nut (returning the guitar’s nut to its original black colour). I’d grown tired of having to rub graphite from a pencil into the bone nut when I changed strings (a trick for lubricating, to help tuning); graphtech nuts are naturally slippy and so help your guitar stay in tune. I was also keen to make this change as, when I’d installed the graphtech string saddles of the ‘Ghost System’, I noticed a marked improvement in the guitar’s natural tone. 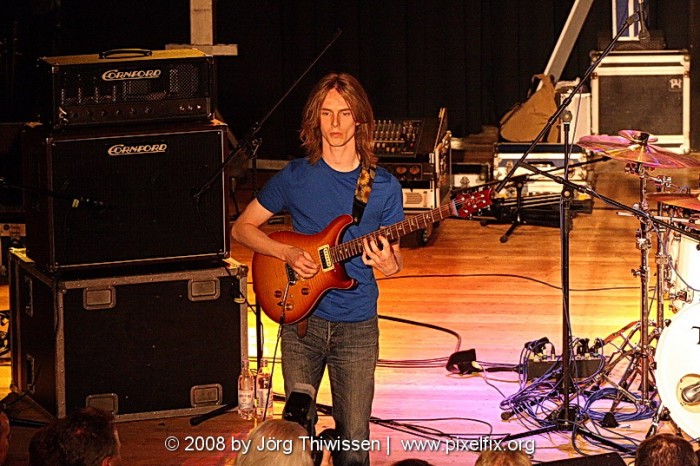 I got this guitar for my 15th birthday – partly as a present from my parents and partly with money I’d saved from my Saturday job, working in a coffee shop (note to anyone reading this in The Netherlands; coffee shops are a COMPLETELY different thing to your understanding of the word. Unlike the establishments that share the same name in Amsterdam, English coffee shops simply sell… coffee!).

This was my main guitar for most of my professional playing life, up until about 2 weeks before I had my first rehearsal with The Carl Palmer band and I bought my PRS.

I picked this one up on The Carl Palmer Band’s 2006 U.S. tour in a vintage and collectable guitar shop called ‘The HOG’ (or The House Of Guitars) in Rochester, New York. I tried to incorporate it into the set on that tour but, when Carl told me at a sound check in Chicago that he thought it sounded more like a banjo than a sitar, I was offended and took my new toy back to the dressing room… never to be used on stage again (…yet)! 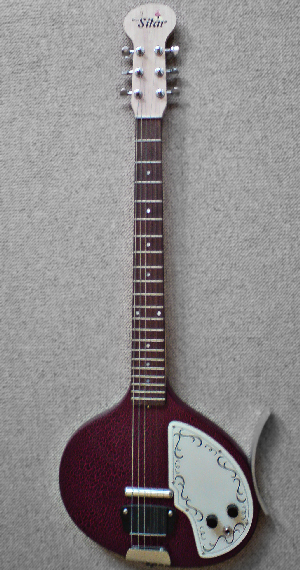 This was my main guitar whilst studying at Leeds College of Music. I instantly fell in love with it the moment I saw it hanging on the wall of ‘Music Ground’ in Leeds.

A true shred machine, this guitar has a scalloped fretboard from frets 12 to 24. The scalloping job was obviously a DIY effort – but a good one! 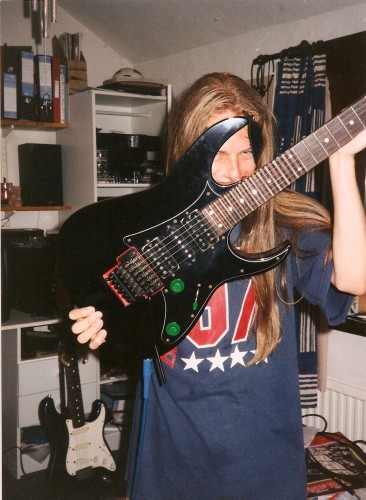 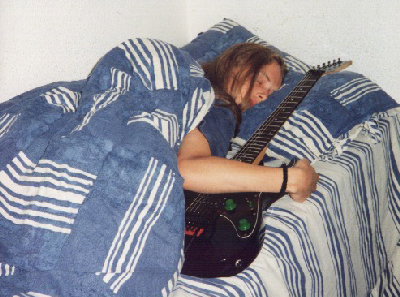 About a year later I’d grown bored with the guitar’s plain black finished so I decided to strip it down to the wood (using nitromors). I then sanded it down and added a layer of almond oil to the bare wood (against my wishes, because I didn’t want the colour or texture of the naked wood to change) under the recommendation of a guitar builder friend, Brian Eastwood.

Over the years, the guitar acquired a few stickers… the finishing touch was add when Virgin Atlantic declared my pedal board flight case to be ‘HEAVY’! 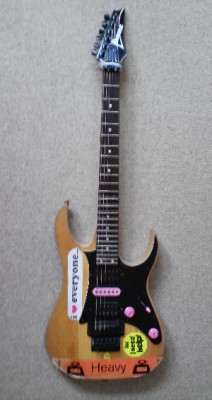 The Ibanez Universe, for those not well versed in such matters, is a guitar designed by Steve Vai for Ibanez; it was the very first 7-string rock guitar.

I bought this guitar from another guitarist who was studying on the same course as me at Leeds Collage of Music. It’s a rare, early (serial number 000486) white version of the model (the one seen on the inlay card of Steve Vai’s ‘Passion and Warefare’ CD – that’s what sold it to me!).

The guy I bought it off didn’t want be associated with Steve Vai (we were on a Jazz course and Ibanez Universes weren’t exactly Jazz) so he’d scratched the lettering off the head stock to try to disguise its true identity… like that was ever going to work!!! As a result, he probably took hundreds of pounds off the value of the guitar. 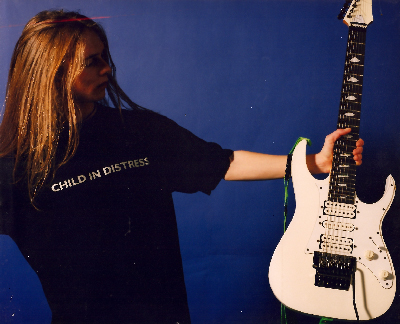 About a year later, Steve Vai came on tour to England. A massive fan, I took the guitar to the concert venue in the afternoon, hoping to meet Steve and get him to sign it. To our surprise he invited everyone waiting outside the venue into the sound-check and, sure enough, after the sound check had finished, he signed his name across the headstock for me.

Having added the finishing touch to the guitar, I was keen to make it permanent. I asked a guitar builder friend of mine advice on the best way to seal the permanent marker signature on to the guitar’s headstock… he recommended hair spray!!! So, I obediently went out and bought a can of hair spray and got ready to seal the signature on to my guitar. Seconds before I pressed the spray cap, it suddenly dawned on me that I should probably test the hair spray on something else… I found a piece of plastic and scribbled on it with the same permanent marker that Steve Vai had used to sign the headstock… gave it a few minutes to dry… then sprayed a thin coat of hair spray over the scribble. A moment later, to my horror, the permanent marker scribble had started to disappear and, when I wiped it, the plastic it was written on came up clean!… It turns out that hairspray is just about the best thing for removing permanent marker! Relieved that I’d done the test, I put the hair spray and guitar away and to this day, Steve’s signature still remains in its original condition on the guitar’s headstock. 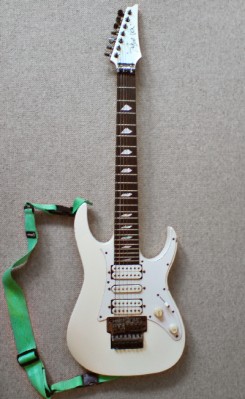 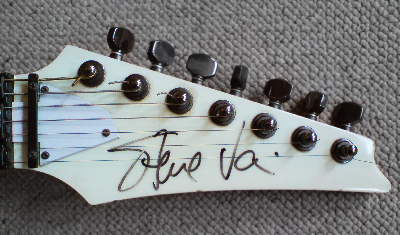 I bought this guitar when I was around 17; it was my first 7 string. At the time 7 strings were extremely rare and, when you did manage to find one, expensive. I searched for a 7 string for years until I came across a local private guitar dealer / collector who managed to locate a reasonably priced one for me.

When I went to look at the guitar he told me that he was selling it on behalf of Aziz Ibrahim – the guitarist for the Stone Roses. He explained that when Aziz had joined the Stone Roses they had bought him 20 guitars of his choice; this was one of them.

The guitar opened up a whole new way of thinking for me and enabled me to work on arrangements of classical piano pieces; transforming my ideas of what could be done with tapping. 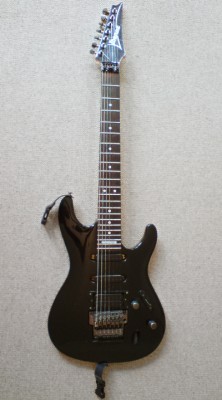 One of my few ebay bargains!!!

The auction ended at the princely sum of £41 (minus a £5 voucher kindly given to me by ebay). The guy selling it turned out to live in the next town along the coast from Brighton (where I live) so he said he’d call round the next evening and drop it off as he was going to be in Brighton. When I told him my address he said that he used to live on my street but could remember the number of the house… it turned out that he used to live in my house, in the flat upstairs (I live in a big Victorian house that’s been separated into flats)… of all the houses in Brighton!

He dropped the guitar off, which was in desperate need of attention, and we got talking.  It turned out that he repaired and reconditioned old amps for a living and so I asked him to take my Proamplifiers VSQ65 head away to have a look at – it hadn’t worked in years, despite my best efforts to get it repaired… A few weeks later he called to tell me that he’d fixed it… what a guy!

The guitar is a 1950’s attempt at a 7 string jazz guitar. It has the original pick-up, which, when I bought it was untested and presumed not working. 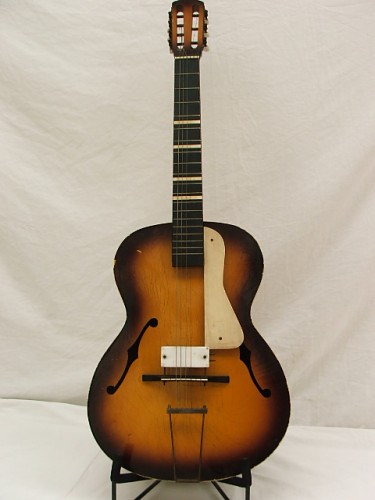 I took the guitar to my guitar tech (Andy Warnock) and left it with him to see what he could do. Another few weeks later, Andy called to say that he’d set it up, wired the pick-up up to a tone, volume and jack socket and that the guitar was ready to collect.

The guitar now takes pride of place in my living room – an object of much interest and the occasional passing strum! 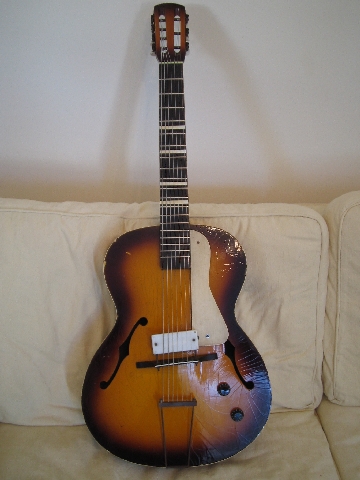