I’ve spent the past decade touring the world as a hired musician, playing to tens of thousands of people in dozens of countries… but today I can tell you that none of that will fully prepare you for fronting your own solo show.  After the release of my album Preludes & Etudes, I decided I wanted to perform the material live.  As many of you will know, the album takes a very minimal approach, trying to present the electric guitar as a classical instrument – playing classical showpieces as the composers intended (had the electric guitar been invented back then)!  For the coming live shows, I decided to present the pieces in a slightly different light, using a percussionist and bass player to give the material more of a contemporary feel.

Seeing as the gigs were taking place around my hometown in Lancashire, I decided to enlist a percussionist who I’d know from when I was growing up there – a friend called Chris Billington, who now does regular gigs on the Lancashire nightclub scene.  Simon Fitzpatrick would be on bass – the obvious choice for SO many reasons!

After three full days of rehearsals with Chris, Simon arrived a couple of days before our first gig, so we could rehearse as a band… everything came together nicely!

The morning of the show, we loaded Simon’s car and set off for Leeds… 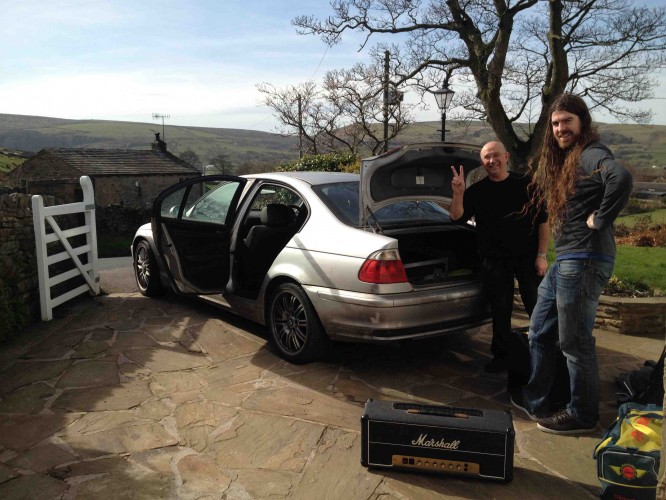 When we arrived we found a great little venue, and started to set up. 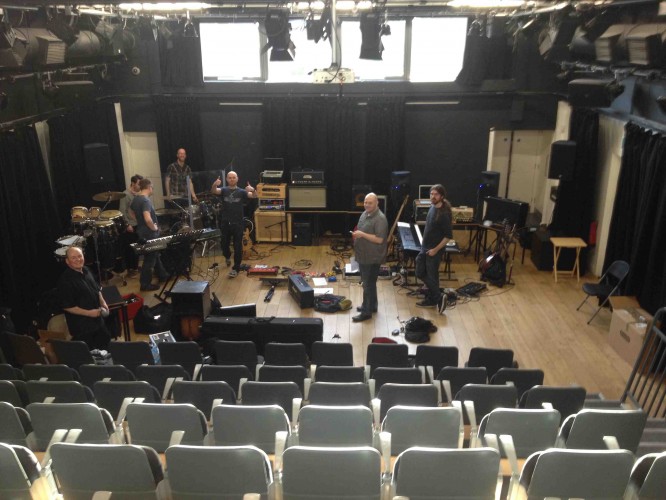 Waiting for us was Mark, the UK representative of the amp company Brunetti – he’d kindly offered to sponsor the event by bringing one of their amazing amps for me to use.  I tried it, and was delighted to find it delivered everything everyone had promised – what an AMAZING amp! 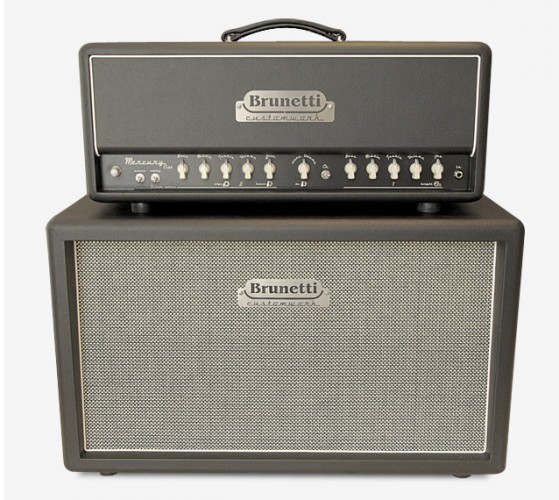 The schedule for this evening consisted of three sets – each fronted by a guitarist whose surname began with ‘B’ (hence the ‘B3’ title)! 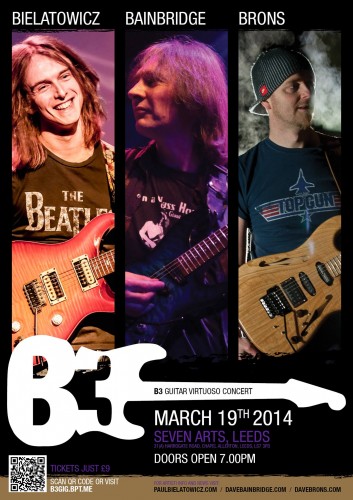 Three bands made for a VERY full stage… 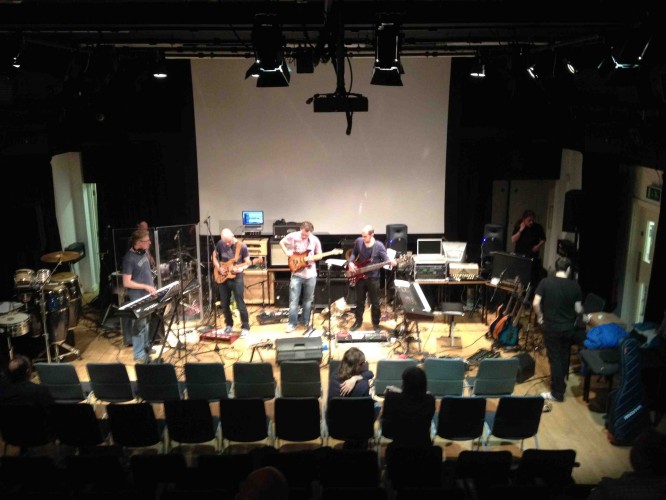 Due to the amount people on stage, there wasn’t really time for us to sound check – Simon, Chris and myself had a quick blast through a few bars of our opening tune to make sure we could all hear ourselves, and then it was time to let the public in.

The running order for the evening was Dave Bainbridge (of Iona fame), followed by Dave Brons’ band and then my trio – I’m not ashamed to say that the wait was nerve wracking. 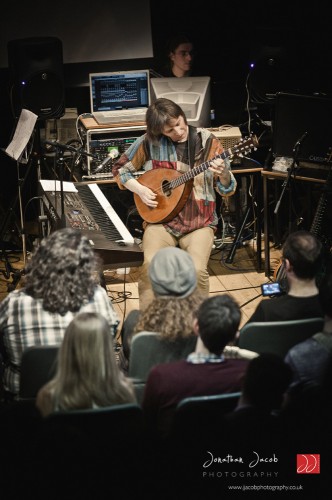 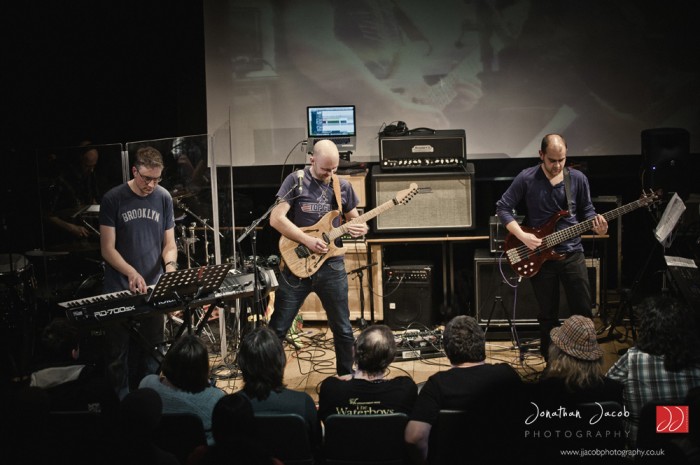 There’s something completely different about fronting your own show, and the unfamiliarity was making me nervous.  I watched the two Daves play great sets, including a guest appearance from fusion guitarist Tom Quayle, and then it was time for us to hit the stage.  We walked on to a swarm of bees – good friend Tony Ortiz had put a few videos together to accompany some of the tunes we were performing.  The opening number was Flight of The Bumble Bee.  As the bees swarmed on the big screen and through the PA, my adrenaline grew… until it was time to count in the tune, which I did at breakneck speed!  If you weren’t there, then you missed the fastest performance of the piece we could (just about) manage! 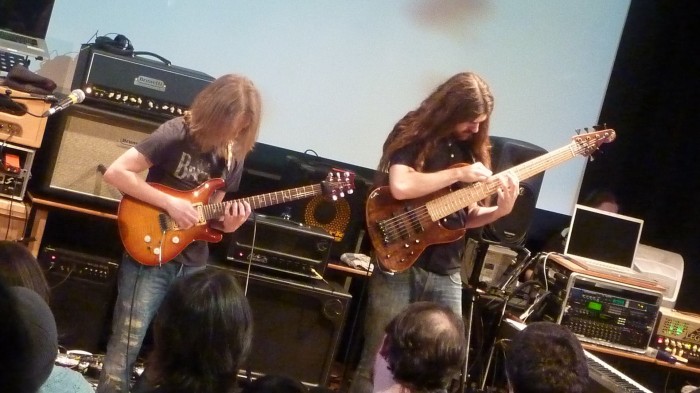 Once we were in our stride, the stage felt like familiar territory, and I was able to relax into the gig. 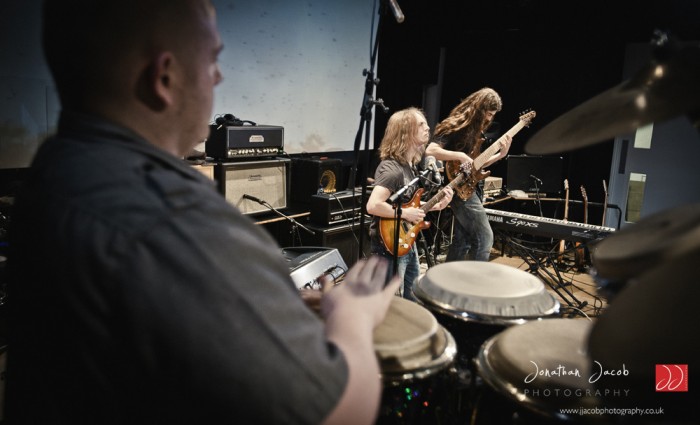 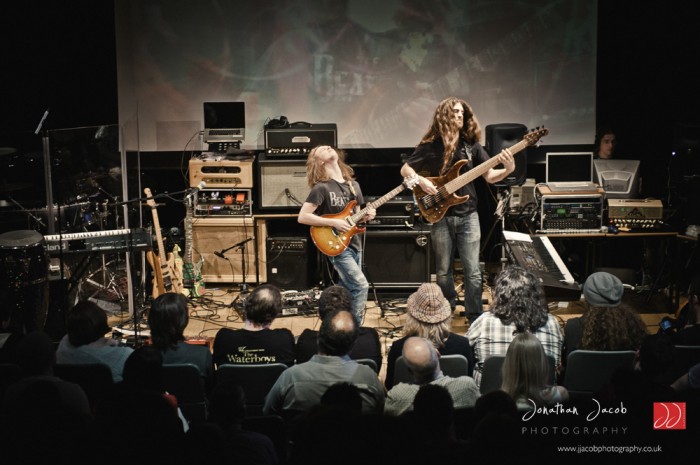 Besides playing my own music with my own band, one highlight of the evening was getting to use my new signature pedal – The Honey Pot.  Wow, what a pedal, what a sound!  More details to follow, but I’m SO excited about it! 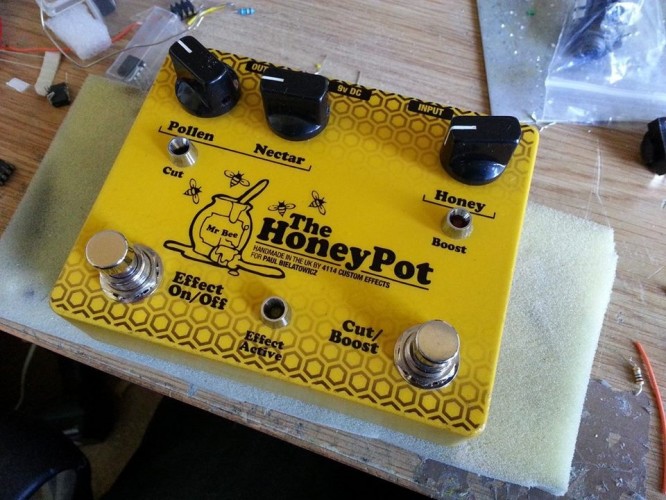 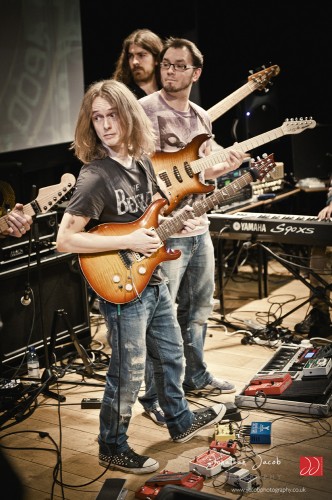 After our set was over, all of the musicians who had played during the evening came together onstage to performed two more tunes.  Iona’s Castlerigg/Reels and an impromptu version of Superstition.  What an amazing buzz it was to play the Iona tune with Dave Bainbridge – Dave Brons and myself were teen guitar nerd buddies, and Iona was one of the bands we were always into. 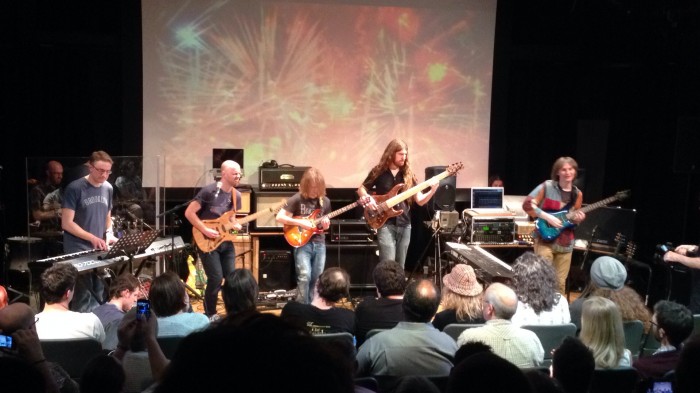 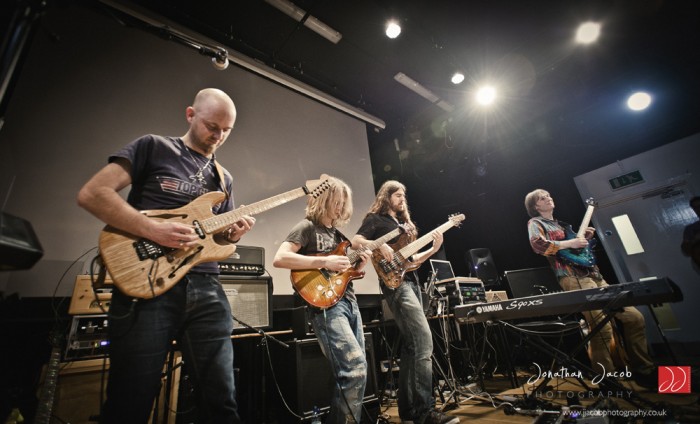 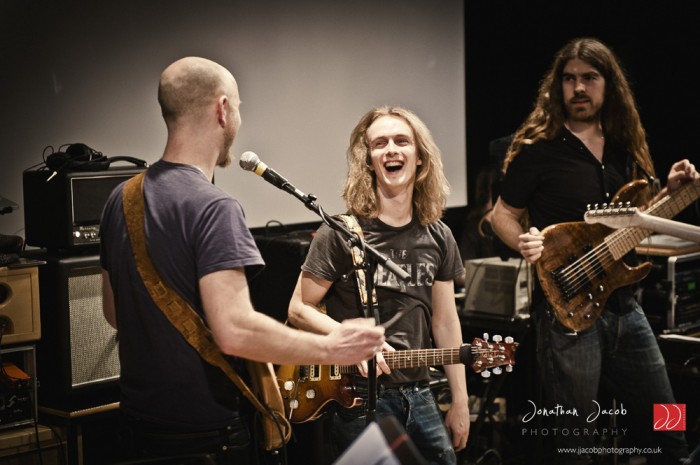 After the show I had chance to hang out and catch up with some old friends from my college days (I studied in Leeds for 3 years). 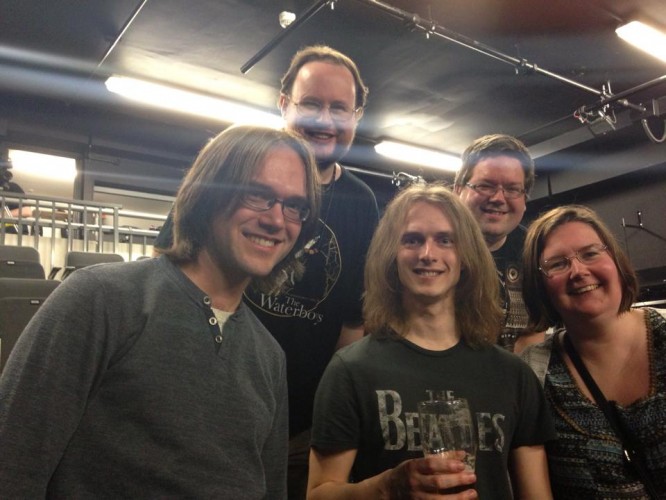 Then, when it was all over, Simon and myself loaded the car and searched for the best kebab house in town for a celebratory meal! 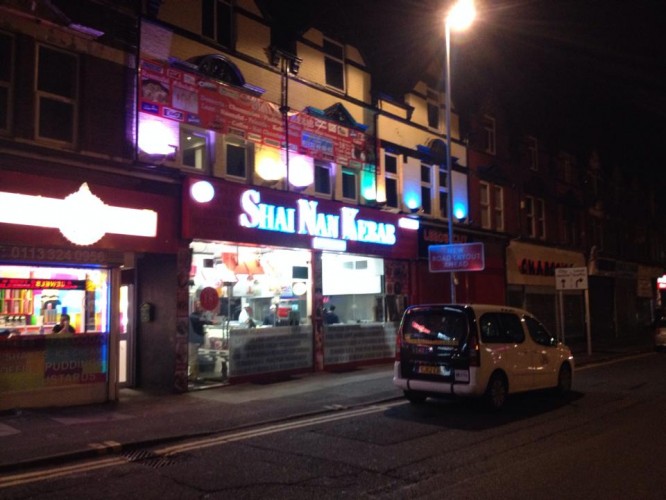 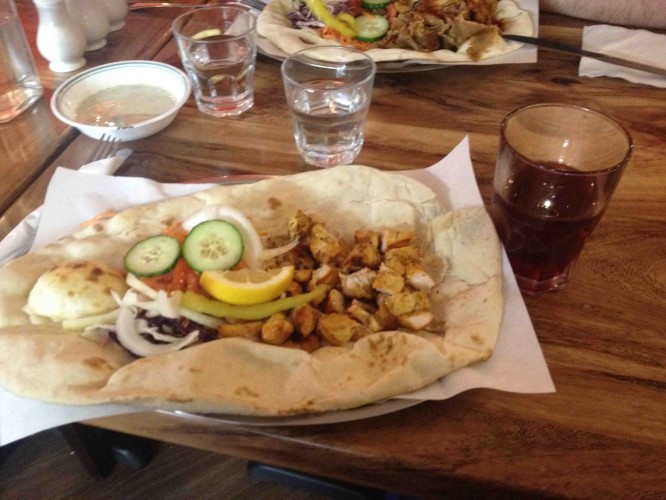 The gig was captured by Jonathan Jacob, a hugely talented photographer.  Click HERE to check out his full set of photos from the evening.