We had the morning to sleep in, which was very welcomed after our previous few days’ sleep deprivation.  Xavi, our promoter, picked us up from the hotel in the afternoon and drove us to the airport, where we had 5 hours to kill before our plane took off.

Much to our dismay, we were booked onto a Ryanair flight – my guitar shudders at the mere utterance of that name!  I’ve been playing in Carl’s band for nine years, taking my guitar as carry-on luggage every single flight for that entire time (our total flight count must be well into the hundreds), and not once had to put my guitar (in its soft case) into an aircraft hold.  However, as soon as I heard we were travelling with Ryanair, I realised there was a very good chance this pattern was about to change. 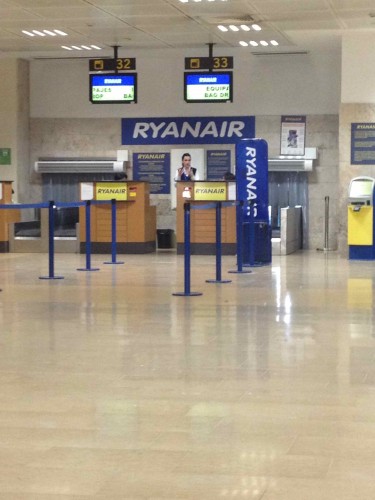 Sure enough, despite my best efforts and strongest arguments, the (surprisingly sympathetic) representative explained what I already knew – Ryan Air is unlike other airlines, their rules and regulations are unique and the only way I’d be able to take my guitar into the cabin would be with a separate boarding pass and seat for it (which is well-worth considering in future).  So, reluctantly, I said goodbye to my beloved and faithful instrument and I watched it disappear down the crematorium-style conveyor belt to meet its fate, protected by nothing more than a thin canvas gig bag.

After a killing a few more hours (helped by free-McDonald’s McWifi) we boarded our plane.  There was a brief moment of anxiety (his)/amusement (mine), when Simon’s name was called over the plane’s PA system, but this was almost immediately followed by relief (his)/disappointment (mine) when it turned out to be over some trivial boarding pass issue… we love each other really!

We landed in Dusseldorf late in the evening, just in time to catch last orders at the hotel bar.