We met in the lobby at 11am and drove across the street to the Starbucks.  At this particular Starbucks they added a personal touch by asking you your name then, when your drink is ready, they call you personally – it’s nice not to be reduced to a coffee order.  On the way out I noticed a sign advertising two other branches of Starbucks – one in York and the other in Brighton…  I’m pretty sure I’ve been to both, but why they’d be advertising other Starbucks in English cities puzzled me! 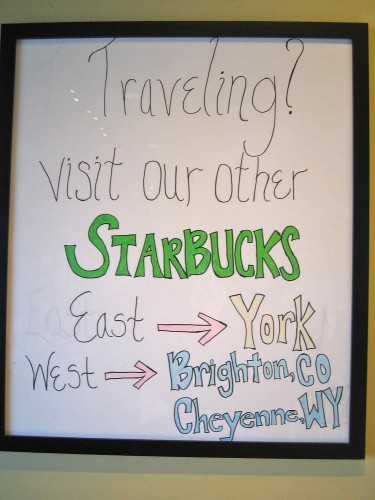 We spent the morning finish a game of Scrabble that we’d started the previous day.  As has previously been mentioned in this blog, Simon is the undisputed Scrabble champion of the tour.  However, today both me and Simone (playing in his second language) beat him – a victory worthy of documentation… 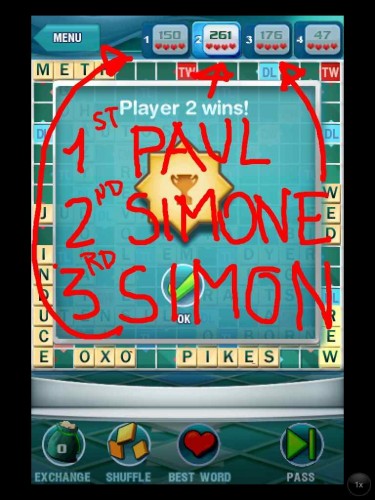 We drove for hours and hours through some very green and flat landscape.  I passed the time listening to music and taking photos of people in other cars… until one lady who was busy knitting in the passenger seat scowled at me – I had presumed that our blacked-out windows would ensure that nobody could see in.  Realising my error made me think about just how lucky I’d been not to be caught taking photos at boarder crossings or of the police officer who had pulled us over in Detroit – oops! 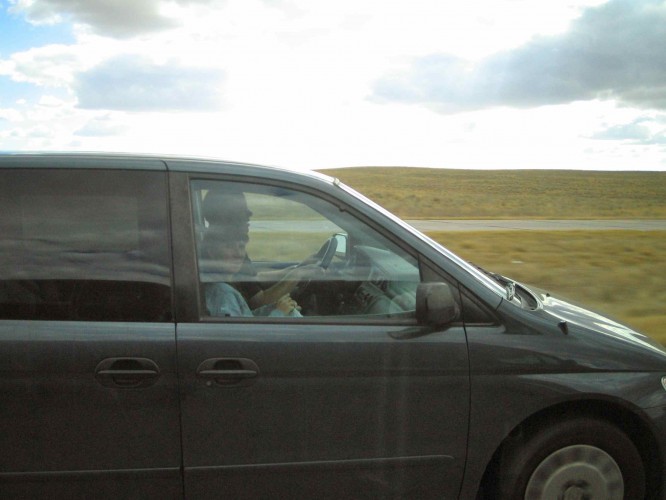 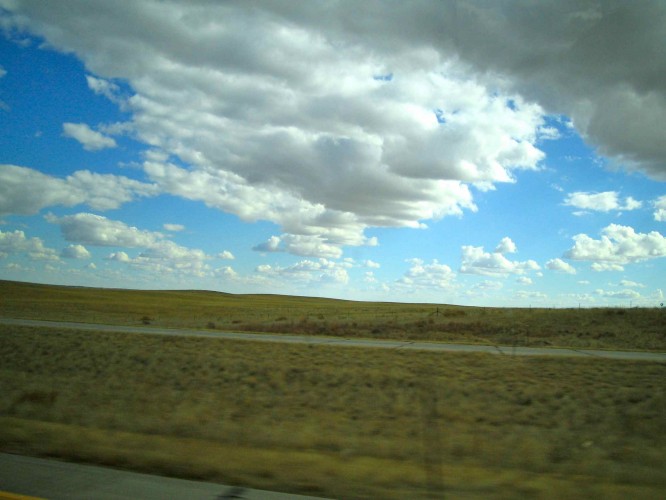 That evening we reached our destination – Denver, the city of our following night’s gig.  After chilling out in our rooms we arranged to meet in the hotel lobby at 5pm, when we’d get the free shuttle bus to the nearest shopping mall.

When we arrived at the mall we were dropped off outside a large store called Outdoor World – part of the Bass Pro Shops chain. 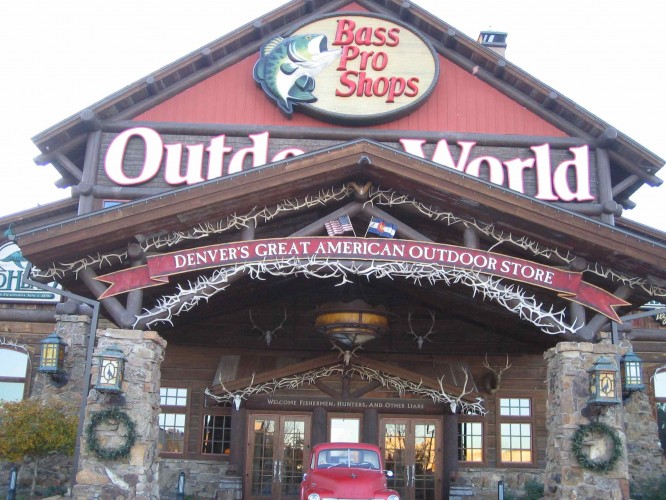 I was not prepared for what this shop had in store.  The first thing I spotted was a shelf of humorously named hot sauces at the front door – innocent enough… 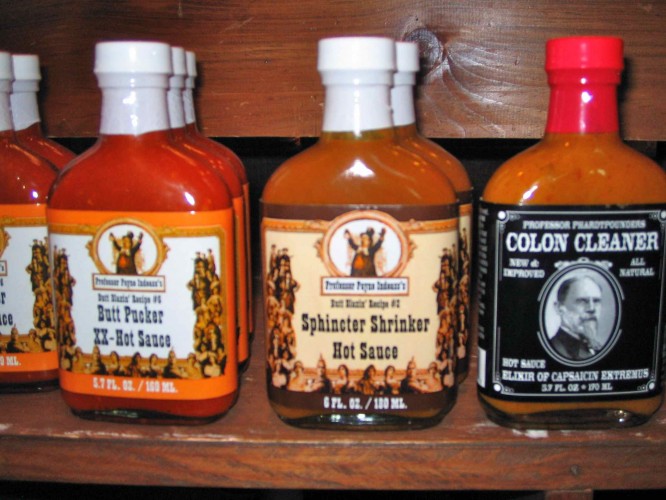 After the obvious photo opportunity (all in the name of the blog – I hope you appreciate all these silly photos as much as I do!) I looked up and saw a huge two-level shop FULL of stuffed animals.  The sight was horrifying.  Everywhere I looked there were dead animals being used as decorations – decorating every coat or clothes rail were at least two stuffed animals (from birds, to foxes, to racoons…).  The place was an apartment store with a theme of death.  Huge dead bears were displayed around the store, above our heads were reconstructed scenes of buffalo running and beautiful packs of deer jumping.  Each of these animals was beautiful – such a marvel of nature, reduced to an ornament in order to sell products and make money.  The shop called itself an ‘Outdoor’ store – presumably because it’s a place where you can come and buy things in order to help you enjoy nature and the outdoors… things like guns and other killing implements – surely the best way to enjoy nature is to kill as much of it as possible, right? 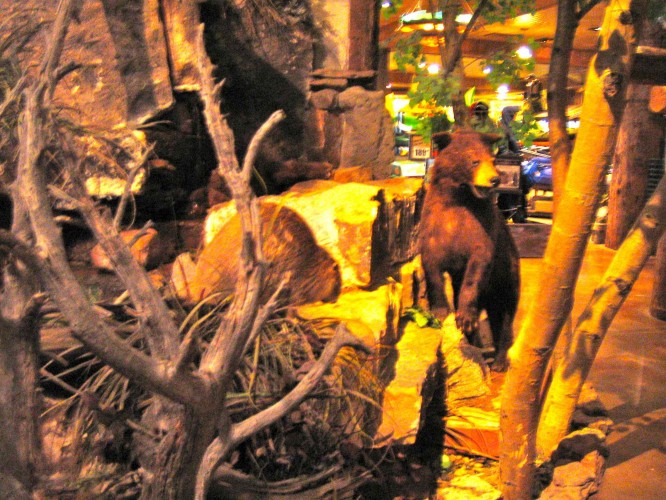 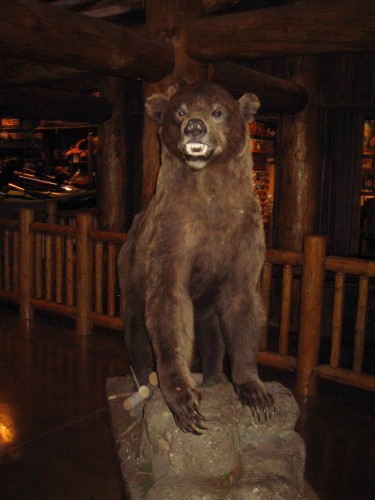 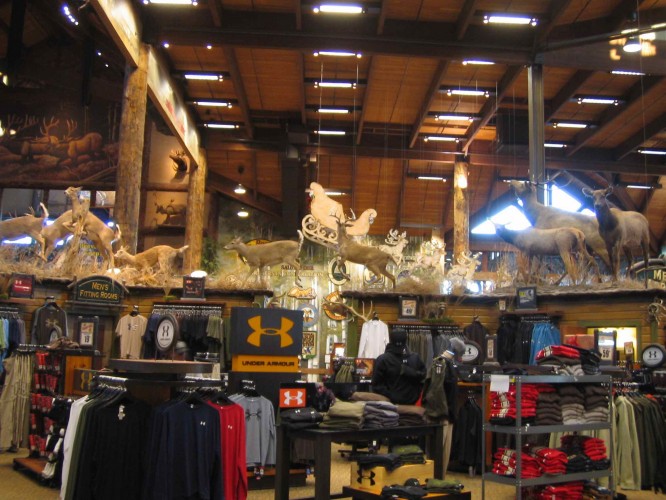 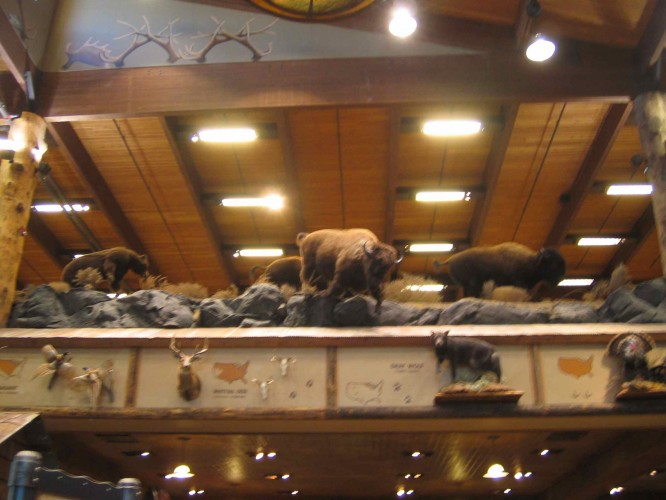 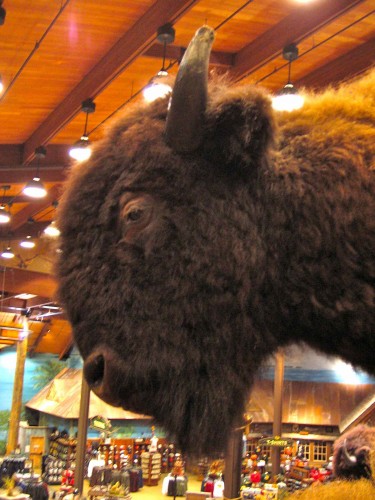 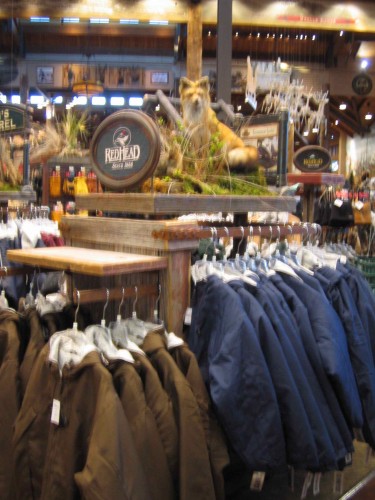 They even had guns that were clearly aimed (no pun intended) at children – let’s get them into killing as early as possible.  There was a nice selection of magazines which included the old classic ‘Concealed Carry Handguns’ and the aptly named ‘Crappie World’ – how ironic, they even admit it themselves… when humans, supposedly the highest life-form on earth, start killing animals for no other reason than sport and trophies, then this is a very crappie world. 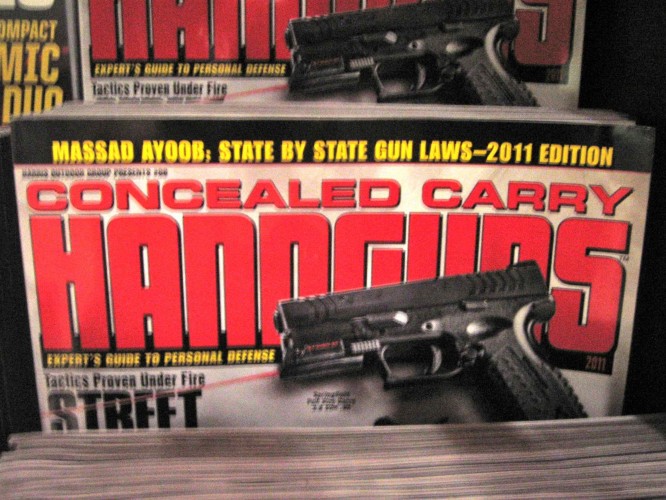 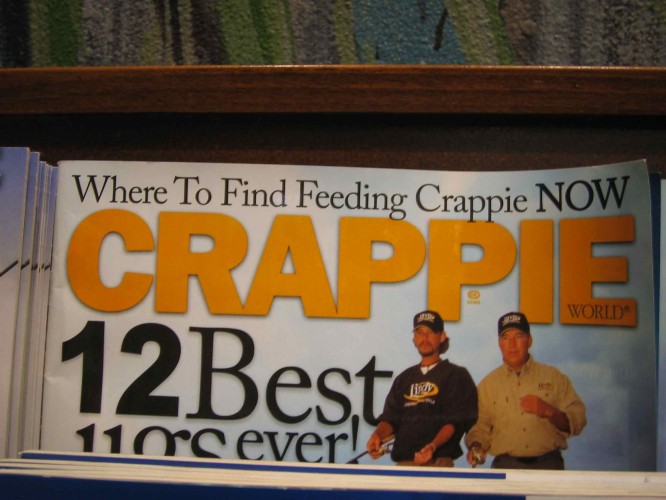 However, it’s fair to say that not all the animals in Outdoor World were dead – in the middle of the store was a large fish tank full of HUGE fish – presumable to whet your appetite for going out and finding other real animals to kill. 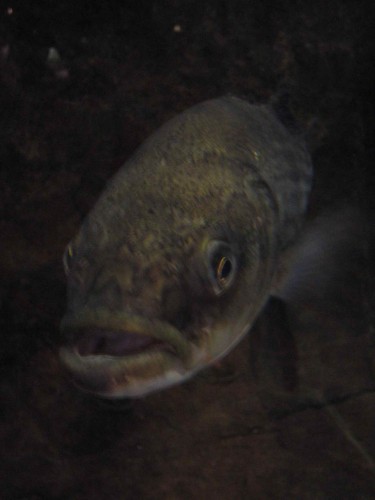 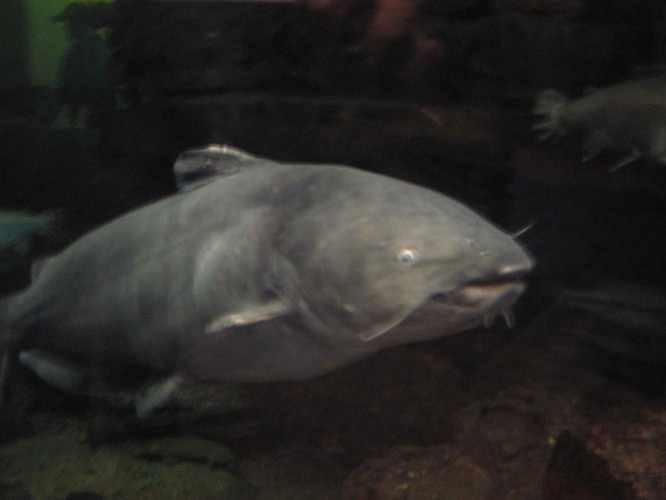 On the upper level of the store there was a fake shooting range, the type that kids play at amusement parks; we’ve all had a go when we were young – shoot the sensor on the toilet door to open it, etc.  Well this was exactly the same, with one major difference.  There wasn’t a kid in sight – this toy shooting range was full of grown men, presumably baying for blood after seeing all the dead animals in the store. 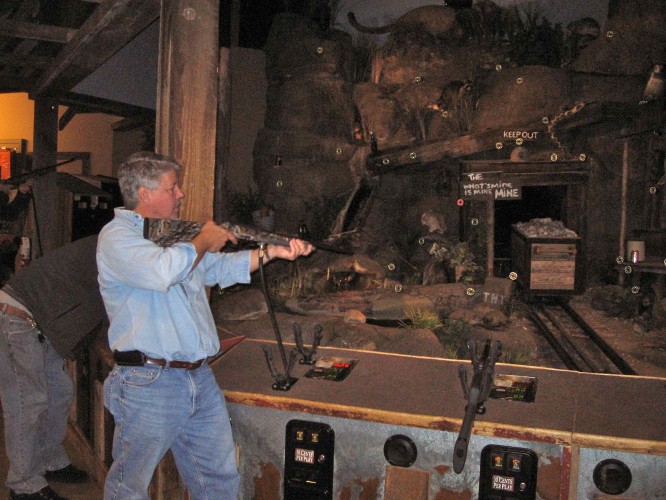 I left the store not quite believing what I’d just witnessed – I feel utterly ashamed to be part of the same species as people who would go out of their way to kill defenceless animals (what animal stands a chance of defending itself against a gun?), not for food, not for survival… but for sport.  It sickens me to my stomach that places like this are not only legal, but readily accepted.

When we got out of the store we saw a rabbit hopping in the parking lot – fearing for its life we all chased it away before one of the bloodthirsty customers spotted it!

After our harrowing experience me and Simon decided to see a movie – Saw 3D!  Although a notoriously disturbing film, I must say that I found the movie a lot less disturbing than our trip around Outdoor World.  However, I was a little concerned about how the film might effect the 6-year-old girl who was sat a couple of rows in front of us.  The film was rated ‘R’ so apparently, as long as they’re accompanied or dropped off by their parents, a child of any age can watch this film.

After the film we headed to Outdoor World to wait for the shuttle bus back to our hotel.  While we waited we saw a guy putting up Christmas lights.  Halloween was yesterday, so I guess the next thing that will make people spend their money (besides displaying dead animals next to products) is Christmas.  I returned to the hotel feeling a little less positive about the society we’ve made for ourselves. 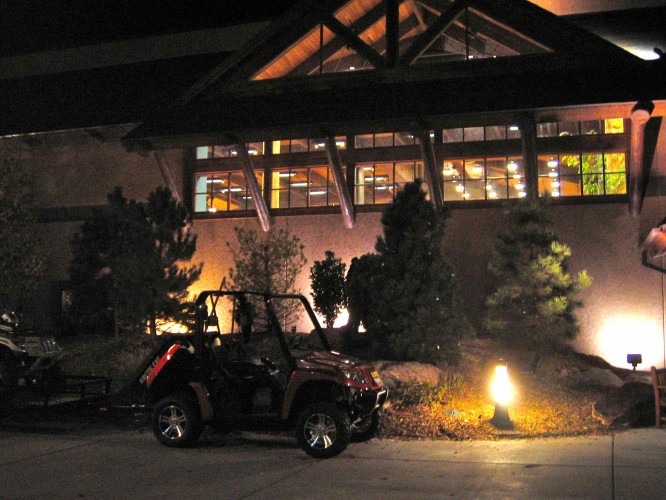