After a short drive we started to look for a place to stop for lunch.  Josh, our resident Google Maps diner finder set to work and picked out a good looking place.  He told Harry the number of the freeway exit and Harry responded, “Oh, you mean the one we’re just passing?”.  We decided to exit the freeway a short while later and pulled into the car park of a Denny’s… tour tradition states that we must have one Denny’s every tour.

Once inside we took a look at the menu, which consisted of delights such as ‘Moons Over My Hammy’ – a name they were apparently so proud of that they’d taken the time to register it as a trademark! 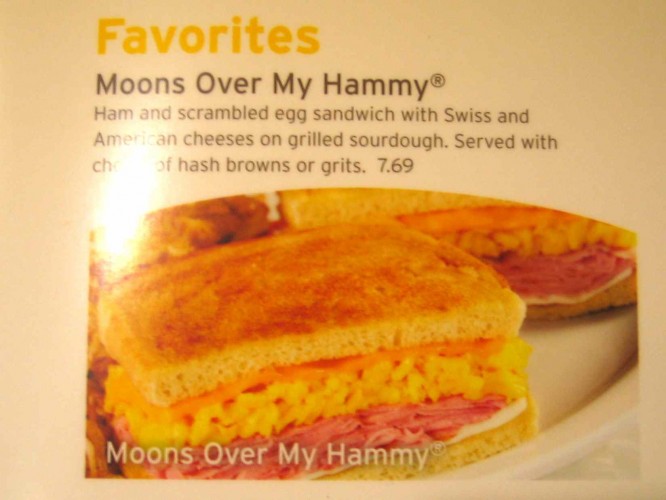 The only item I could find that had not been fried was the Jacket potato soup so I ordered that (but had to ask the waitress to leave out the fried bacon that comes with it as standard).  Josh and Simone ordered Moons of My Hammy (presumably enticed by the witty title) while Harry and Carl checked out the special offers on the Over 55’s menu! 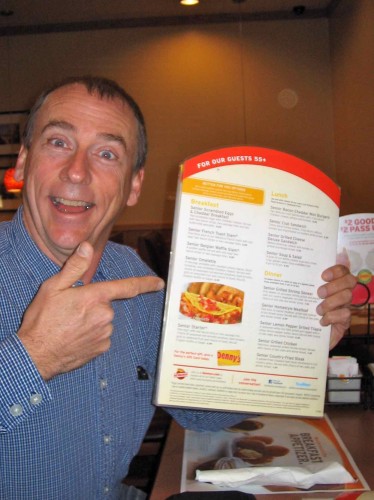 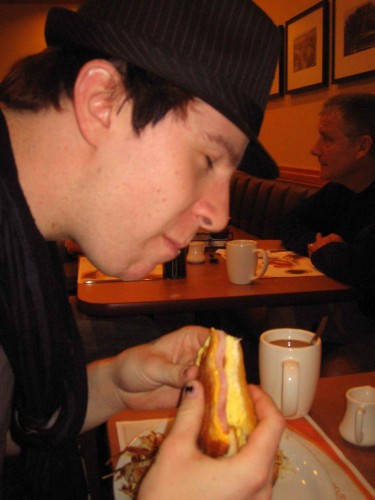 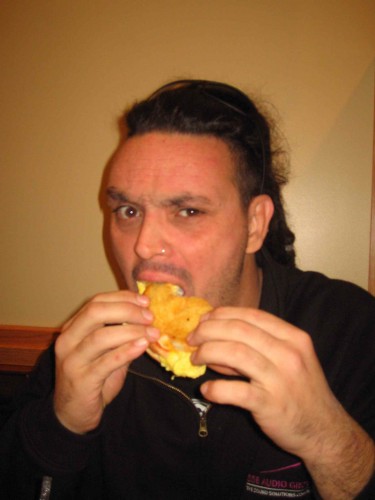 When we arrived at the venue we found a small rock club with a very cool record store upstairs.  The sign over the the door gave a warm welcome to all their guests… 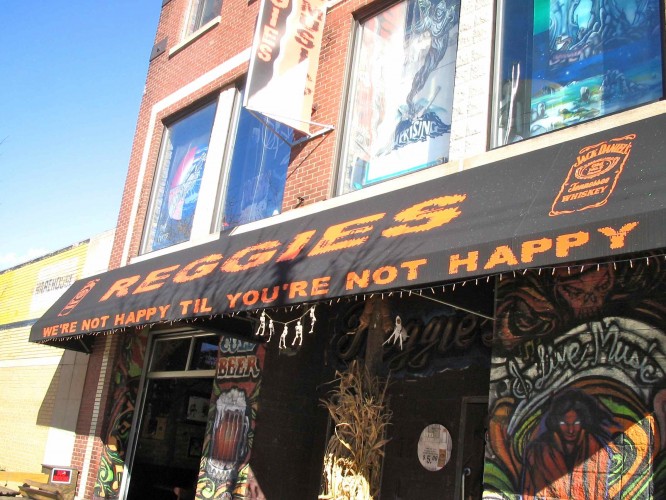 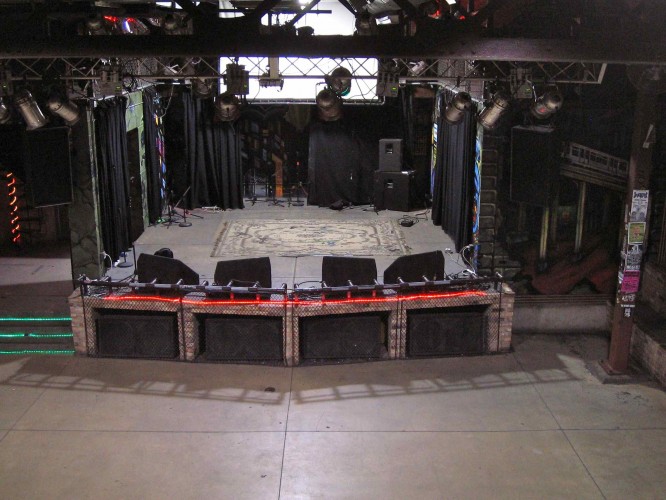 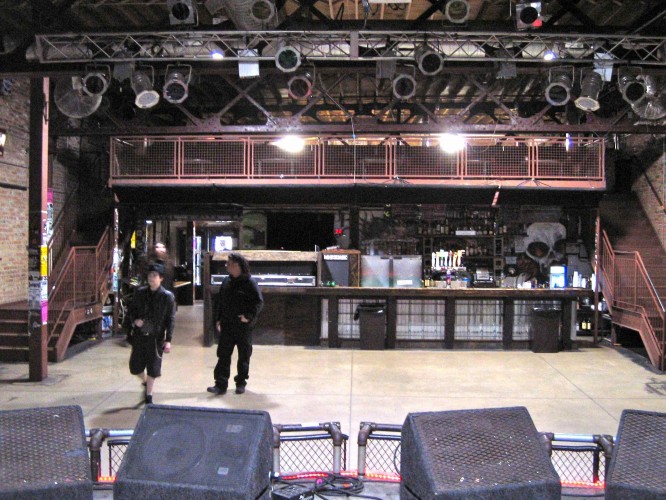 Inside I explored the club while the crew set up the stage.  On the wall I spotted that one fan had added their own marker pen tribute to Carl… 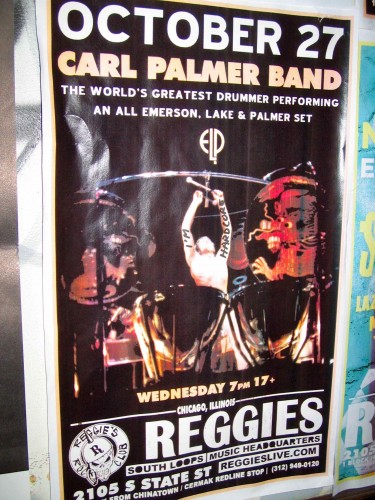 Our soundcheck went well – after one song we were happy with the sound on the stage (my guitar was blasting me – that’s all I ask for!).  Happy, we left the stage and retired to our green room, which for the first time in my entire gigging experience, was actually green – green lights lit the whole room! 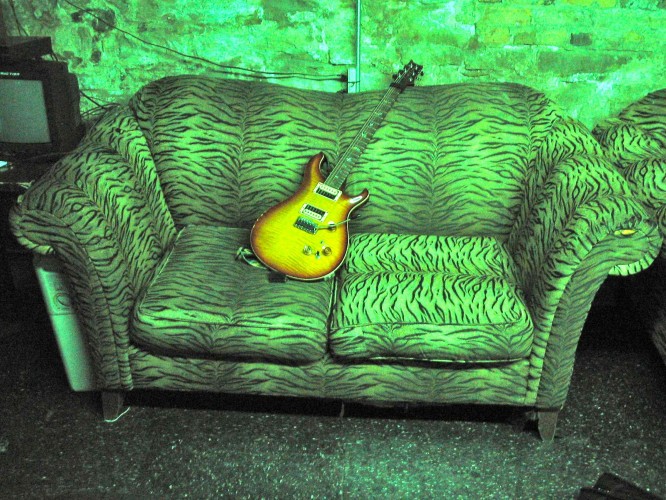 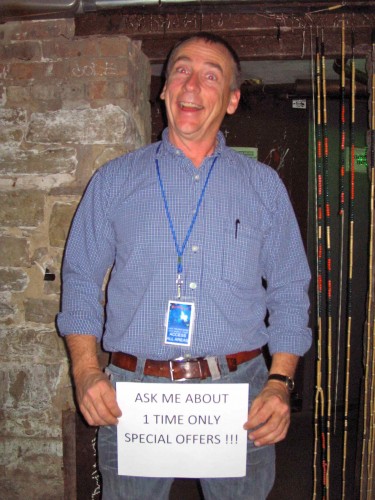 Tonight we were being supported by two bands. The first was an all acoustic band called Might Could – three guitars and one acoustic bass.  They were great, playing rich harmonies and counterpoint – very cool.  The second band was a local prog band called District 97.  They were so good – the drummer, Jonathan Schang writes all the material (as well as playing killer drums).  The band offer a fresh flavour of modern prog, fronted by a great female vocalist and featuring a member of the Chicago Symphony Orchestra on cello.  Check them out when you have the opportunity.

As is the usual procedure when we have a support band, SImon and I went out to check all our gear was working (accidental cable pulling or pedal knocking is common place when more than one band shares the same stage).  Finding everything as it should be I returned to the green room to await our 5 minute warning.  When our intro music started Simon went on stage first, followed by Carl and then me.  Then, as the intro music neared its close I looked around for the channel selector pedal that I needed for the very first hit of the first song… it had disappeared!  The intro music finished with me frantically scrambling around on the floor.  I managed to find the cable that connected the pedal to my amp, but no pedal…  After a short amount of time Carl left the stage so that we could start again with the intro music.  I finally found the all important pedal by tracing the cable that attached it to the amp – it was all the way over by Simon’s bass pedals… what on earth was it doing there when I’d checked that all was well only 10 minutes earlier?  After a while our intro music started again and Carl came back on stage.  We launched into the first song and I noticed that my guitar kept cutting out – I kept waggling cables with no luck.  For the first half of the set the problem persisted, until I went off stage for my guitar solo and got josh to check the cables in the back of my amp – he found that one of the effects loop cables was hanging out – again, how on earth could this have happened when I’d checked everything just before the show?

After we’d sorted out this second problem the guitar / amp seemed to behave itself much better, however I did notice it cut out again during our encore.

When we came off stage Simon told me that, as he was walking on stage at the start of the gig, he’d had tripped over all my cables – evidently sending my channel selector flying across the stage and pulling out a few connections… mystery solved.

After we’d done our usual routine of meeting people at the signing desk I got chance to talk to Jonathan Schang – the drummer from Distract 97.  He was a lovely guy and gave me one of their albums. 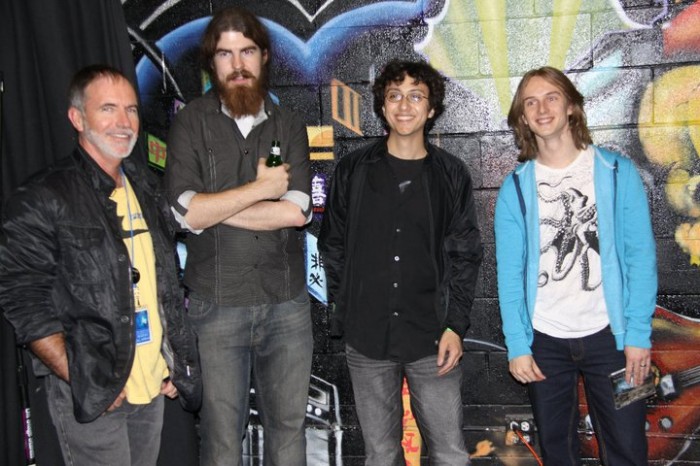 The venue offered us a late night snack to take back to our hotel so I opted for nachos. 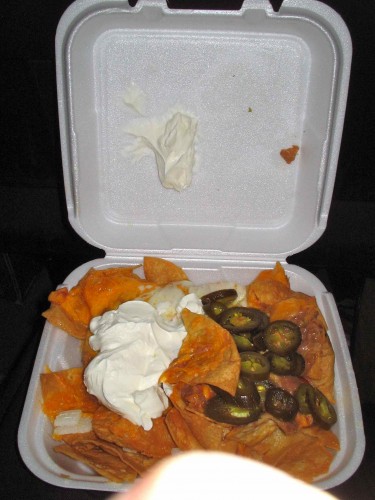 Simon ordered a chicken burger but, to his horror, found it contained onions – not a nice experience for a man with a phobia of onions (when ordering food at a restaurant you’ll often hear the sentence, “Does it contain any onions?”). 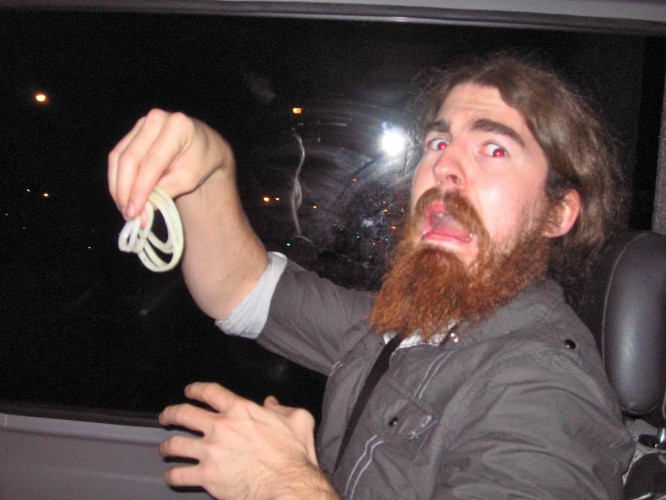 We made our way back to the hotel and I put on District 97’s CD while finishing my nachos – what a GREAT album! 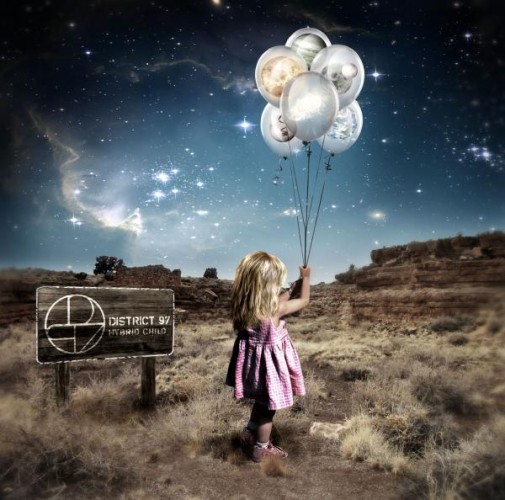