As the venue for tonight’s gig was only five minutes walk from our hotel we didn’t have to meet in the lobby until 2.30pm – bliss!  I spent to morning doing laundry: I was getting desperate – having just done my first day of sock-recycling I was so happy to find that our hotel had a guest laundry room. 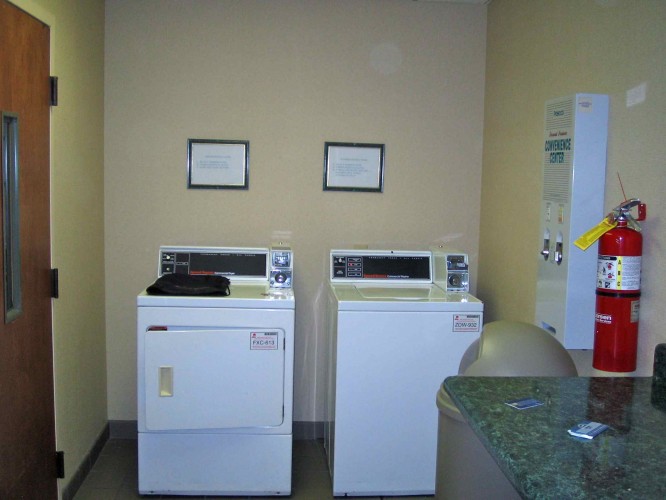 While I waited for the washing machine and tumble dryer to do their work I spent my time filling in a Brazilian visa form online.  When I finished the lengthy process of filling in the Visa form I was rewarded with an error message… so I tried again using a different internet browser and, to my extreme frustration, the exact same thing happened.  I sent an e-mail to everyone saying what had happened and Josh sent one back explaining that exactly the same thing had happened to him – what a frustrating waste of time.

At 2.30pm we met in the hotel lobby and drove to the venue.  On our way everyone was talking about the extreme storm that had happened this morning.  When I told them that I’d missed the whole thing everyone said, “But didn’t you see the tornado warnings on the TV last night or this morning?” – I explained that I’d not switched a TV on since we’d arrived in the US.

When we arrived at the venue I saw a sign of the tornado everyone had been talking about – outside the club was a tree that had been blown down. 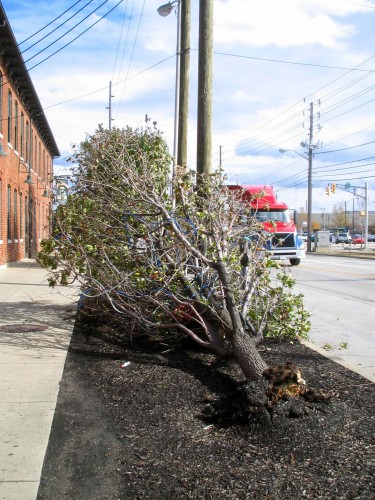 The club was a small blues club with a balcony – really cool and quirky, with a theme of The Blues Brothers running throughout. 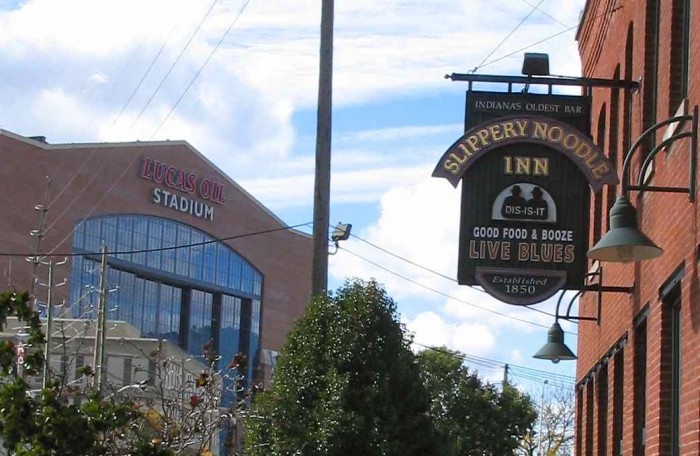 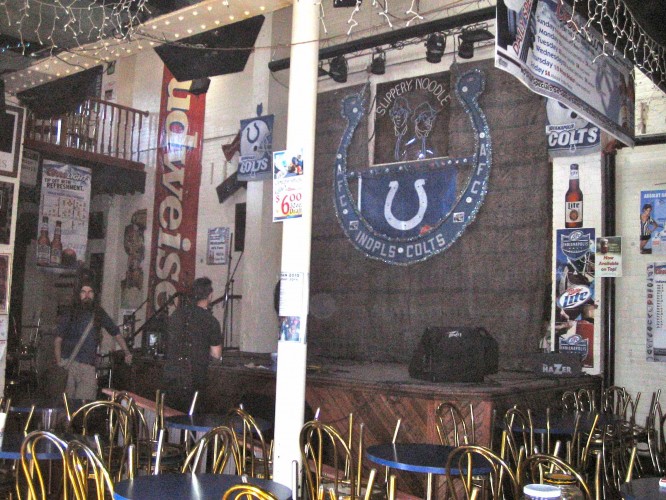 Inside we were greeted by a very friendly house manager who was keen to get us anything we wanted.  Me and Simon ordered some lunch and ate it in the bar while watching a train full of tanks pass by. 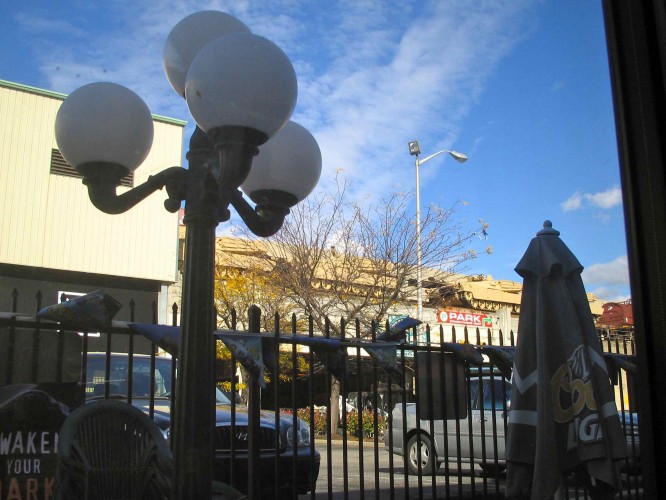 Apparently the Slippery Noodle Inn is the oldest bar in Indianapolis and, upstairs, our dressing room was in the same area that used to be the brothel – a long corridor which contained lots of ‘private’ rooms.  In one of these private rooms was the manager’s office which contained all manner of Blues Brother movie memorabilia, including the actual suits worn by Dan Aykroyd and John Belushi in the film. 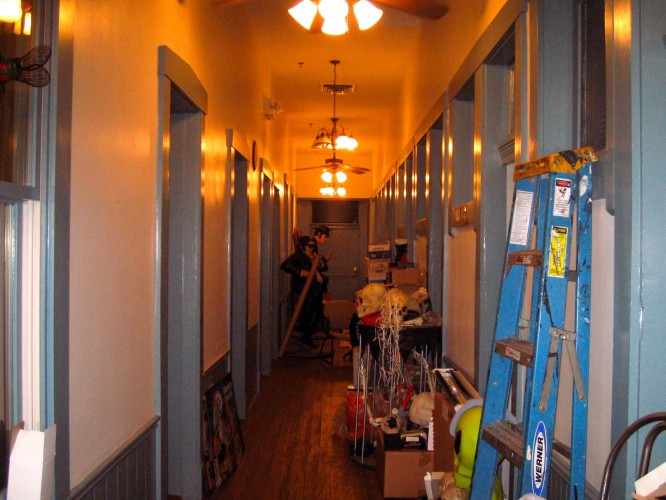 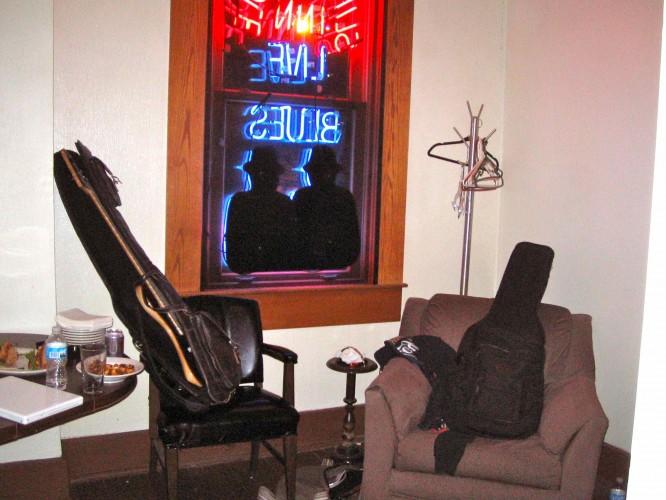 The gig was strange – it was funny to be able to see the audience lit by the same amount of light as the stage; it made for a very intimate set.  On a few occasions we heard a strange echo of ourselves coming through Carl’s monitor – really weird; about 20 seconds after we’d play something it would come through Carl’s monitor.  It was only really obvious when we stopped – in songs like Tarkus when Carl drops out and me and Simon play the ‘AquaTarkus’ theme; when we stopped for the dramatic pause after that section we could hear what we’d just played – so strange.

But the repeat was most obvious in Pictures at an Exhibition.  After the main theme has been played, I play a section of queued unison lines with Carl.  In the pause after the first unison line we heard what we’d just played (the main theme) blaring through Carl’s monitor.  We stopped and looked at Simone – he stared back at us looking as confused as we felt.  We waited for them to find the problem… but the delayed music just kept coming… we waited until the echo had caught up to what we’d just played – I was hoping they would have found the problem by then as, if they hadn’t, there would be no way to check if it had been fixed.  However, as we listened back to ourselves through the monitor an amazing thing happened – when the delayed signal reached the point in the song that we’d just played, it didn’t stop – it kept on going, to the next part of the song – the part we hadn’t even played yet!  Then it dawned on me, I suddenly realised that the video footage we were playing on the big screen behind us had music on it, as Bruce had made each video to sync up with each song – the music we could hear coming through the monitor wasn’t a repeat of what we’d just played, it was the Working Live album version that we’d recorded years ago!  I shouted over to Simone telling him what the problem was and, with that little mystery solved, we continued with the piece.

After the show our house manager continued to take good care of us.  A beer and a take-away carton of nachos later it was time to head back to our hotel.