A long drive scheduled for today, hence the 7.30am lobby call.  After saying goodbye to Tony and Mary Ann (they’ve been staying in the same hotels as us) we hit the road… for all of 10 minutes before our first coffee and gas stop.

When we went to the coffee section of the gas station we were met with coffee cups, the size of which I have never seen before… 32 fluid ounces – practically a litre of coffee.  Faced with the challenge, we filled our cups – I had a litre of mint tea, while Simon went all in with a litre of coffee. 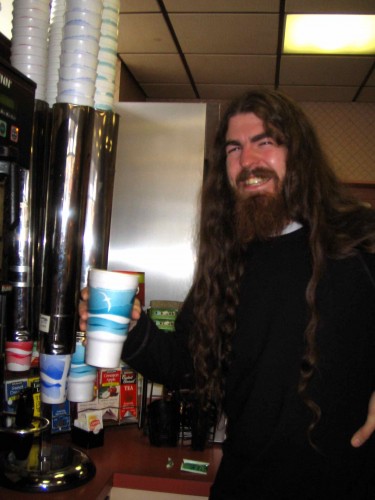 When we got into the van we found that the lids of the cups didn’t have any holes for drinking out of – they only had a straw holes… lucky we got straws. 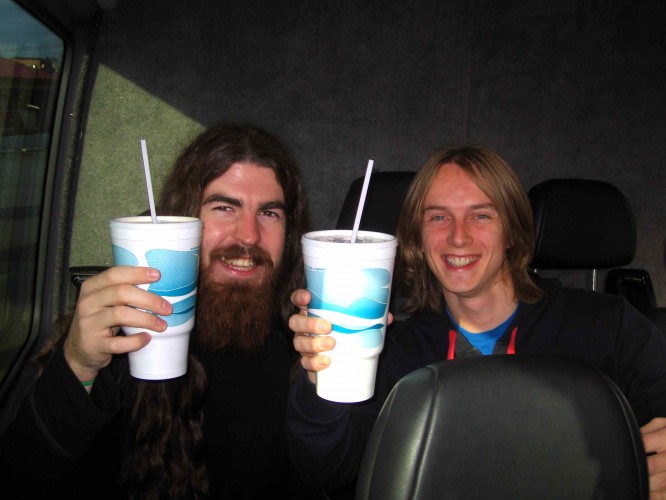 After our first sip of scolding hot liquid it was clear straws weren’t going to be the best way to drink our litre beverages.  So, as one must when on the road, we improvised – biting and tearing to make our own little drinking holes in the cup lids.  Soon we were enjoying our very hot drinks, with a fair degree of caution. 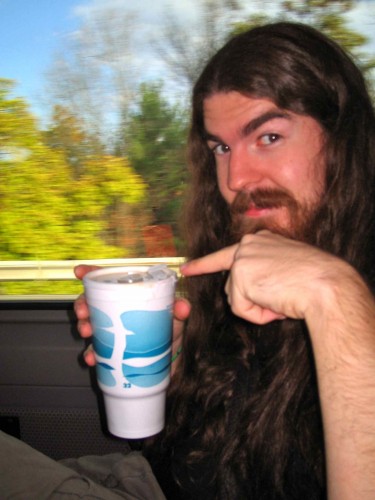 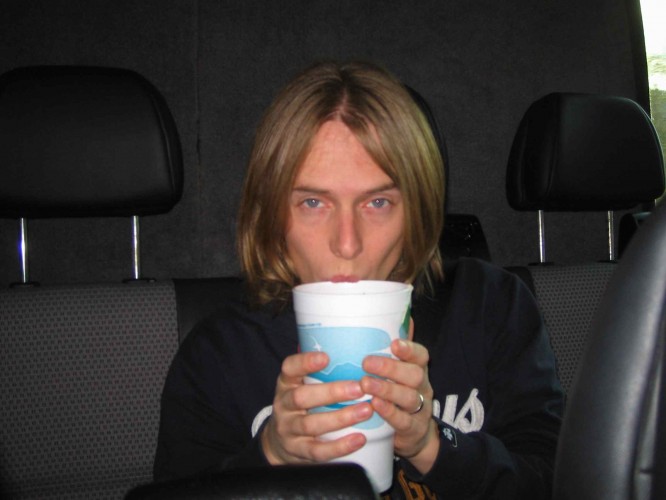 Sometime later we had finished our litre drinks and Simon announced that he needed the toilet – the massive quantity of coffee was taking its toll.  Harry asked if 5 minutes or 15 minutes would be best, Simon replied in anguish, “The sooner the better!”  As we drove for the next 10 minutes Simon’s pain increased – he looked really uncomfortable.  When we pulled off the freeway he started pointing out various objects that he was prepared to pee behind – I don’t think I’ve ever seen a guy so desperate before.

Eventually we reached a gas station, Simon jumped out of the van and hurriedly hobbled towards the shop in search of the restrooms. 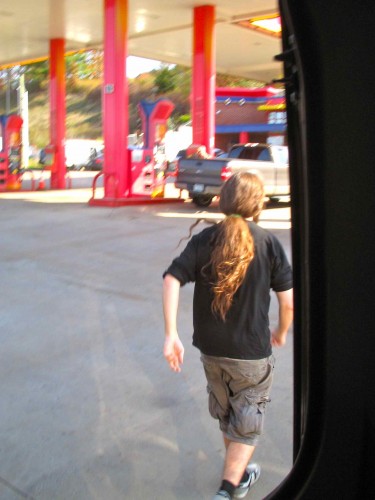 I saw a look of a despair mixed with desperation when he walked in and couldn’t instantly see the bathroom sign… then he spotted it and went straight in.  In the interest of science Simon had decided that he was going to time his pee – it lasted for the time it took everyone else in the van to pee, wash their hands and for me to take a photo of the dramatic outpouring – a total of 1 minute 32.9 seconds! 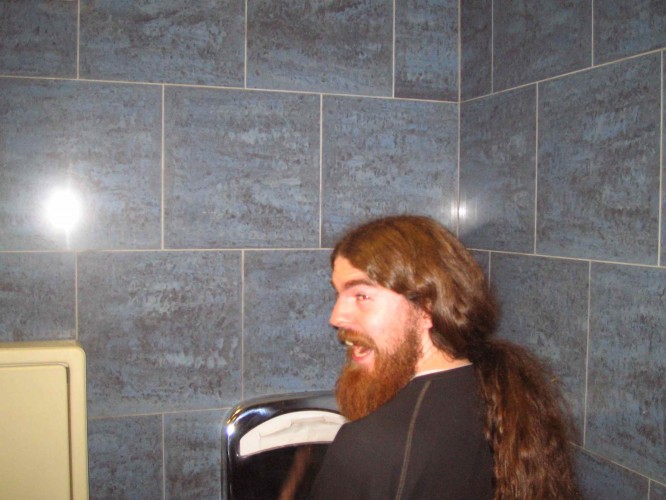 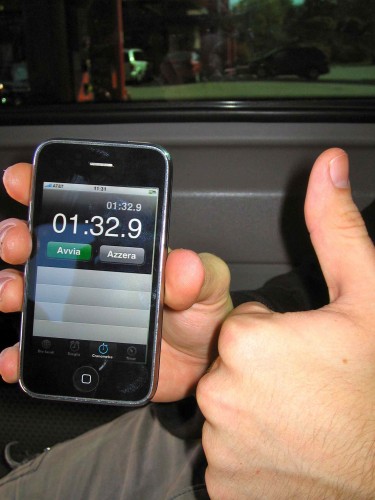 Back in the shop of the gas station we found an even bigger coffee cup – Simon passed on a second litre of coffee, but it made for a good photo opportunity… 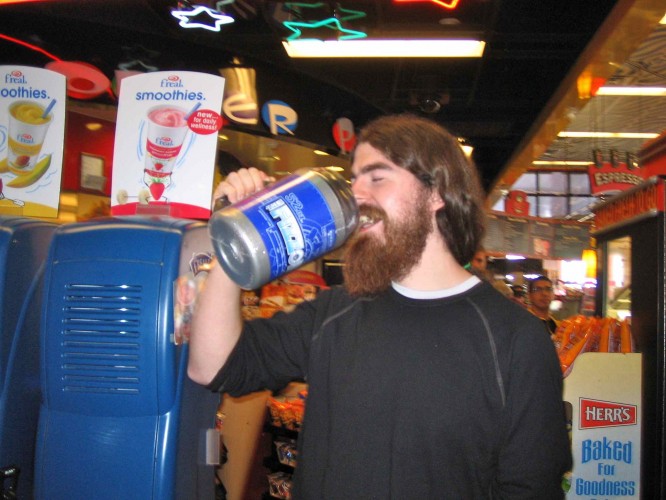 A while later we stopped for lunch at a ‘Cracker Barrel’ – a US chain that combines a novelty gift shop with a restaurant.  Outside were lines of rocking chairs for sale with gift tags on them… what kind of person would spot a rocking chair at a restaurant and think it a good idea for a gift? 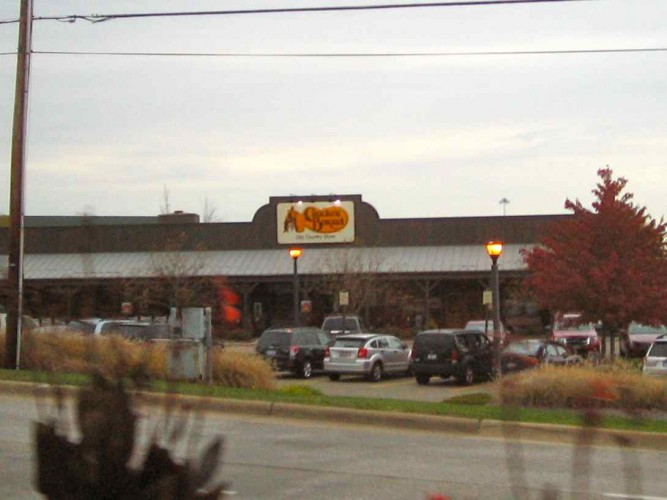 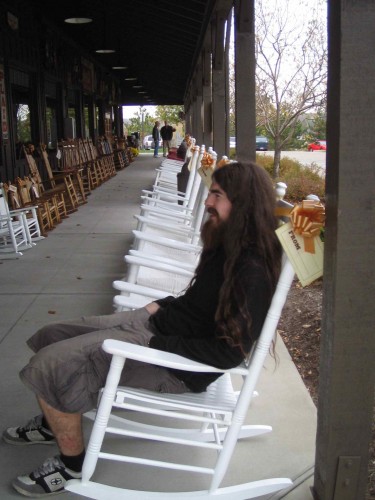 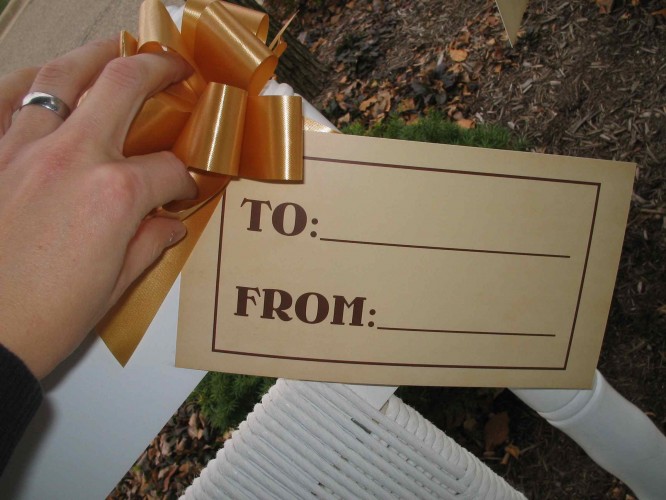 We sat down and, after seeing that the specials board was a little vague, I turned to the menu. 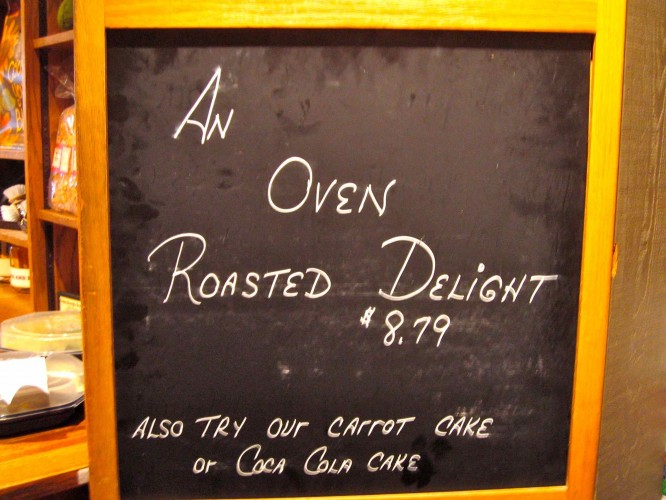 “We know that many folks are watching what they eat…”

Surely, nobody would be dumb enough to think of this as a menu for people watching what they eat… would they? 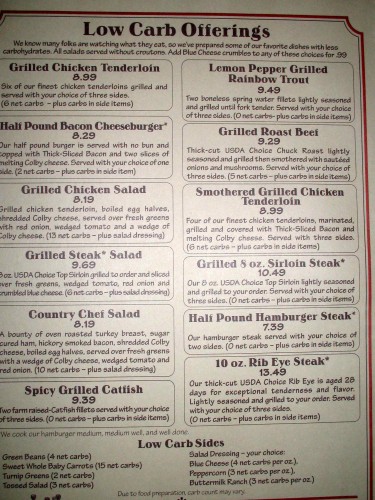 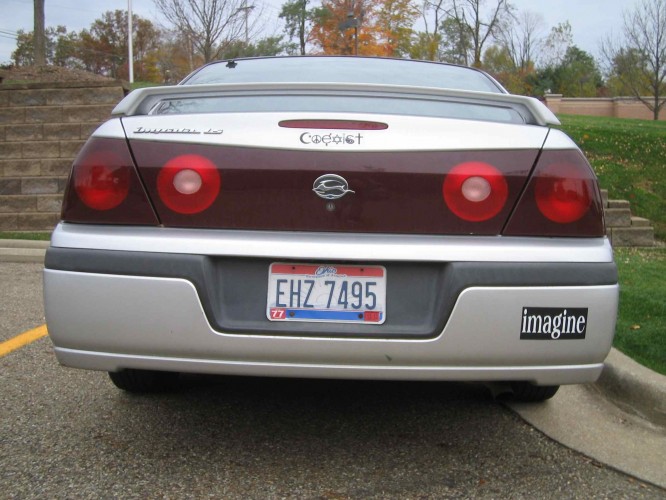 … I decided that, if it were my car, I’d prefer a bumper sticker that said ‘concentrate on the road’.

When we got to our venue – ‘The Beachland Ballroom’, we found a very cool looking VW camper van parked outside – the only way to tour! 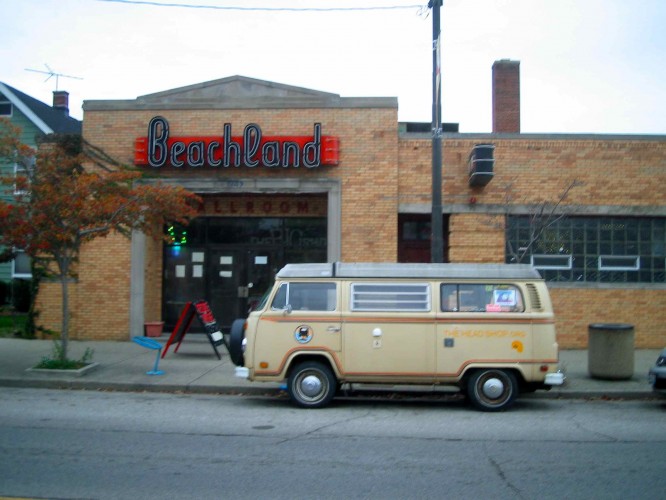 We’d played the Beachland before on our 2006 US tour, but since then they’d added a vintage clothes and curiosity shop which was attached to the dressing room.  Me and Simon tried a few things on and found a few priceless photo opportunities… 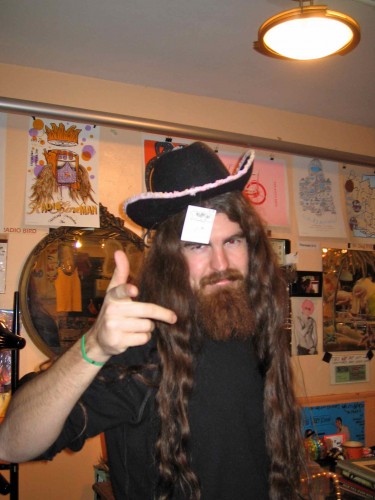 When the time came to soundcheck we ran our usual soundchecking tune – Hoedown.  The sound was great on stage – I could hear myself really well and I was looking forward to the gig. 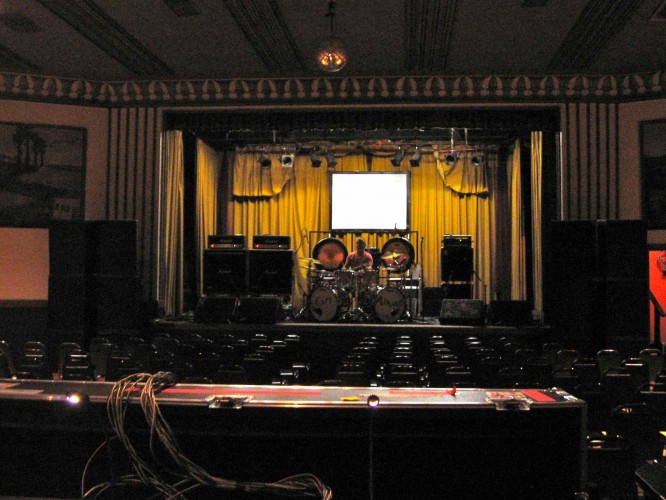 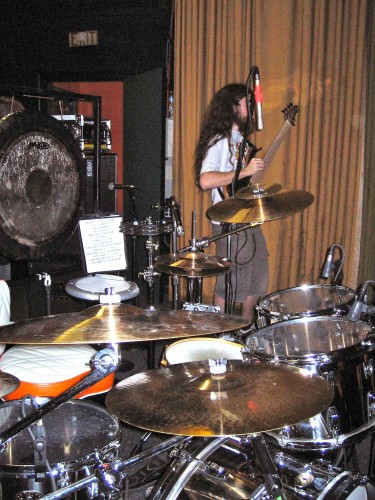 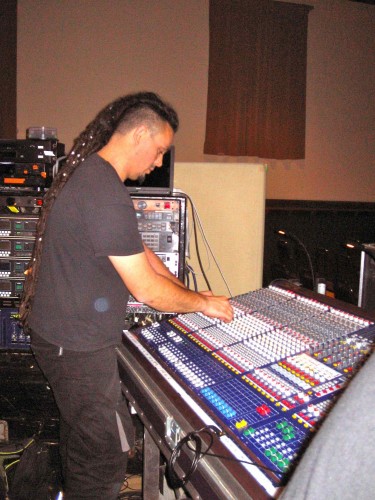 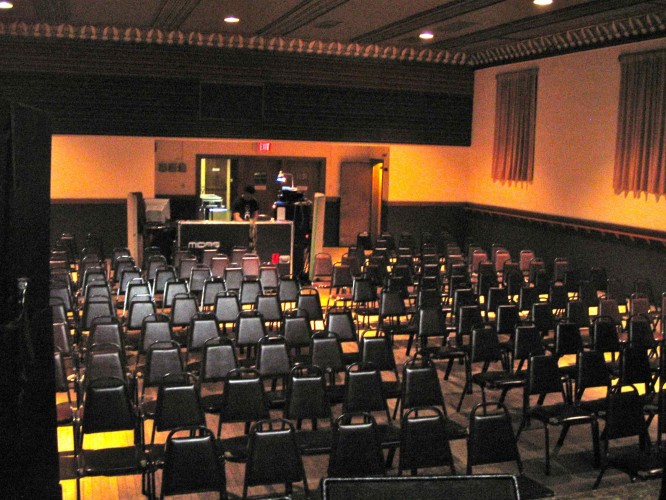 Tonight we were going to have a support band.  We rarely play with support bands but, when we do, I always enjoy mixing with other musicians and listening to them play.  The only problem tonight was that, seeing as the stage was so small and we’d already set up, the support band was going to have to set up around us.  I offered to move anything that would be helpful for them – amps, pedal board etc, but they somehow managed to fit around our stage setup without us having to move a single thing – thanks guys.  I managed to catch a little of their gig, they were a great Allan Holdsworth style 3-piece fusion band. After the gig the crew packed the van and trailer and hooked the two together – they’re getting really efficient at this now.  They looked like a Formula 1 pitstop team tonight.