Our first day off after six shows in a row.  Bizarre as it sounds, I’ve been having such a good time playing a show every night that I really didn’t want a night off – I would have much preferred to have played a show tonight.  That said, I was really looking forward to seeing my parents – they’d come away on holiday to New York for a week with a couple of their friends.

Josh, SImon and myself met in the lobby at 11am and then took the hotel’s free shuttle bus to the nearest station (Secaucus).  At the station we bought our return tickets ($4 for a single trip, $8 for a return ticket – I know a special offer when I see one) and boarded the train for Manhattan. 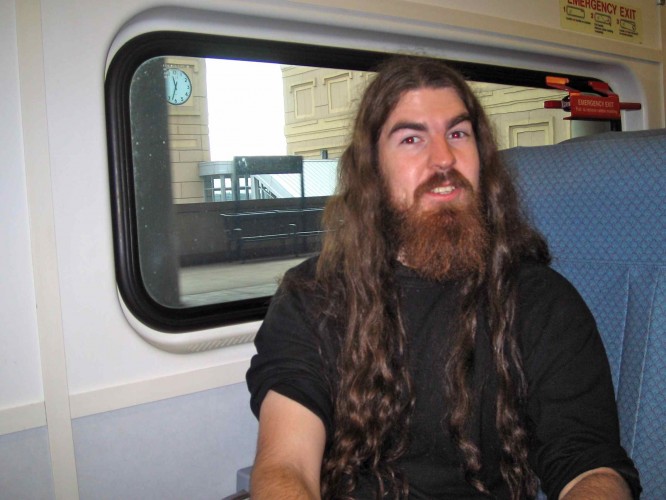 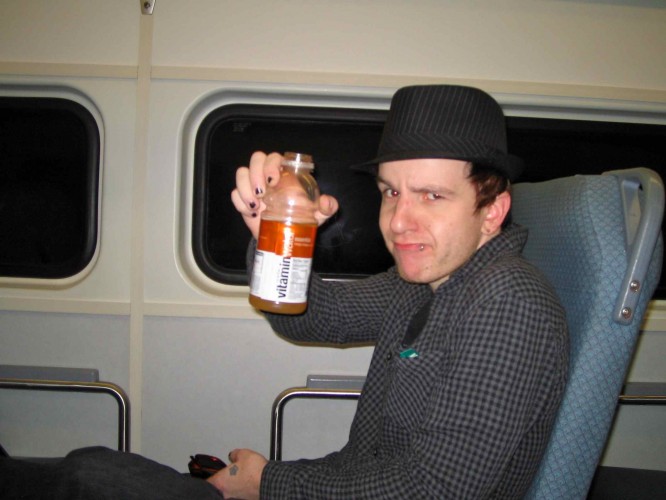 Our train stop put us right next to the famous Madison Square Gardens. 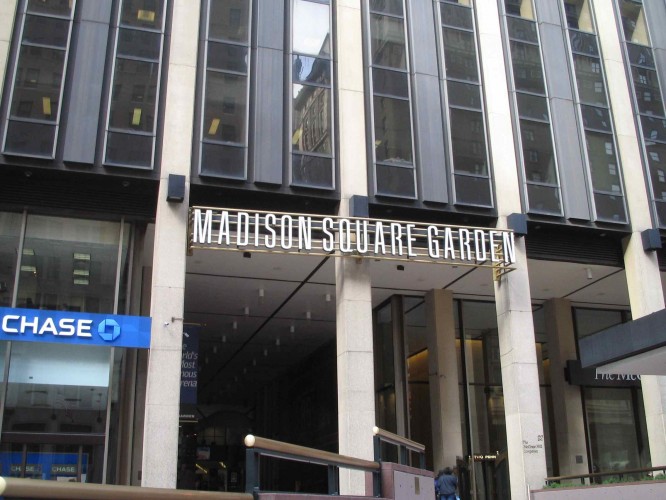 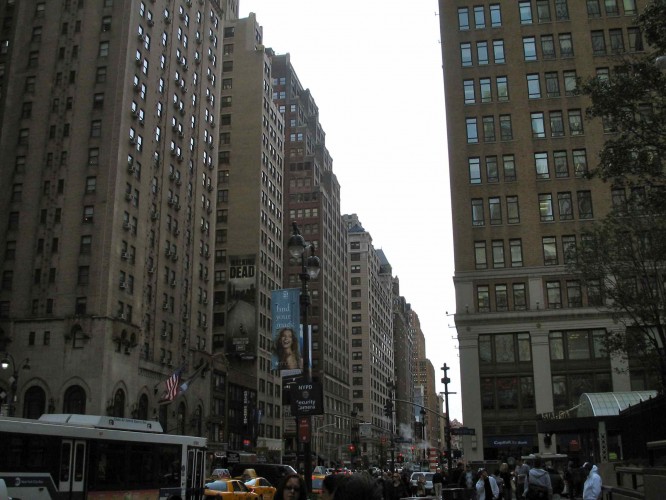 We grabbed a Starbucks and Josh took us on a whistle stop tour of the city. 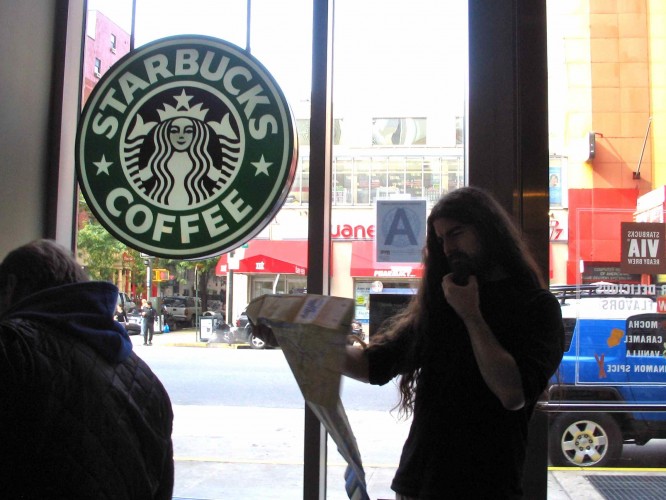 Our first stop was Times Square, from there we headed to Central Park.  On the way we passed the hotel that we’d stayed in on our last US tour – it was closed for refurbishment… perhaps they were fixing their little ‘wildlife’ problem (see 2006 US tour blog entry). 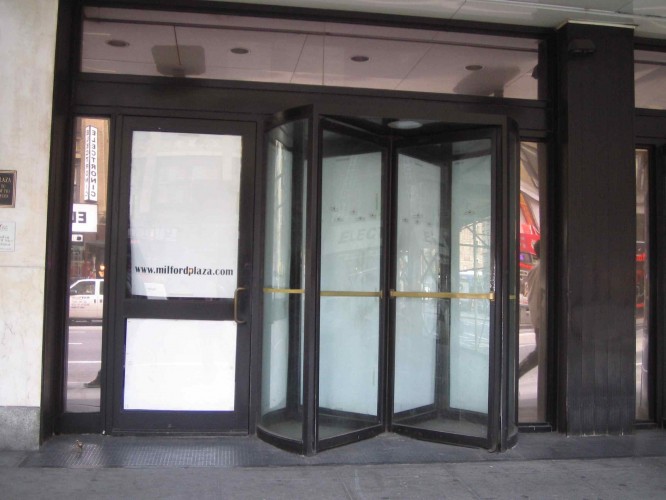 When we arrived in Central Park we each bought a bag of sticky sugary nuts and started to explore.  I saw the most tame squirrel I’d ever come across and they seemed to enjoy sugary nuts.  I happily fed my new furry friend until I spotted a sign hanging on the fence… 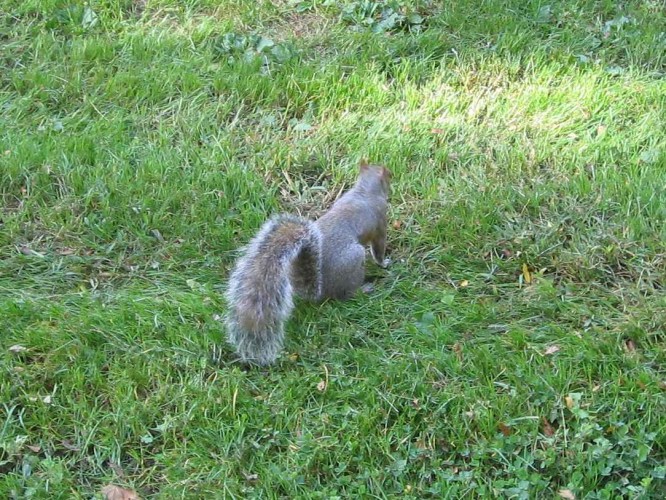 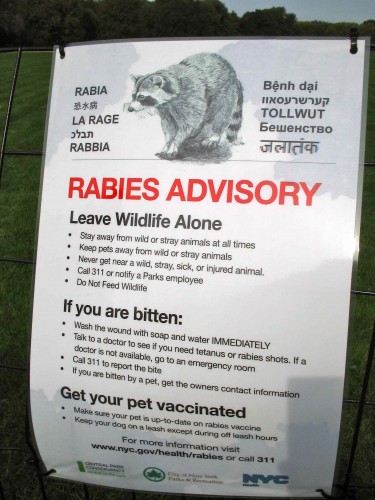 In Central Park we saw a lot of interesting sights, but non quite as interesting as the photo shoot that was going on by the boating lake… 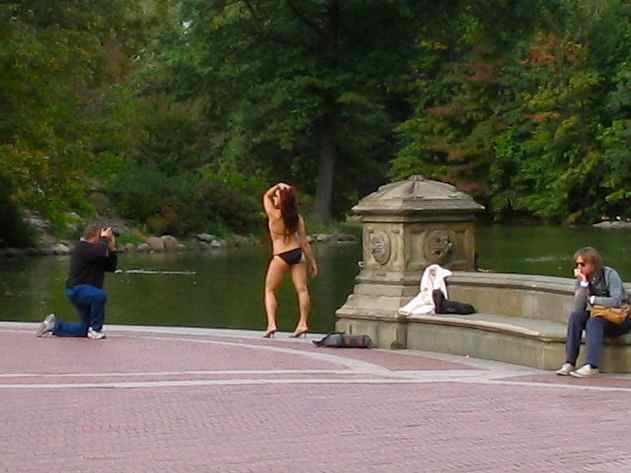 Aside from the glamour mag photo shoot, Central Park seemed to be a hotspot for wedding photos too – we saw two separate newly wed couples there. 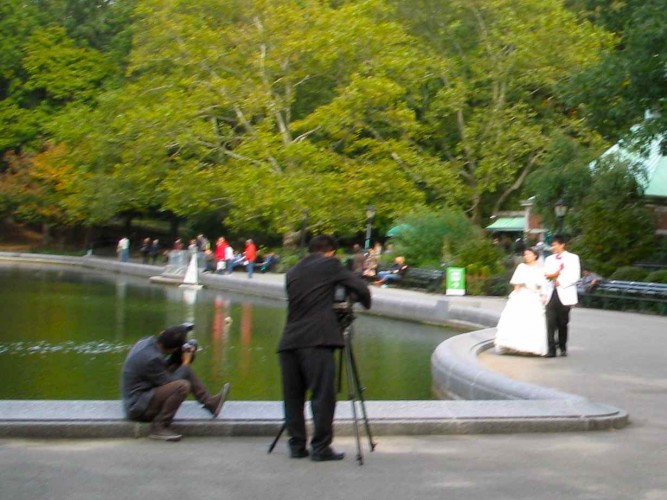 We decided to head to the Met museum, on the way we contemplated having a disorganised game of football… 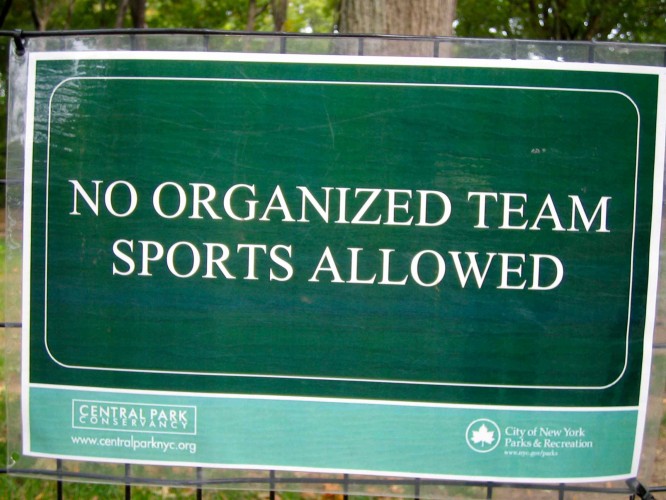 When we got to the museum we found that it was closed on Mondays. 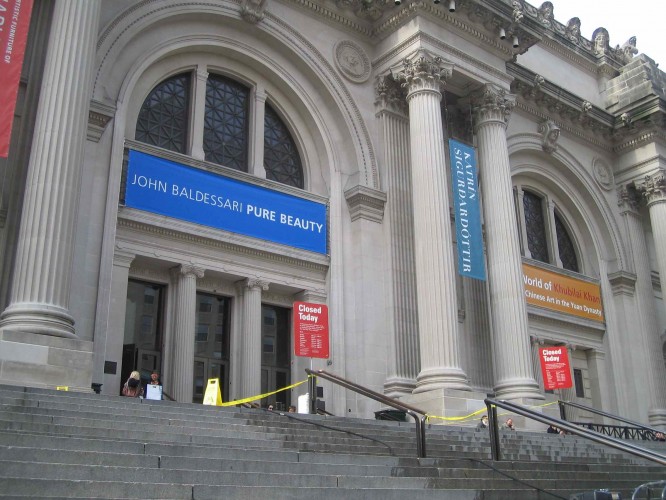 Undeterred, Simon and Josh headed to the museum of natural history while I caught the subway to meet my parents in Times Square.

I was great to see my parents.  They took me to a diner near their hotel and over coffee they told me about their holiday so far and the fact that they suspected that their room had bed bugs.  New York’s bed bug infestation has been big news recently and my mum had watched a TV programme about how to tell if you’ve got them.  Apparently, one tell tale sign is finding their faeces in you bed – nice!  That very morning my mum had found some dark, insect-dropping-like dirt in her bed.  My parents had gone down to the reception and, not wanting to cause panic in the hotel, had discretely told the manager.

We walked back to their hotel, cutting through a beautiful old church with sign asking for donations in an alternative way… 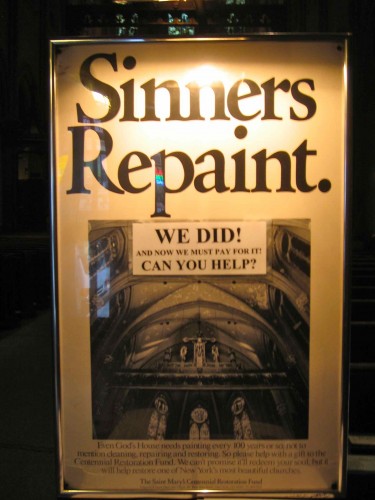 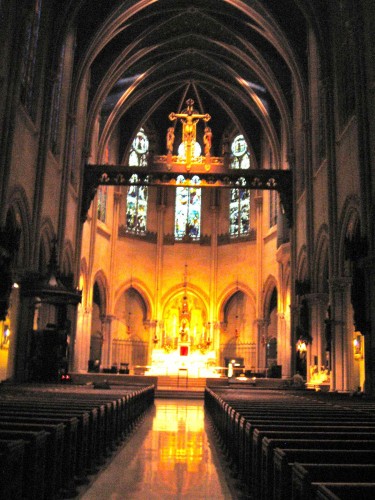 When we got to the hotel we went up to their room to see if the manager had left a message… we found nothing.  My dad went down to the lobby to enquire if there was any news about the bed bugs.  While he was down there a thought occurred to my mum:  when they’d first arrived at the hotel Geoff, one of the friends my parents had come away with, had accidentally ripped open a sachet of coffee in their room – the coffee had gone everywhere.  As a test, my mum ripped open another sachet of coffee and sprinkle a few specks on the bed… instant bed bug droppings!  My dad return and told us that the hotel staff had been scouring the internet, researching bedbug droppings and that the cleaning lady was going to completely strip the room tomorrow… then we told him that the problem was simply coffee!  We laughed for a while and then told the cleaning lady that the manager didn’t think the room had bed bugs and so not to bother stripping the entire room – that seemed to satisfy her. 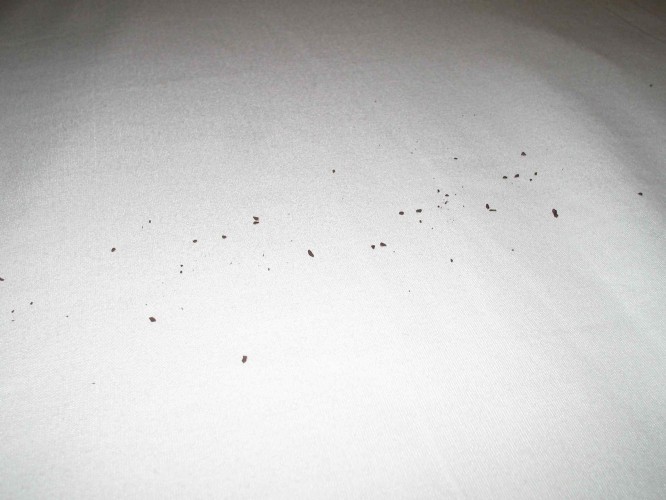 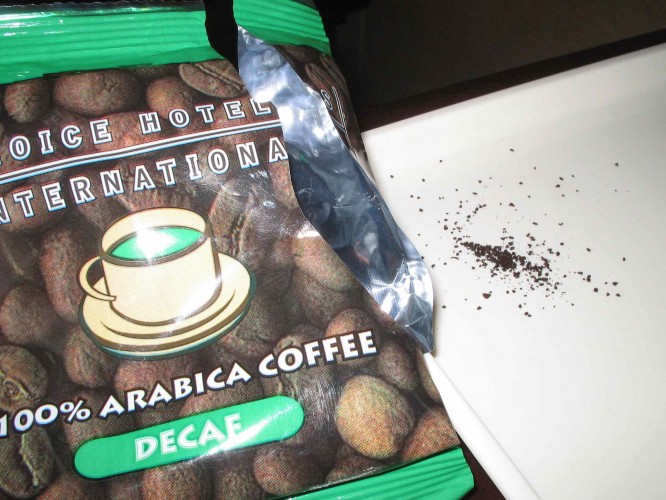 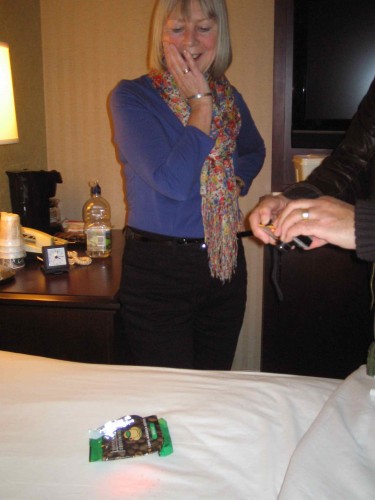 After the mysterious case of the bed bugs had been solved we headed out to find the famous Manny’s music store – the place Hendrix used to buy his guitars in New York.  We spent a while looking for it, asked a couple of people, but in the end we gave up and went into Sam Ash – an American music store chain.  Inside we got chatting to a guy behind the counter called Jason, he explained that the shop used to be Manny’s but Sam Ash took it over – I’ve no idea why they decided to change the name, Manny’s should be a tourist hotspot.  On the wall of the shop hung a large poster dedicated to Les Paul, who I was lucky enough to play with when we were last here in 2006. In the evening we headed to ‘Little Italy’, an Italian district in New York, and met up with Simon, Josh and his friend Mona for some very expensive (but tasty) Italian food. After the meal I said goodbye to my parents and their friends and then Simon, Josh, Mona and myself headed to a roof top bar on the top of a skyscraper.  The bar was called the 230 and it had the most amazing views of New York – with drink prices to match!  In the doorway of the roof top was a coat rail full of red dressing gowns – standard issue in this chilly roof-top establishment. 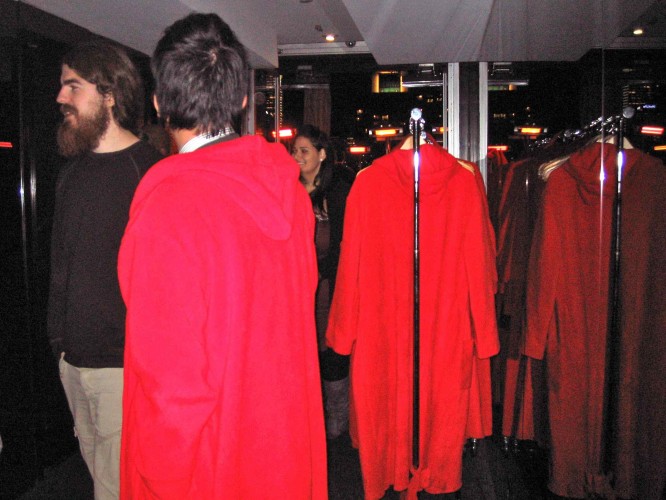 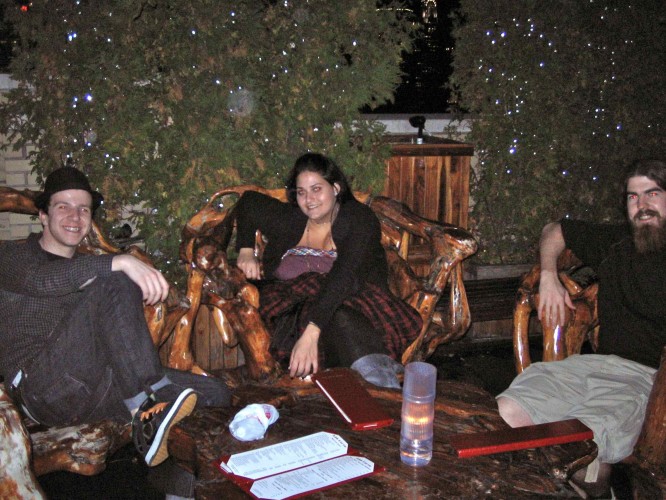 After we’d finished our drinks we said goodbye to Mona and got the train back to our hotel. 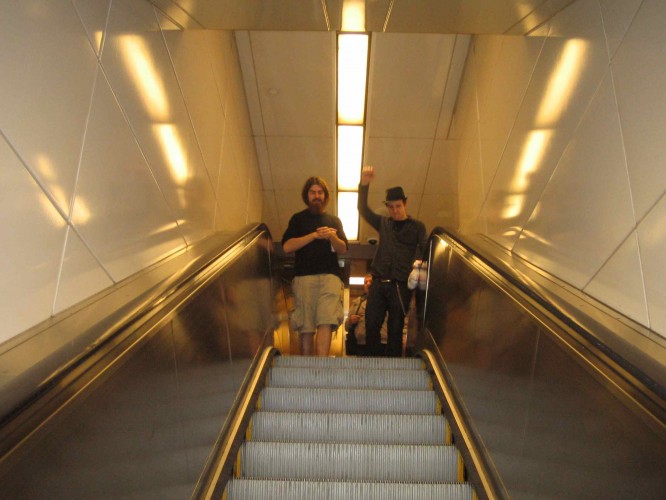