The day started when we met at 9.30 in the lobby.  The promotor had arranged to pick up the medication that was stolen from Carl’s bag, but some legal technicality prevented him from doing so.  We said goodbye to him and headed out a side door where Harry was waiting for us with the van.  We got in the van, and were about to close the door when Bruce announce, “Hang on, I think I lost my wallet”.  We watched as he frantically emptied the contents of his bag onto the seat with no success – the previous night’s incident had made us all a little more security conscious.  By this time he was really starting to panic.  He said he thought he might have left it up in his room so he dashed back into the hotel and, 10 minutes later, he returned with he same worried look on his face.  When he got back into the van he started to empty his bag again – still no luck.  Somebody suggested that he might have dropped it in the lobby and that it might have been handed in.  Josh went into the hotel to ask at the front desk while Bruce continued to examine every pocket, crease and fold of his bag.  After some time Harry turned round to help to look – no sooner had he turned when he asked, “Is that it?”.  The wallet had dropped under the seat when Bruce had put his bag in the car.  Embarrassed, Bruce announced that he was going to buy everyone lunch for making us wait… we decided that we should hide his computer just before dinner.

Our first stop we the Montreal Apple Store so Carl could pick up a charger for his ipad (another thing that was in the bag). 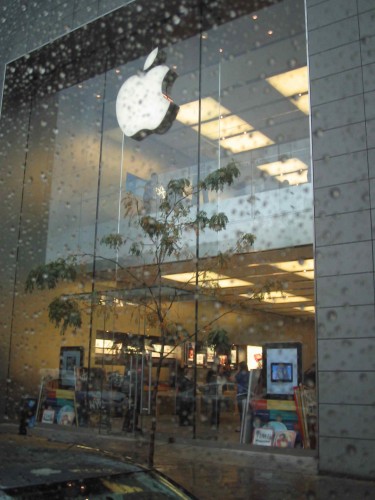 The weather was wet and windy – not ideal when one window of your van is covered with a plastic sheet, secured with Gaffa tape. 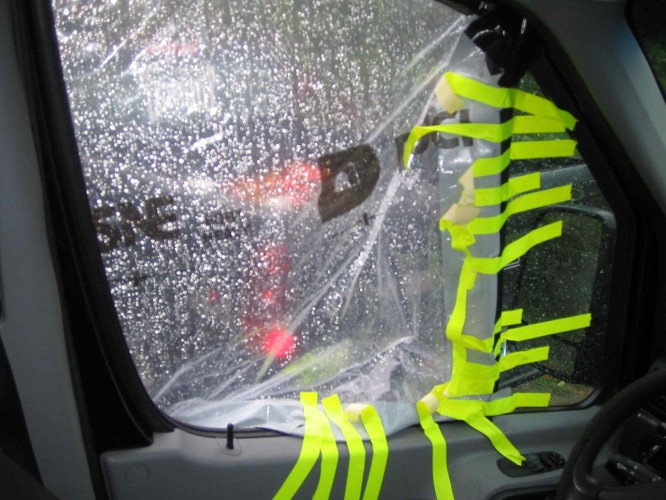 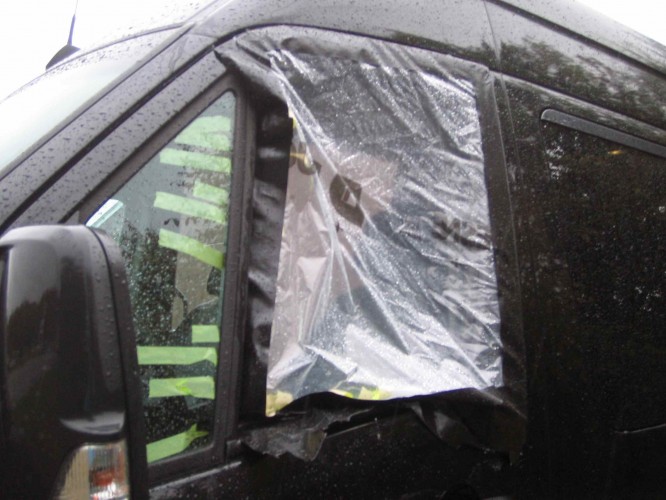 At regular intervals Carl would lean over Harry to re-apply tape to secure the plastic which, pretty soon into the drive, was flapping around wildly in the wind.  The noise upfront was deafening and it was amusing to hear Carl and Harry trying to have a conversation, shouting at the top of their voices. 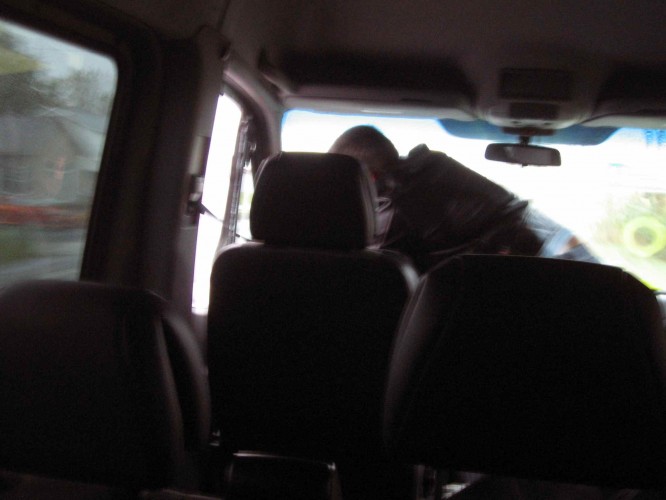 When we got to the boarder we were expecting a much longer wait – US security is usually really tough.  However, when we pulled up to the control booth they asked us about the broken window – Harry told them all about how we’d been broken into the previous night and I guess they must have taken pity on us as they waived us straight through; no questions asked about what we were coming into the US for or about what was in the back of our van or trailer – they probably thought we’d been through enough hassle over the past 12 hours. 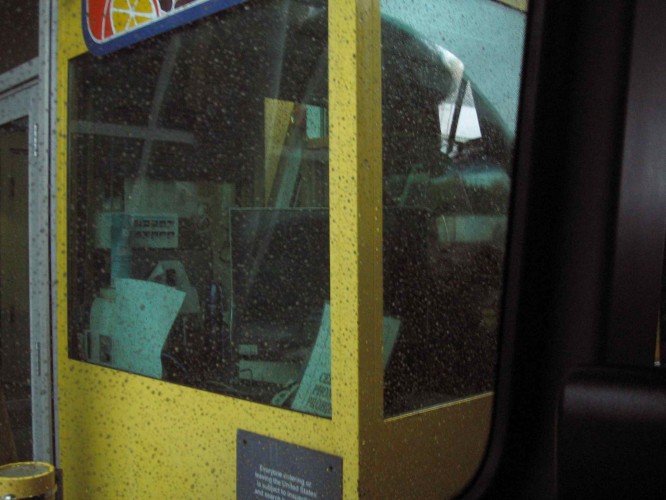 Once we were over the boarder we stopped at the first gas station we came to and went to see what we could find to eat.  I was amused by the adhesive toe warmers they were selling… 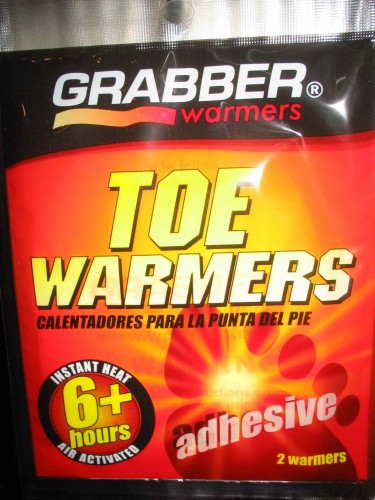 …  But the real find was a game of ‘Beer Pong’.  Josh explained to me that Beer Pong was an American game where two players each half-fill six large plastic cups with beer and then proceed to throw ping pong balls at each other’s cups – if you get a ball in your opponent’s cup then he has to drink that cup of beer in one.  Once you get a ball in all six of his cups then he has to drink whatever beer you have remaining.  I don’t know what the drink-driving laws are in America, but I thought it was hilarious that they sold a drinking game in a gas station! 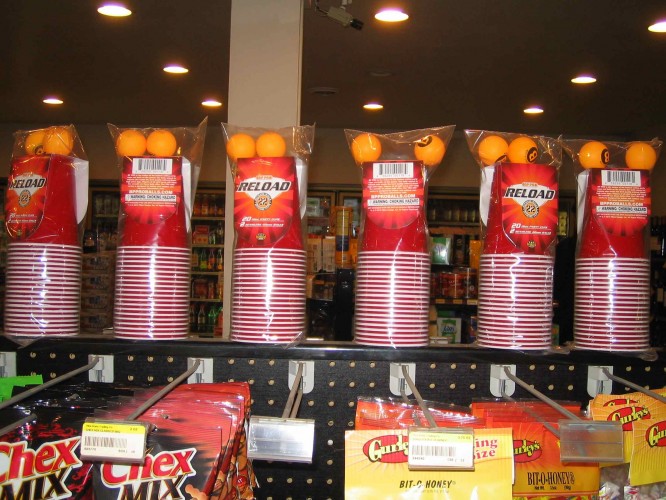 When we arrived at the venue for the evening, we found it was quite a small hall with rows of chairs set out (it looked a little like a town hall). 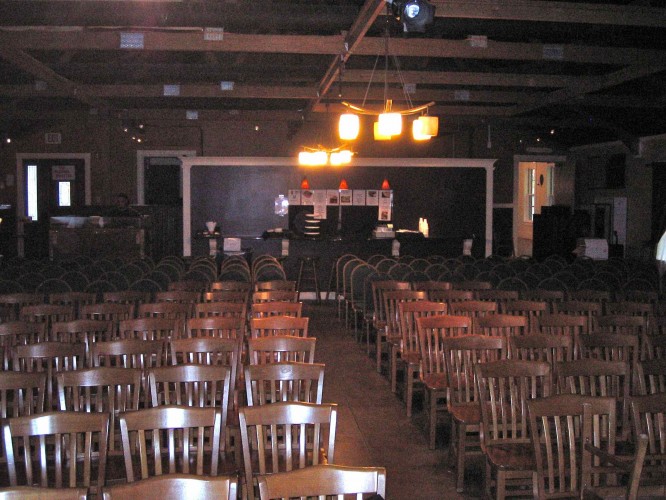 We were met at the door by the promoter – a very friendly guy who was eager to look after us.  When we asked for coffee he explained that he didn’t drink coffee and so wasn’t great at making it, but he immediately got another guy from the venue to make us a pot.  When the coffee was brewed the promoter went to pour it and we saw that there was a small amount of VERY black looking coffee.  This pot of rocket fuel was earmarked for Carl and Simon but my pot of decaf was equally as strong.

While the crew were setting up the gear, Bruce took the van to have the window replaced.  He also called in at a phone store, where he was able to replace to phone charge that had been stolen as well as a pharmacy, where he’d arranged to pick up Carl’s medication… the glamourous life of a rock and roll manager!

Even though we were strapped for space on stage I was adamant that I was going to run stereo amps again tonight.  I started the soundcheck with the two amp heads stacked on top of each other… 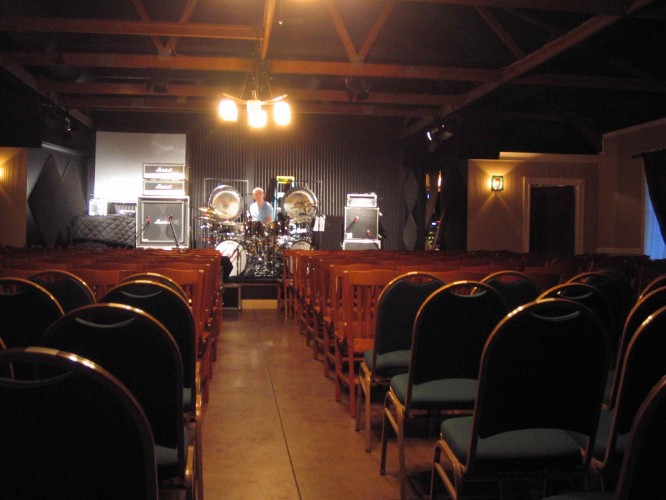 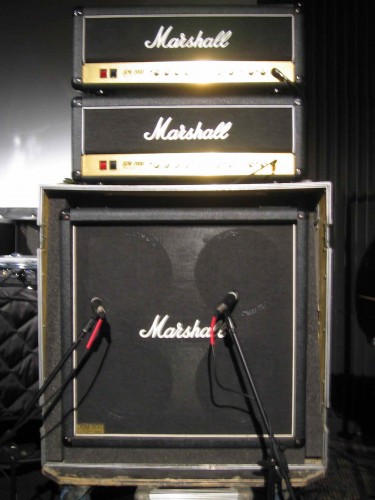 …but then Harry put the video screen behind me and we saw that half of it was blocked by the amps.  So I did the gig with one amp on the cabinet and the other on top of the piano in the corner of the stage.

The gig was great – lots of energy and lots of fun.  The audience was great and it was really good to meet some of them afterwards at the signing desk.  Some of the people I met told me that they were going to be coming to tomorrow’s gig – that made me think about how I could make my solo spot different for them.

That night we drove an hour and a half to a hotel in the town of the next gig – meaning that we could get a late check-out and a bit of a lie in.  Simone, Josh, Simon and myself passed the time in the van playing scrabble on Simone’s ipad – something that has become a regular fixture on this tour.  For an Italian guy who speaks english as a second language, Simone plays a mean game of scrabble, but the undefeated champion of the tour is Simon – when he’s not playing bass or Scrabble he can be found doing crosswords – a real word buff. 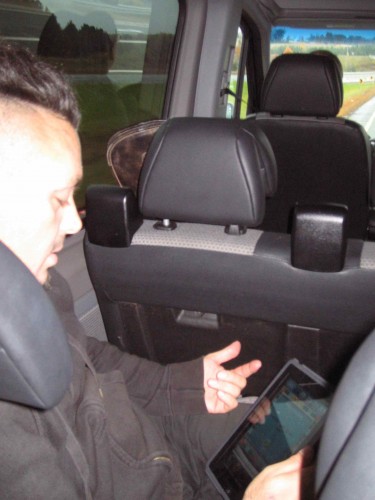