I woke up at 7am again, having set my alarm for much later – I’m still not coping well with this new time zone!  After an early breakfast and some time writing up my tour blog it was time to hit the road.  We met in the lobby at 12 noon and then drove to our next town – Toronto. 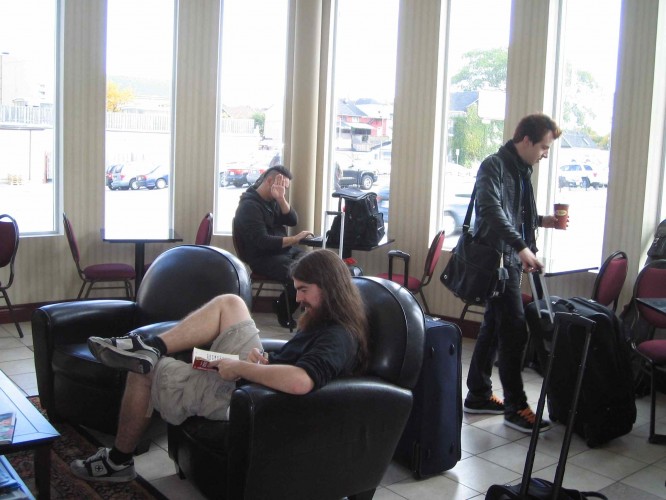 It didn’t take us long to get to Toronto and find the club.  By about 1.30pm we pulled up and headed to a Brazilian deli/diner opposite tonight’s venue.  On the way to the diner I noticed that Toronto held our tour manager, Harry Ford, in high regard. 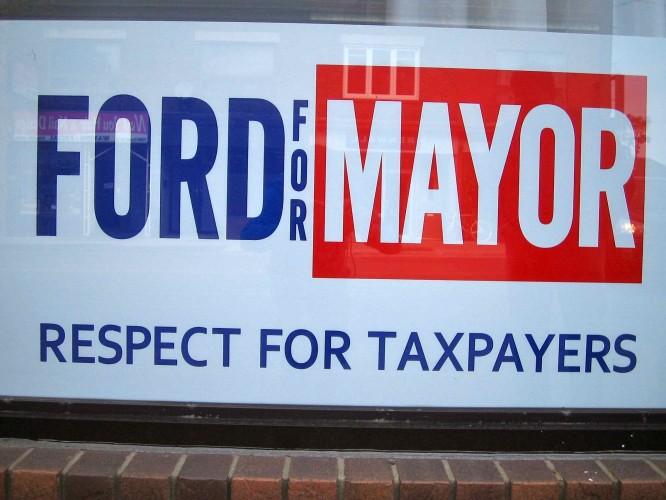 Then we spotted a poster advertising some competition for our show, or perhaps this could be the support act?… 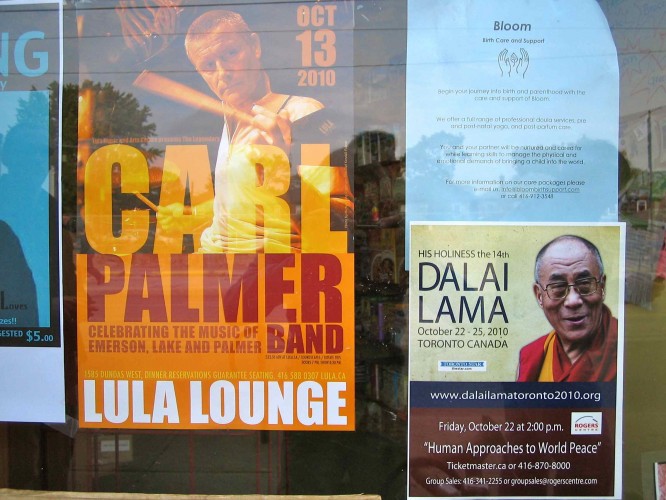 In the diner we got given menus and sat down to make our decision – on closer inspection, I could tell that this place wasn’t big on salad… 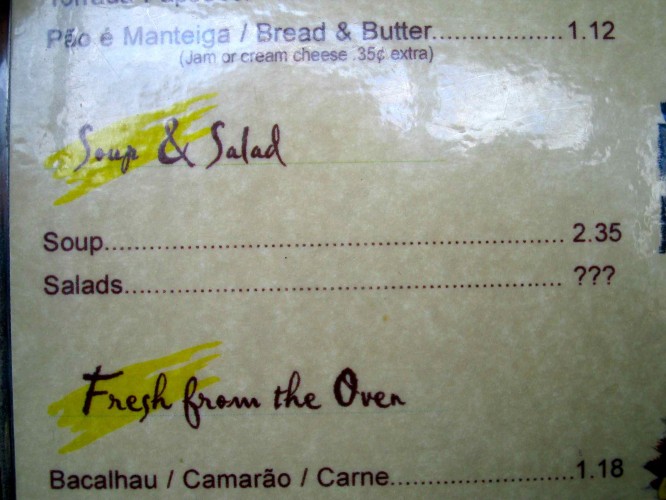 I had a great vegetable soup and a not so great cheese and processed ham toasted sandwich, all washed down with a decaf latte.  Then, from the window of the diner, we spotted a message for someone called Harp, stuck in an apartment window… 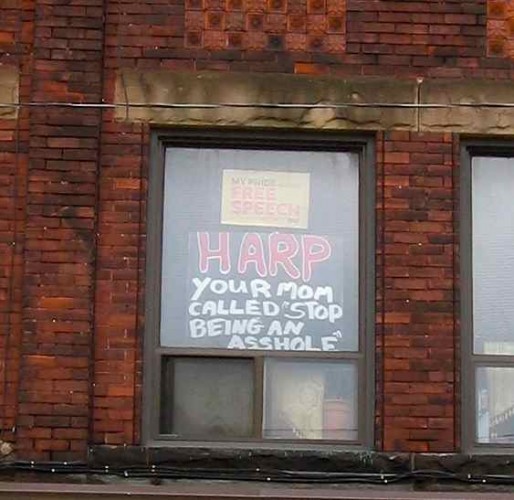 We went across the street to the Lula Lounge – the venue for the evening’s gig and met Tod, the manager, outside. 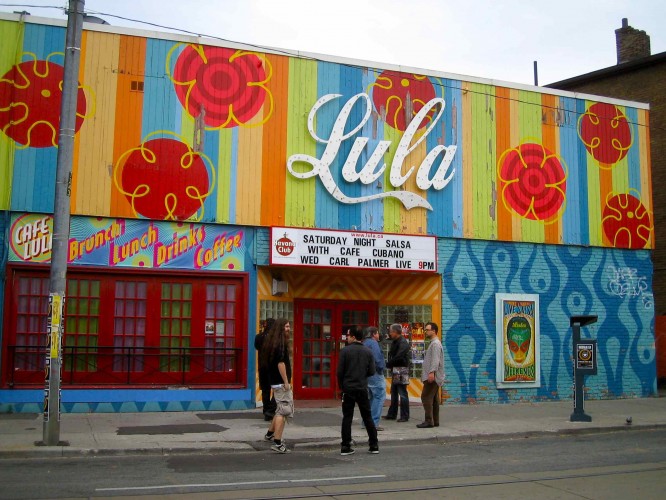 Tod was very friendly and the amount of thought he put into our rider was touching – he explained to me why he had chosen each item of our buffet for its nutritional content: making sure we got enough potassium etc! 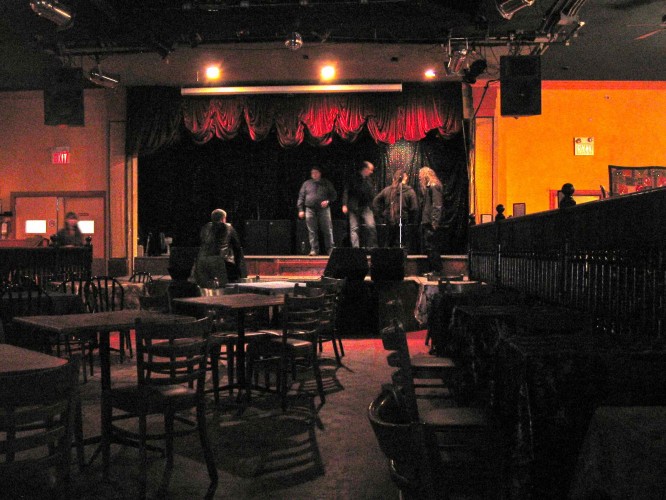 The club was quite a small jazz club and the in-house sound guy told me that this was the first time that they’d ever had a Marshall stack on stage!  I was excited by the thought that not only was I setting this landmark in the club’s history, but I was going to be doing so with TWO marshall stacks running in stereo!  However, a little later, Harry told me that the stage was too small for my two cabs so we’d have to run my rig through one stereo cabinet – OK, so it won’t look as cool, but it should sound the same.  Sadly, when I came to soundcheck, I found only one mic on the cabinet – it turned out that Simone had run out of inputs on the desk, meaning that I had to play the show in mono – doh!

The gig went well.  There were few points that could have been better, but on the whole, I think we’re heading in the right direction with the set – it seems to be settling in nicely.

After the gig we headed out of town to a hotel.  We had a long drive to Montreal the next day, so the plan was to drive about an hour that night.  On the way we decided to stop at McDonalds.  I’ve not had a McDonalds in over 10 years and I usually can’t stand cheap fast food, but I thought I might give it a try.  I ordered a Big Mac with fries and a bottle of water.  The first thing I noticed was that the water was a brand called Dasani – a brand that was banned in Europe as it contains ingredients known to be carcinogenic… not a good start! 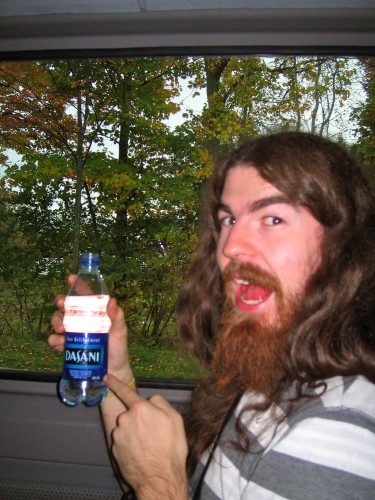 After a visit to a fly-infested McToilet, we returned to the van to eat our feast.  The first thing I noticed was that the Big Mac was a LOT smaller than I remembered.  Not only did the burgers look a lot thinner, but the whole thing seemed to have shrunk.  The meal tasted OK but afterwards I did feel a little sick… and a little less healthy! 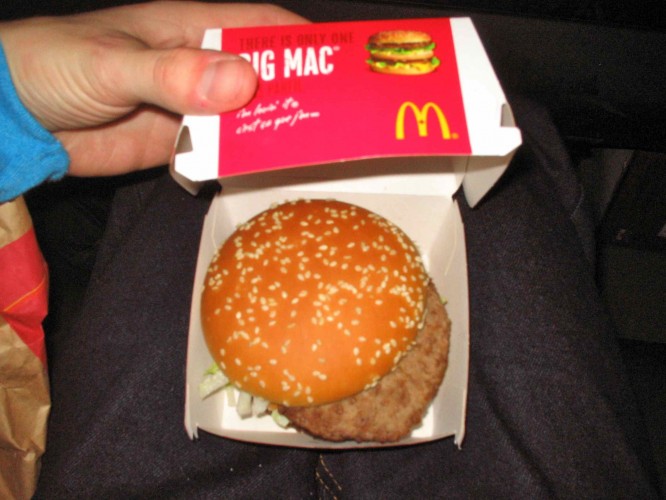 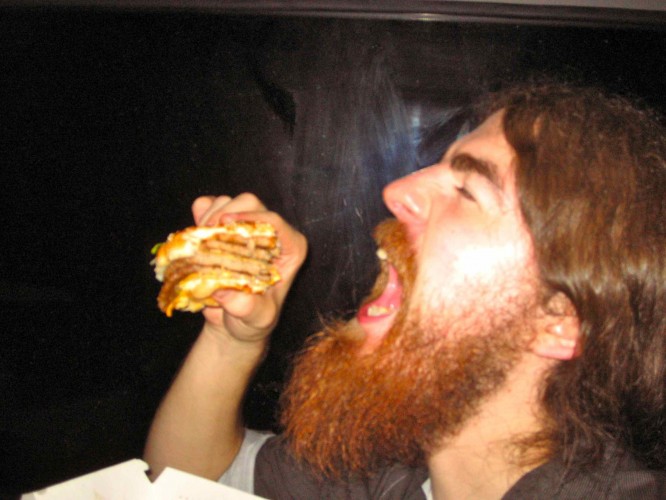 When we checked into the hotel I found that I had a ‘Jacuzzi Suite’ – pity I didn’t get chance to enjoy it.  I collapsed into my bed and set my alarm for 9am – 30 minutes before we were due to leave the following morning.