Again, I needn’t have bother setting my alarm – my UK body clock woke me up at 7am.  I went down for another early breakfast and then spent the rest of the morning checking that I knew everything from the set – running everything in slow motion trying to transfer it from my finger memory to my brain (quite often, when you’re playing something that you’ve played before, you find that you don’t actually know in your head what to play but you can watch your fingers playing the part note perfect, almost as if they have a memory of their own.  This is all well and good; however, if you’re a control freak like me, once you get on stage you start thinking ahead to the sections that are coming up… now, what I should think is, “Well, I know I can’t actually remember how that next section goes, but I know my fingers will remember it, so I’ll just trust them to do their thing while I stand here and watch them”, and this approach does work more often than not, however, a good percentage of the time, my brain’s doubt will override my fingers’ memory and neither me or my fingers will have a clue about how to play a certain section – just because I’ve over thought it.  So, in order to combat this, I try to take a little time to play through everything really slowly, watching my fingers and learning what they’re playing.  Then, when the pressure of the gig comes, both my brain and my fingers know what to play and, because I’m confident about how to play each section, I can just relax and let me fingers do their thing, safe in the knowledge that both my brain and my fingers know what they’re doing – these are the struggles of a musician!  Anyway, I managed to get about half way through the set before it was time to pack up and leave.  We met down in the lobby at 11am and took our places in the van.  A little later Josh and his brother turned up – his brother had brought extra x-box games and an additional controller so three of us could play at once.  A little later Bruce turned up and we set off.

When we set off, Harry asked Bruce if he had his passport in an easy accessible place, as we’d need it for the Canadian boarder.  Bruce responded in a panic – he’d totally forgotten to pack his passport.  Thankfully we weren’t far from Bruce’s house, so we stopped by for Bruce to collect his passport then, after this close call, we were on our way to Canada. 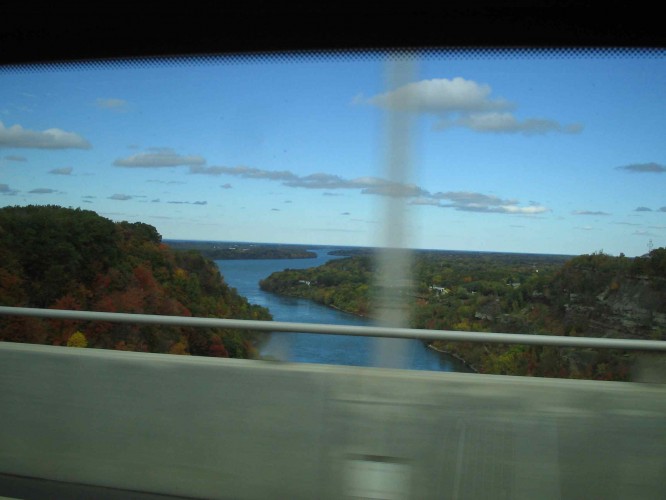 The drive from Rochester to the Canadian boarder didn’t take long.  When we reached the crossing we were asked a few questions about what we were going to be doing there and what we were taking into the country – Harry appeared to answer these questions satisfactorily and we were soon past the first boarder booth.  We drove up to an office and Harry took our passports in to be validated.  After a wait of around 30 minutes our passports were returned and we were on our way to Hamilton. 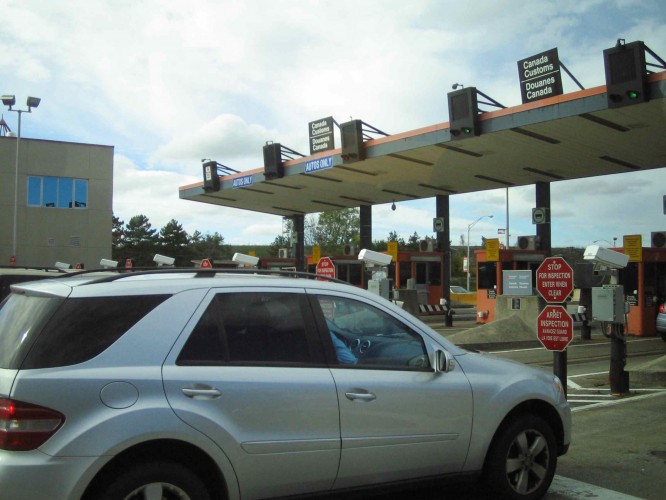 On our way into Hamilton, a Canadian steel town, we drove past some huge steel works with vents shooting flames high into the air. 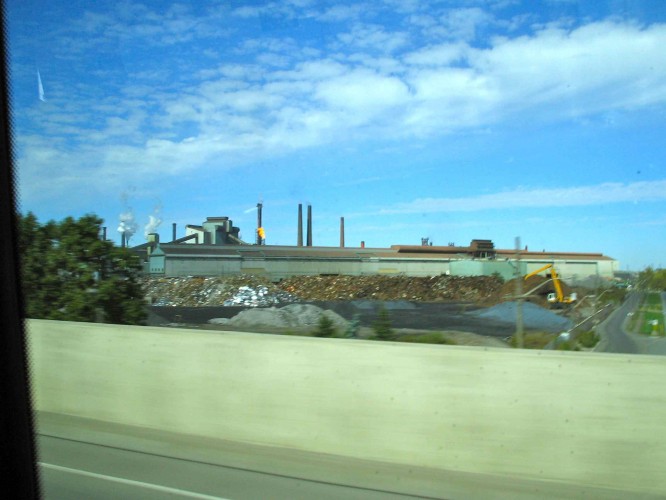 We drove through the city to the club – we’d played there on our 2006 tour, but this time they’d put us in their smaller room.  When we found the load-in entrance memories of the venues came flooding back.  While the crew unloaded the van we went inside to explore. 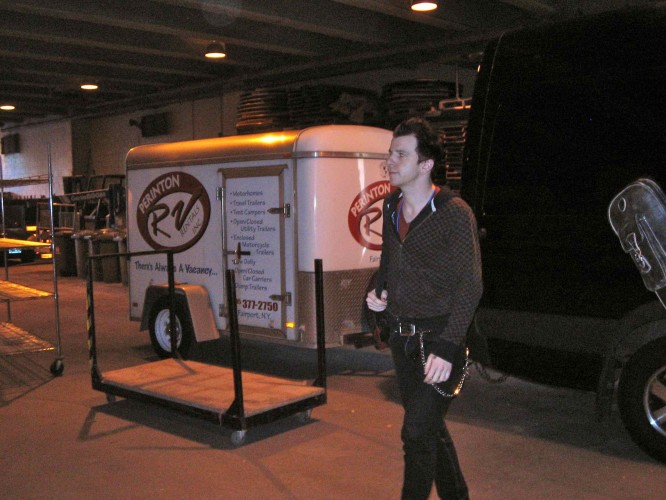 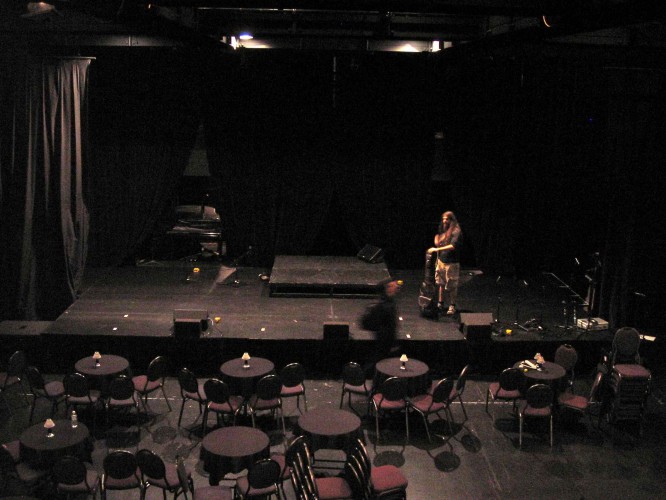 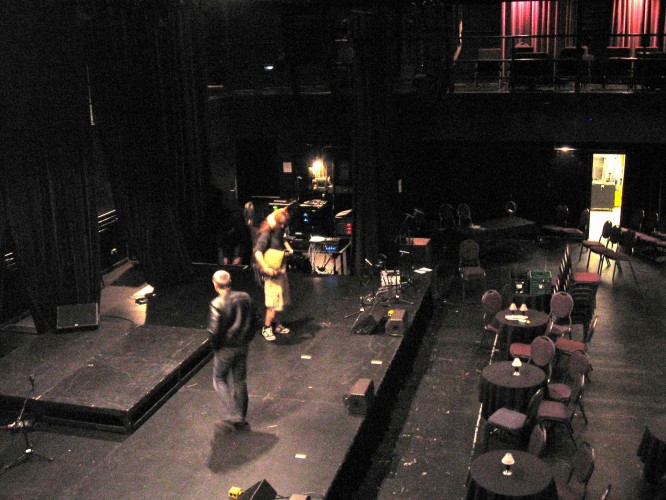 The crew loaded the gear onto the stage and, after a couple of peanut butter sandwiches, I headed to the stage to set up my rig for the first time this tour.  First was the pedal board: 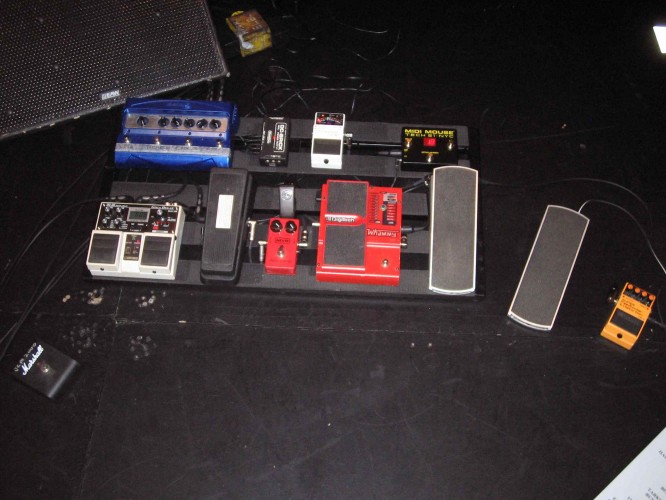 Before the pedal board we have, from right to left:

Volume pedal for acoustic output of my guitar.

Then on the pedal board we have, on the bottom row from right to left:

Volume pedal for electric output of my guitar.

Then, on the top row from right to left:

Finally, to the right of the pedal board there’s the amp footswitch, which is connect to a Bigshot ABY pedal to switch both of my amps simultaneously. 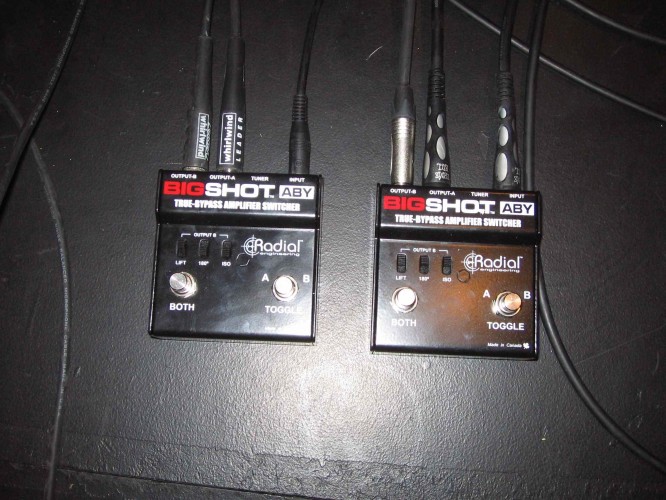 And here are the afore mentioned amps in all their glory: 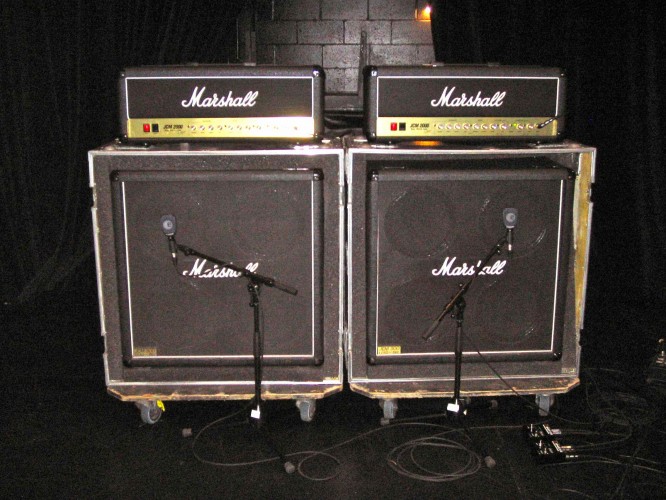 I took a little time to set up the amps, trying to get a balance between the two.  In the end, I settled on a sound that I didn’t feel was quite as good as I’d had in the rehearsal studio (when I used two different types of amps) – but I guess I’ve got the rest of the tour to perfect the sound!

Whenever we sound check, we always do so in a specific order (for whatever reason – I think that’s just the order we did it one day long ago and somehow it became a set thing).  So, as is the custom in this band, the soundcheck began with Carl’s drums. 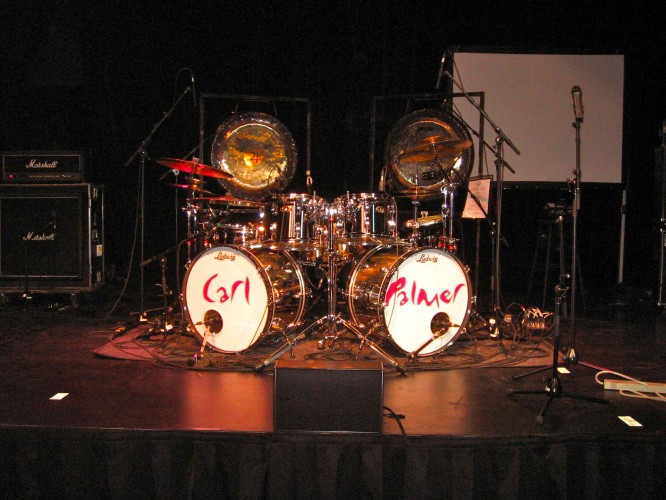 Then it was time for Simon’s first soundcheck in the band.  It didn’t go without incident as his amp kept cutting out so, after some time spent trying to remedy the problem, he had to switch to the spare amp head, which seemed to work perfectly. 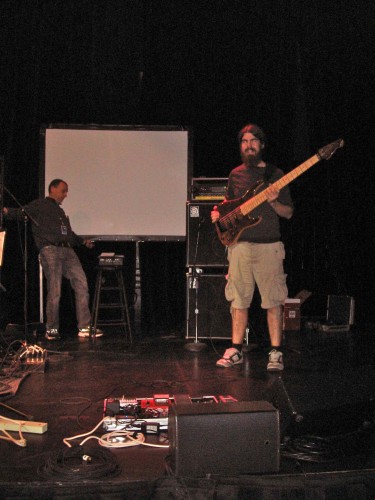 We had chance to run a couple of songs and then Simon and I returned to our dressing room.  I finished my finger-brain information transferal and after that we had a little fun with a metronome – taking random technical exercises and seeing how fast we could play them in unison. 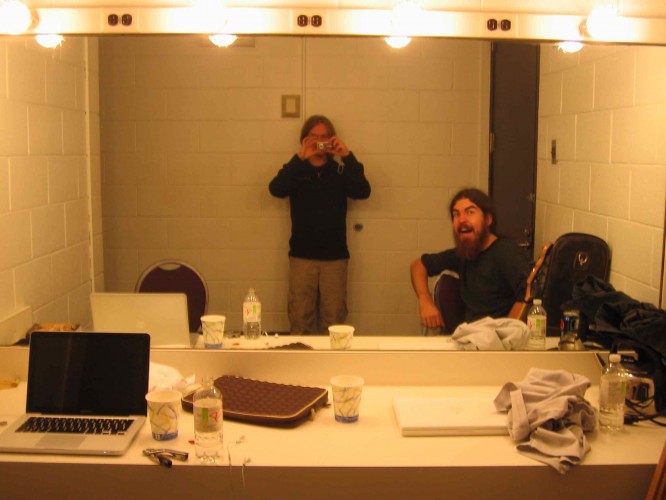 It was good to play the gig.  Being the first gig we’d done as a band and the first of the tour using unfamiliar gear, it wasn’t without its hitches, but we had a good time.  There were plenty of technical issues – pedal problems etc, but it was fun to play the set.  I find that sometimes the most problematic gigs can be the ones that the audience really enjoy and remember as great shows – I guess it might be something to with the energy and the seat-of-the-pants vibe of the show.

After the show we celebrated Simon’s first gig with a beer and then went to the signing table.  It’s always great to meet audience members after the gig and the signing table gives us that opportunity every night.  After we’d finished at the signing table we went back to the stage to pack away our pedal boards.  When I got to my pedal board’s flight case I spotted a sticker that had been stuck there by Harry, our tour manager, on our 2006 US tour – coincidently, the sticker says ‘I played the Hamilton Place 2006’ – the exact same venue we’d played tonight. 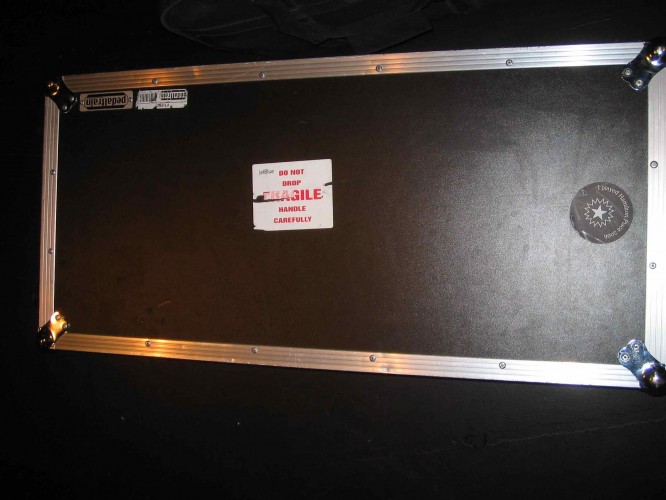 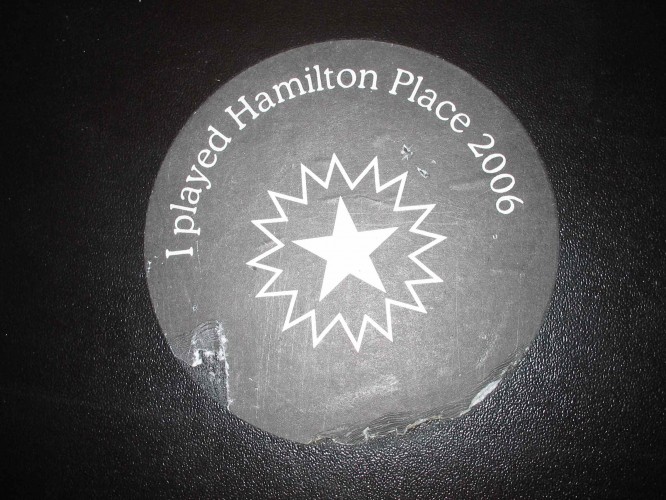 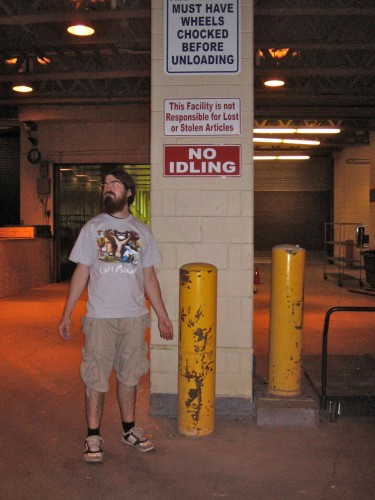 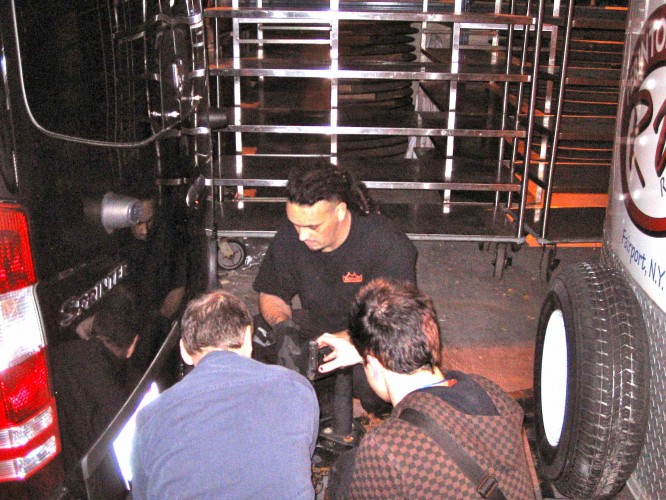 When the crew had finished loading we headed to our hotel for the night and checked in.  Exhausted, it didn’t take me long to get to sleep.