Despite having set my alarm for 11, I woke up at 6.45am – my body still stubbornly set to UK time (11.45am).  When I realised I wasn’t going to get any more sleep I headed down to the hotel’s breakfast bar and had some fruit and decaf coffee – an unexpected treat as I wasn’t expecting to be up for breakfast after the previous day’s epic journey.

After breakfast I went back up to my room, sat down and did some practice – I’d not played much guitar for the previous couple of months and my fingers were feeling a little rusty.  Whenever I need to build up the strength in my fingers I usually put on a movie or documentary and run various technical exercises while watching it.  This morning I watched 2 documentaries.  One was about the similarities between Hitler’s Nazi party and the Soviet communist party – very interesting.  The second program was about a family who were held up in their mountain cabin by the FBI and military – the police shot their 13 year old son and an FBI sniper shot the mother while she was holding her baby – pretty shocking stuff.

At 12 noon I went down to the lobby to meet Carl, Simon, Simone and Harry for an afternoon of tour preparation.  When we got into the van, Harry gave me a pedal that I’d ordered online and had shipped to Bruce Pilato’s house.  The pedal in question was a Tech 21 Midi Mouse – it’s basically a midi controller pedal which allows you to change midi channels in a very simple fashion (so simple I’ve not even looked at the instruction manual yet).  Readers of my tour blogs may remember that my Whammy pedal had previously suffered at the hands of a Russian baggage handler and as a result lost it’s control knob.  Ever since, whenever I’ve wanted to change patches on the pedal, I’ve had to dig my thumb nail into the broken piece of plastic and do my best to twist the knob – a method that sometimes works, but it tends to be a fiddly approach to say the least (especially if I’ve got to change patch several times in one song, as I do in Pictures at an Exhibition).  Anyway, I’m pleased to say that those days are over as now – with my new Tech 21 pedal I can easily change patches on the Whammy pedal with the click of a foot switch – life is good!

After a short drive we arrived at a big guitar shop in Rochester called House of Guitars (affectionately known as the HOG) to pick up a couple of pedals that I’d ordered for the tour.  The pedals in question are called ABY pedals.  An ABY pedal is a simple device for splitting the signal from your guitar to two amplifiers; for this tour I plan on running two amps in stereo for one huge guitar sound.  The second ABY pedal is for switching the amps; I wanted to be able to use one foot switch to change the channel of both amps simultaneously – I hoped that another ABY pedal would do the job (using the ABY to connect the foot switch to both amps).  The HOG did the pedals at a good price (Bruce Pilato, the band’s manager, has contacts everywhere!) and, after a few nasty surprises on the previous US tour, I was prepared for the extra tax that was added at the till.  For us Brits, this is a totally foreign concept – the price on the price tag is ALWAYS the price you pay at the cash desk.

Pedals in hand, we headed to Bruce Pilato’s storage unit where the band’s merchandise was being stored together with all of Carls drums (and, as I later spotted, much of Asia’s gear too). 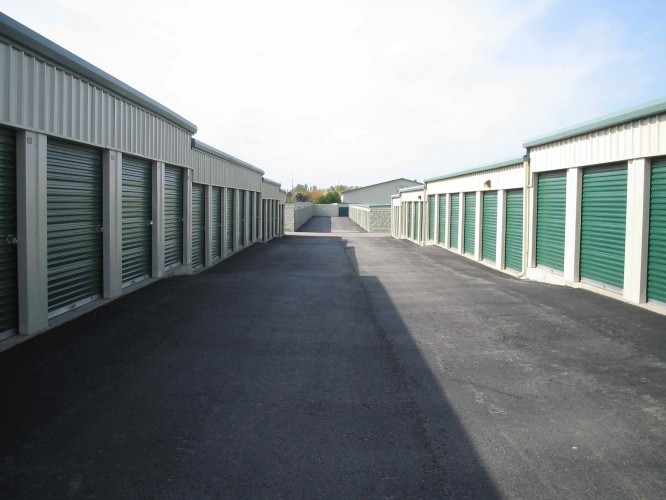 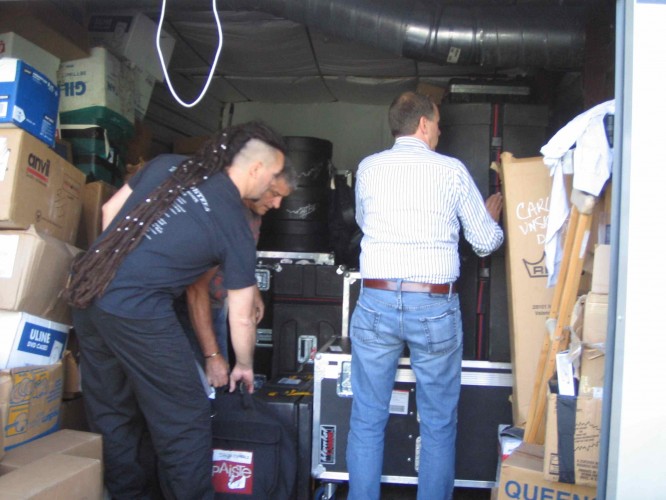 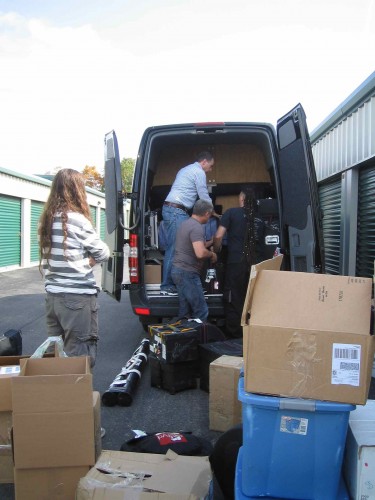 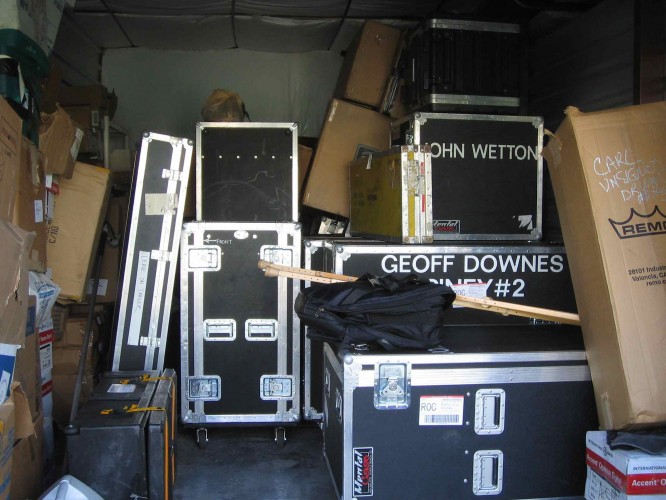 Once the drums and merch were in the van we headed to the hire company to try a few amps and have a quick run through a couple of tunes.  The hire company in question is called Audio Images and is run by a guy called Seb.  Besides running a very successful hire company Seb, I was told, is also a great guitarist and former member of plenty of cool bands, including Overkill and Anvil.

As we pulled up outside Audio Images, we were met by a guy called Josh.  Josh is to be our merchandise guy – if you you come to one of our shows, please be sure to say hello to Josh on the merch desk :o)  As well as helping set up the stage and loading in and out of each venue, Josh’s other main role is that of projectionist.  For this tour we’re playing several videos that the multi-talented Bruce Pilato made to fit with specific songs – Josh is in control of the videos in our live show.

I was given a choice of three different Marshall heads and a Mesa Boogie head, so I asked to try them all.  I needed an amp that was foot-swictable, so that ruled out one of the Marshalls.  Left with two Marshalls – a JCM 900 and a JCM 2000, as well as the Mesa Boogie Dual rectifier, I soon settled on the JCM 2000 as being the most suitable and flexible for this tour (with the added bonus of being able to hire three of them – two to run in stereo and one to use as a spare). 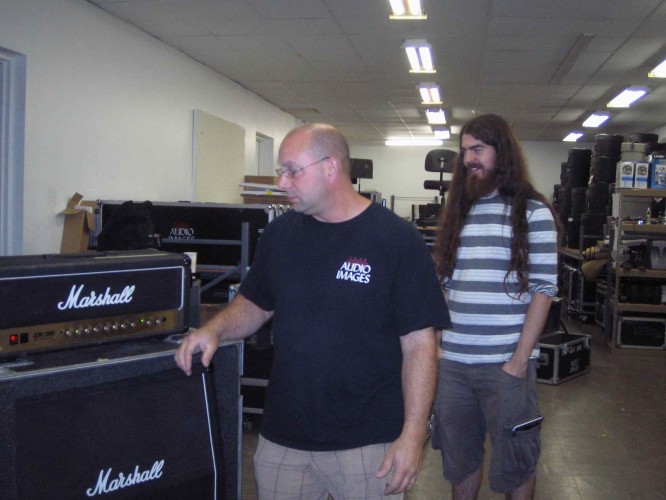 I like to have a touch of reverb on my clean sound but I like to keep my distorted sound totally dry (no reverb), so the JCM 2000 amps were perfect for that as they allow you to set the reverb level on both channels independently.  Well, that’s the idea anyway – the first amp I tried had no reverb, it seemed to be broken.  I asked to try another and, sure enough, that was exactly the same… surely this must be something I’m doing wrong.  So I tried another – it worked!  Seb had four JCM 2000 in total and when we tested the fourth one we found that the reverb didn’t work on that either.  Puzzled, Seb called Marshall to ask them if they could shed any light on the issue and they told him that it was a common problem with that amp!  It certainly is a common problem – 3 out of 4 of Seb’s amps had it!  The guy at Marshall said what needed to be fixed and so Seb sent the three amps to a local amp repair guy and within a couple of hours two of them had been fix and returned.  While we were waiting for the amps to be returned I hooked the working JCM 2000 with the JCM 900 and we played through a couple of tunes.  The sound from the amps was immense – the JCM 900 was set to more of a crunch sound while the JCM 2000 was set to out and out distortion.  This had the effect of combining the clarity of the crunch sound with the power of the distorted sound; it sounded massive but at the same time crisp and clear – the perfect combination.

When the repaired amps returned we tested them – they worked fine and so Seb went to put them in their flight cases.  As Seb was carrying one of the amp heads to the flight case I saw a bit of black plastic drop off and bounce under one of Carl’s cymbal cases.  I thought it was nothing, but decided that it was worth a look – on closer inspection I found that the piece of plastic was actually one of the effect loop jack sockets from the back of the amp… we weren’t having much luck with these Marshalls!  Seb called the amp repair guy again and arrange to drop the amp off to us before we left the following morning. 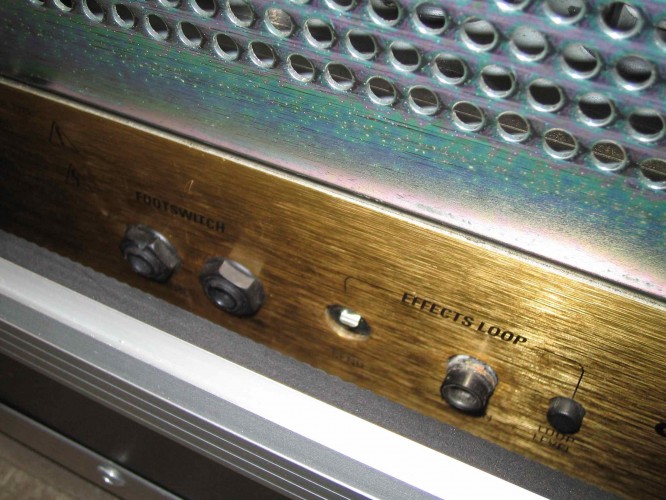 Once Josh, Simone and Harry had packed all our gear into the van and trailer we went back to our hotel for an hour before heading to Bruce Pilato’s house for a pre-tour dinner. 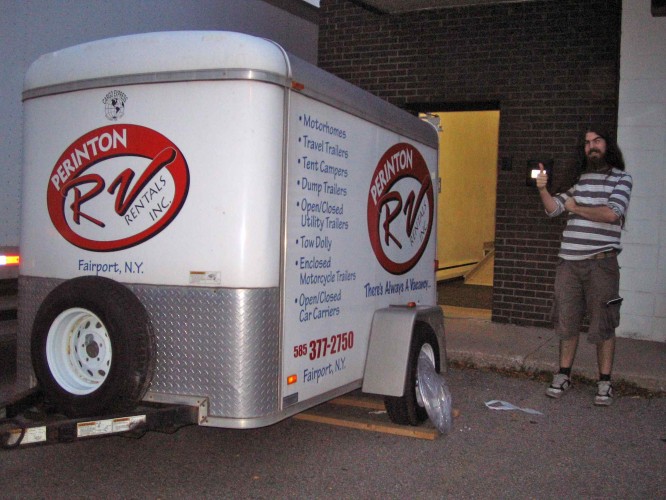 Bruce Pilato, as well as being Carl’s manager, is a well respected music journalist with contacts all over the music industry.  Throughout his many years in the industry he’s met, interviewed and become friends with some of the biggest names in the business.  As a result of his long career he’s built up a huge archive.  In his collection he has autographs from some of the biggest names in music – The Beatles, Jimi Hendrix, Frank Zappa… the list goes on and on.  We spent a little time looking round Bruce’s private museum before going for a lovely meal prepared by his wife. 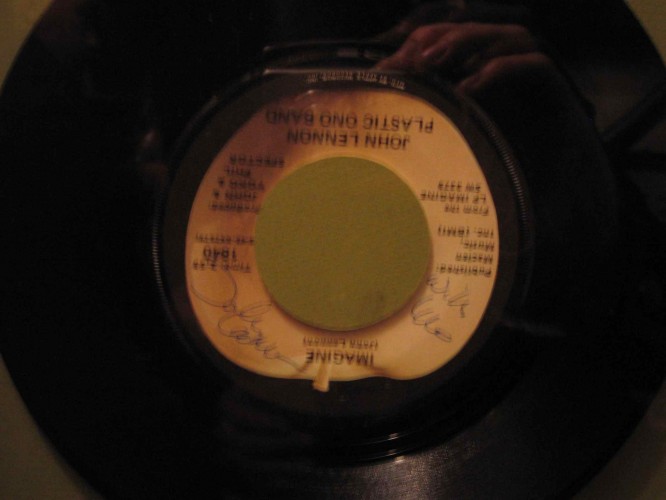 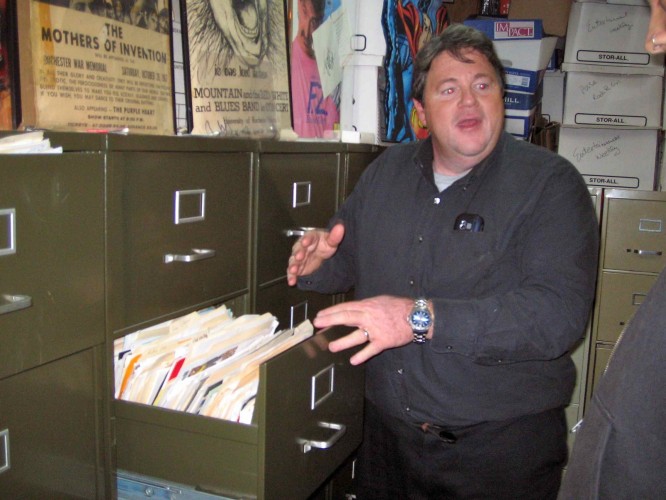 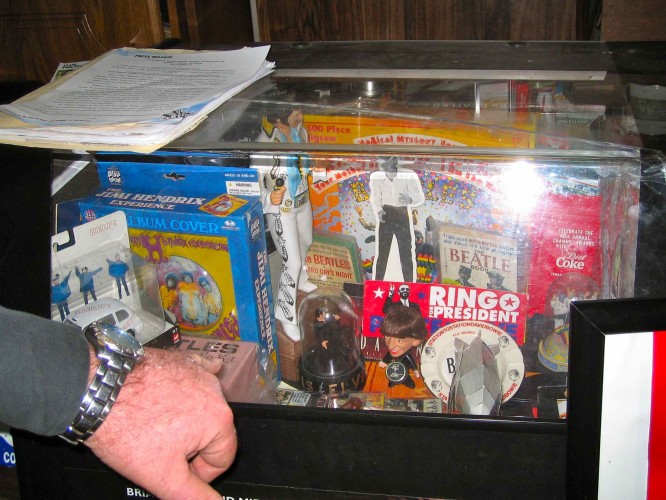 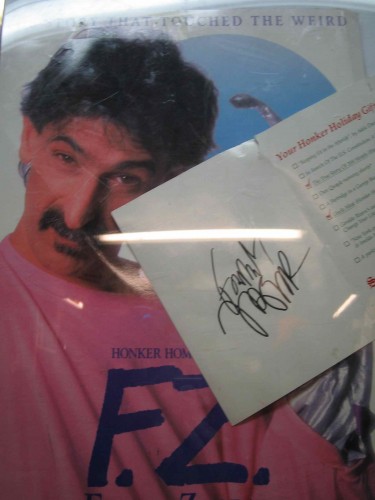 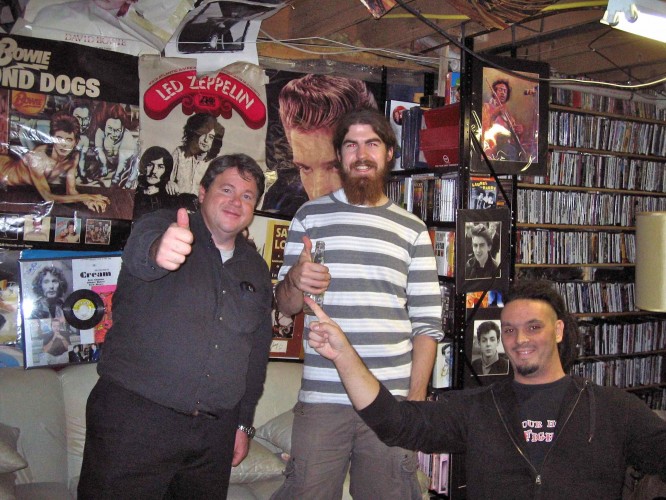