I was awoken by the sound of a pack of huge barking dogs. The hotel owner had said that he kept Irish Wolf hounds and I presumed that these must be what had woken me. I open the curtains onto my balcony and was met with two surprises: firstly, the size of the huge dogs running round the field below – they dwarfed the hotel owner (who was by no means a small man) as he walked with them. 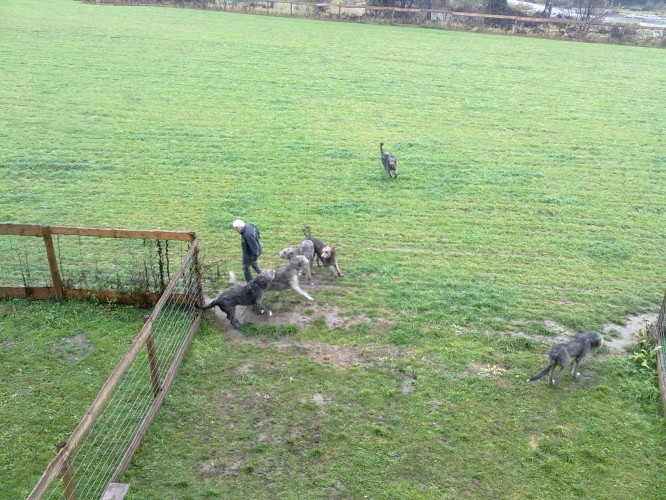 The second surprise I had was the breath-taking view of the mountains which, until then, I had no idea existed, as we’d arrived in the dark. 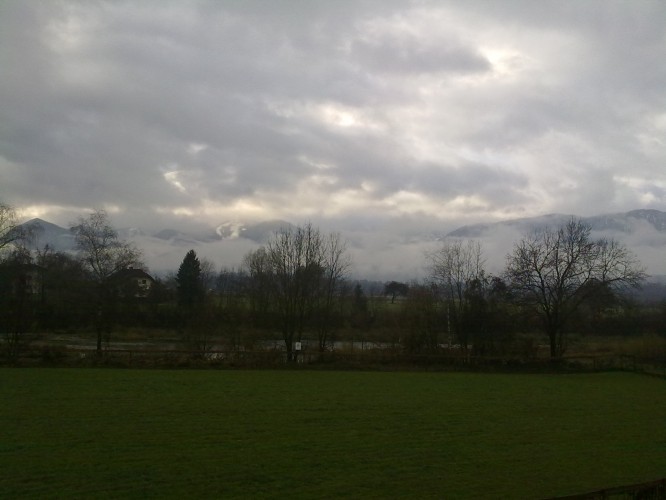 After a breakfast of what looked like the leftover meat and cheese from last night, I had time for one hour’s practise before it was time to set off for our next hotel, also in Austria but a little closer to the venue of that night’s gig.

In the parking area of our hotel we met Simone – our regular Italian soundman, who would be doing sound for us at that evening’s gig. After greetings were exchanged and we’d had chance to catch up a little, we set off in convoy (Simone followed us in his car).

The hotel was only half an hour’s drive away and we arrived at 12.30. After some confusion as to the whereabouts of the hotel, we stopped for Simone to ask directions. After being ignored by some not-so-friendly locals who probably didn’t like the look of his dreadlocks, Simone asked a waitress at the café of the huge impressive looking building that we’d parked next to – she explained that this building was our hotel! 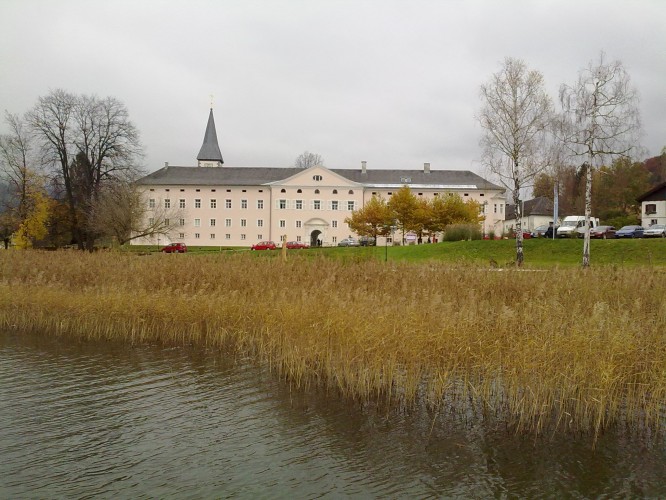 We arranged to meet at 3pm, giving us just over 2 hours to chill in our rooms. The inside of the hotel appeared to be a converted palace; there was a huge courtyard and long stately corridors which, every so often, opened out into large frescoed rooms. 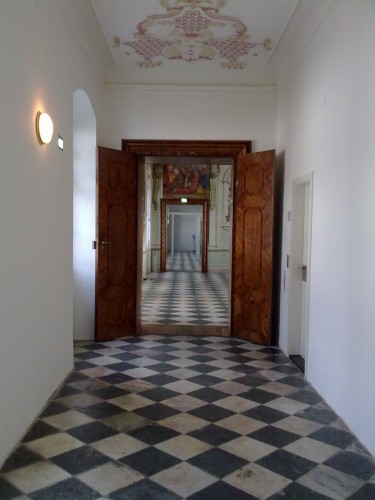 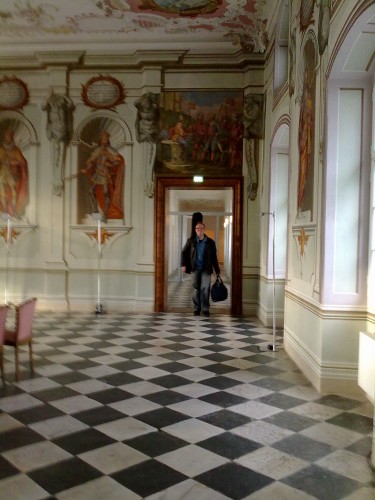 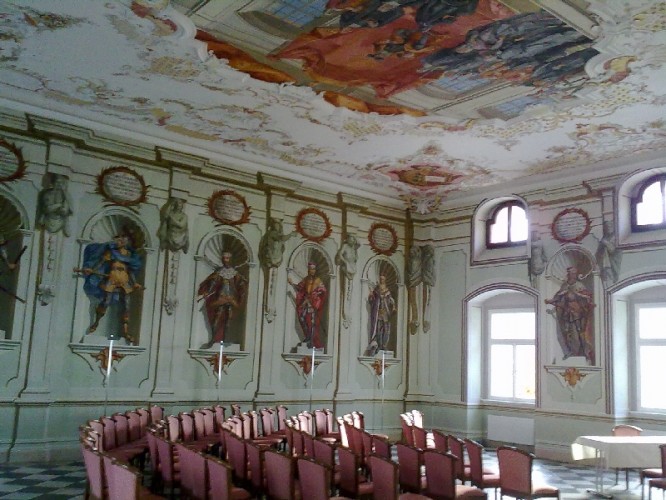 After a brief look around the hotel I went to my room, where I ran the set, chatted to my wife and then we headed to the gig venue.

It took us quite some time to find the venue – weaving through country lanes, small town streets and over railway lines, much to the interest of the inquisitive locals. When we finally found the venue we were met with a bizarre building, the likes of which I have never seen before. I think it’s fair to say that the venue was much more like a piece of sculpture than anything else. It resembled a crazy rock or crystal formation, with angles and blocks sticking out at all sorts of unfeasible angles in a manner that made no logical sense to me. It was wonderful! 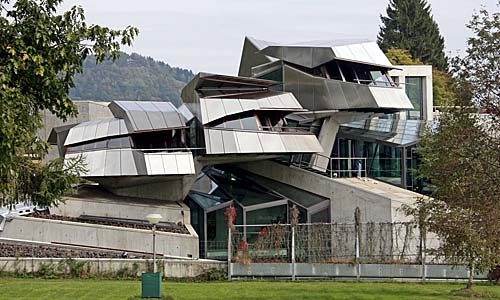 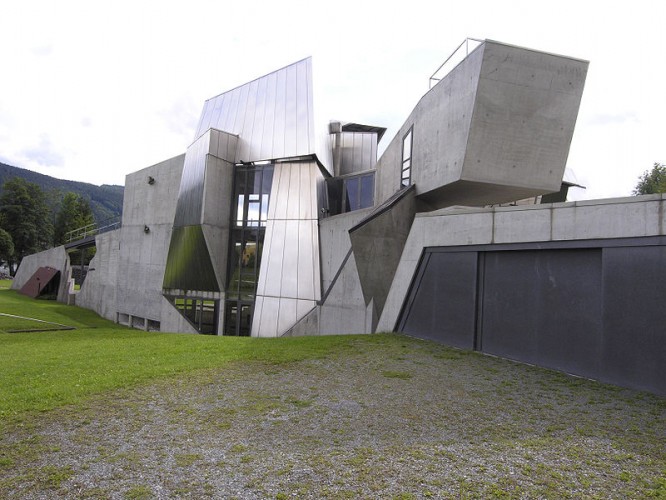 We were greeted by the promoter, who led us through a rabbit warren of corridors and stairs to our dressing room and brought us food and drink. 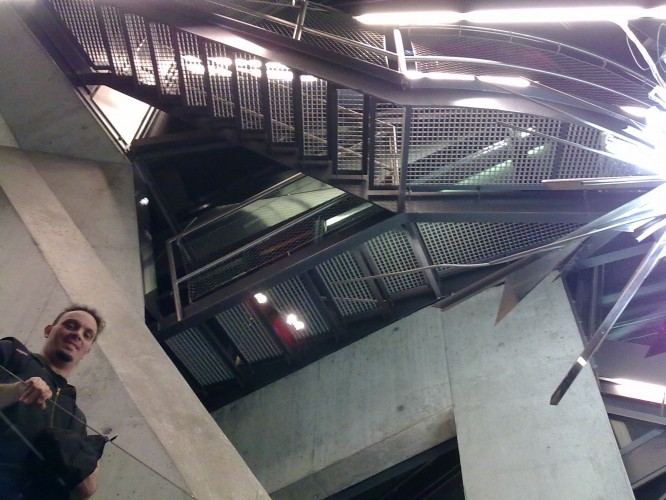 I asked the promotor about the building and he explained that it had been designed as a house but was now used for events and concerts as well as an office for his company. I couldn’t resist going for an explore so, camera in hand, I set off on a mini-adventure around the house. I found a bathroom with a bath that looked more like a coffin, numerous glass floors, a giant water feature in the basement and a maze of passages and staircases that resembled an Escher optical illusion. 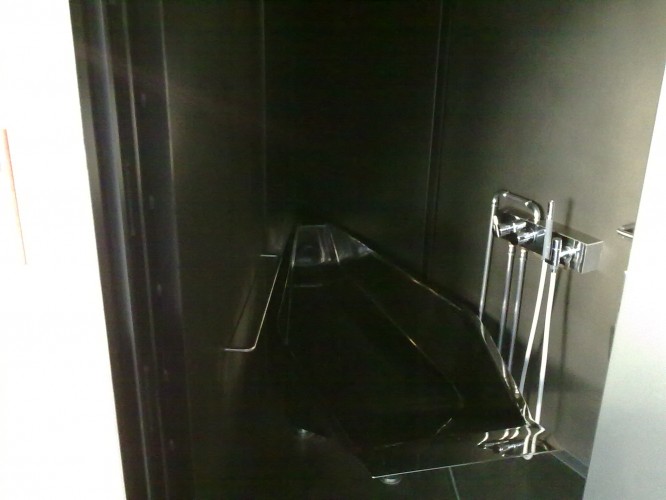 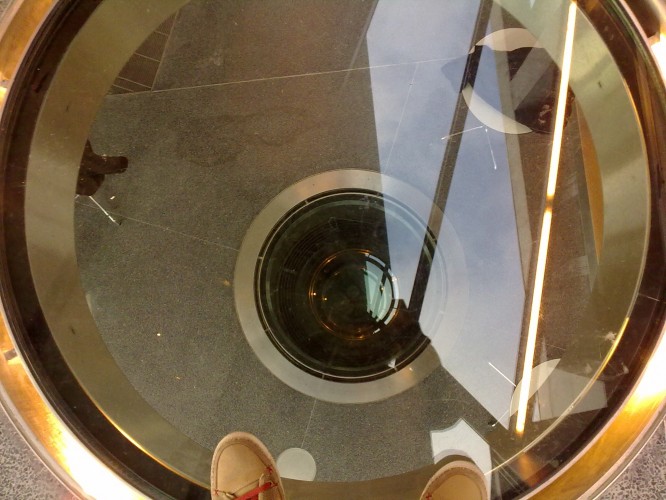 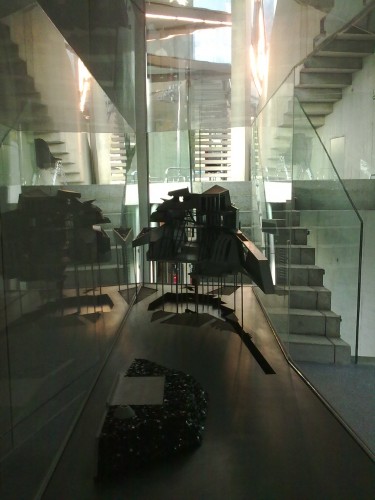 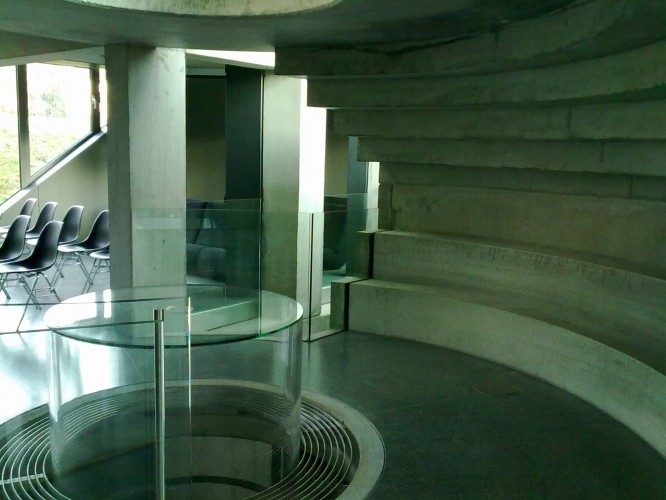 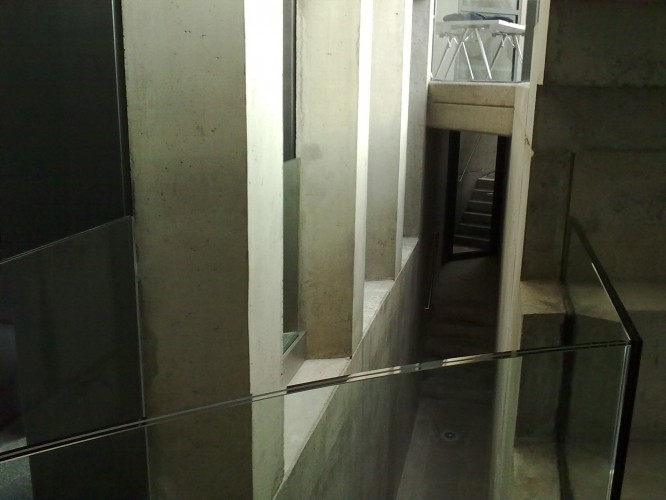 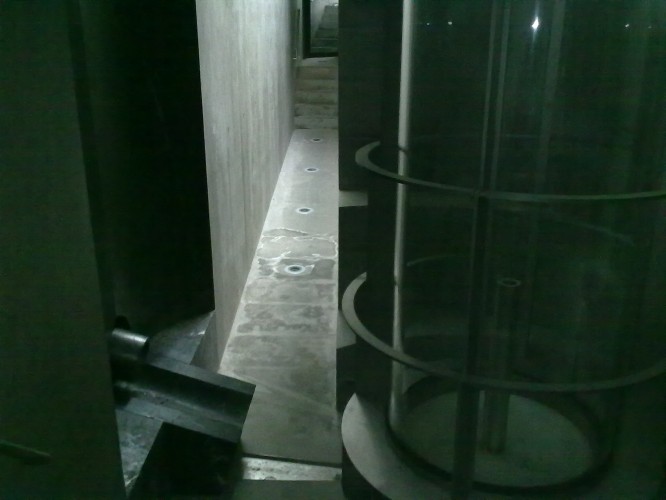 When Carl started to bang a few drums we got a taste of the acoustics of the house. The entire place was built from Glass and cement – a recipe for acoustic disaster! Carl’s drums echoed wildly around the whole building, which sounded great on their own, but it was clear that when a whole band was playing (or even a whole drum kit) the sound was going to turn into an indistinguishable mush! 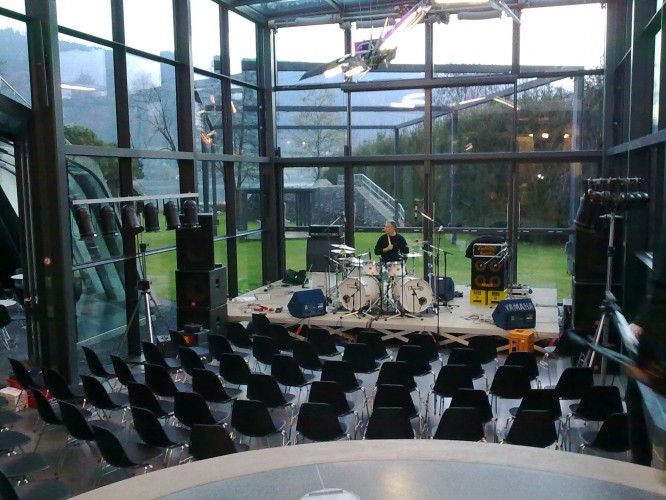 We sound checked as best we could, made notes of any changes Carl wanted to make to the arrangement of songs and then returned to our dressing room where we waited for the audience to arrive.

When show time came I was pleasantly surprised to find that the sound on stage had got a lot better for me – I could now just about hear my guitar (which is always a good thing!). I didn’t have anything else in my monitor other than my guitar – Carl was so loud I don’t think he needed a P.A. and Stuart’s low end was swimming around the room like a great mushy whale (if such a thing exists).

The gig went well and the audience seemed to enjoy the show. One incident in particular sticks out from the gig; after the introduction to Trilogy we all stop and, after a short pause, I play a quiet clean chord vamp to bring in the rest of the band. Just before I started to play the vamp a guy in the front row’s mobile phone started to ring. I stood looking at him, silently and still, waiting for him to turn the phone off before I continued to play… the audience thought it was hilarious, but I did feel a little sorry for the guy – he’ll probably remember that for years to come!

After the gig I had chance to meet some of the audience before the promoter took us to a local restaurant. The choice of food was either fish or steak – I opted for fish and when it arrived it turned out to be a whole fish stuffed with rosemary – very tasty. We also had calamari and prawns; all the fish was freshly caught that morning and had presumably come from the lake by our hotel. 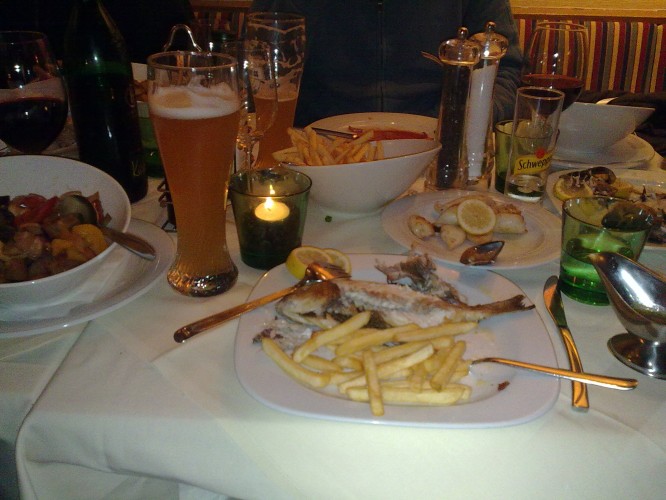 Stuart ordered his steak ‘well done’; it arrived oozing blood… I was glad I’d gone for the fish! 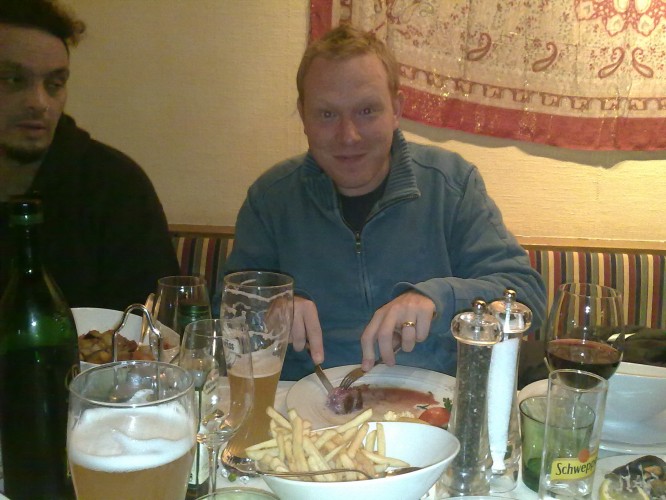 After the meal we said goodbye to the promoter and went back to the hotel. After I’d been in my room for a few minutes I heard the most beautiful singing, echoing down the corridor; a small group of people who had been sitting around a table drinking wine in one of the hotel’s fresco-ed rooms where singing. I opened my room door and listened for as long as they sang. I took the opportunity to record them on my phone – the effect of the music echoing down the corridor was hauntingly beautiful.