My alarm went off at 8.15am – giving me and Ruben enough time to have showers and get down to breakfast for 9; the time of our scheduled production meeting.  At 9.45 we called Henk and Wilco’s room and, apparently (I didn’t make the call), a very dazed Wilco answered the phone and said they’d be down soon.  So, at 10am, Henk and Wilco arrived to numerous (friendly) jeers and we had our production meeting.  After the meeting we went back to our rooms where I ran the set one last time before we had to meet in the lobby to leave the hotel at 11.30.

The journey to the venue, the Olympic park in Munich, took about half an hour.  We arrived in torrential rain to find Mike Portnoy waiting, as he and Neal had scheduled some time to record Mike’s vocal parts for the new Transatlantic album.  Our dressing room was the first room in a long line of large metal porta-cabin-type constructions.  The next door along from our dressing room was marked ‘Transatlantic Vocal Booth’ (which later acquired a ‘Do Not Disturb’ sign when recording started).  Then there was James La Brie’s dressing room (Dream Theater’s lead vocalist) and finally there was Dream Theater’s dressing room with numerous wardrobe cases parked outside.  Whilst standing outside our dressing room, Jordan Rudess (Dream Theater’s keyboard player) came to say hello to me, he shook my hand with a friendly, firm grip – the sort of greeting that makes you feel genuinely welcomed… what a lovely guy. 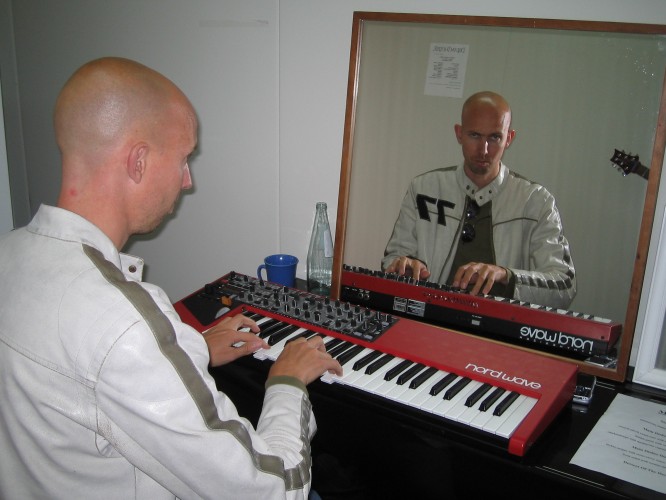 A little later I heard Dream Theater start their sound check, so I left the dressing room and headed to the front of house area to watch them.  They ran ‘A Nightmare to Remember’; a tune from their new album ‘Black Clouds and Silver Linings’.  They sounded amazing – so tight, so on-it… but when they’d finished they all started laughing, saying things like, “I think we’ll have to work on that for a while before we play it live… that was rough…”  After they’d played the song, Mike proclaimed to the rest of the band, “Happy Smell The Glove, everyone”… Spinal Tap speak for “Our new album is released today”!

After their sound check, a huge black curtain was hung in front of Dream Theater’s equipment and it was time for us to set up… unfortunately we now only had 45 minutes to set up and get sound checked (these things rarely run to schedule).  So, with our 4 local crew helpers, we set about frantically getting everything on stage… first Collin’s drums went on, which we soon realised may have been a mistake as our section of the stage was really narrow; we had to squeeze everything that belonged at the left of the stage (mine and Jessica’s gear) past Collin’s huge drum kit (which was being set up in the centre of the stage).

After I’d set up my amp and pedals (with the help of Mattias, our ace roadie/guitar tech/photographer) I ran backstage to our dressing room to get my guitar (a guitar left on a busy stage is a bad idea – I try to take my guitar to the stage as late as possible).  On the way back from the dressing room I walked past Dream Theater – they were having lunch, all sat around a table.  Mike was sat next to John Petrucci and when he saw me, he introduced me by saying, “Hey John, you gotta check this guy out, he does this amazing tapping stuff.”  I couldn’t believe what I was hearing… 2 of my heroes talking about me like that.  I responded by telling Mike to stop building me up and John said, “Ah, you’ve been spotted now”… oh, the pressure!

We finally got set up with about 10 minutes to spare.  In that 10 minutes every member of the band was concentrating on getting a sound and sorting out monitors… then we ran a section of one of our tunes.  Unfortunately, I didn’t have time to spend on getting a good guitar sound (I always take a minute to adjust the EQ settings on the amp to match my guitar and amp to the sound of the venue (for reasons to do with air pressure, the same guitar and amp with the same EQ settings can sound totally different in a different room or space, so you need to ‘tune’ the amp to every new venue you play in by EQ-ing it).  With everybody on stage making so much noise, frantically getting ready in the short amount of time we had, I didn’t have time for this ‘tuning’ of the amp.  We were told that the venue wanted to open the doors to the public, so we settled for the sound we had and went backstage to our dressing room.

I had just enough time to change the strings on my guitar, then we got together for some prayer before we hit the stage.  The time of prayer was really special – I could really feel what felt like the presence of God in the room and I hoped that this feeling would continue onto the stage with us.

We hit the stage at 6.50.  As we walked on stage, the energy was intense – a crowd of over 5000 people welcomed us with an almighty ROAR… wow!  The gig went well, I made a few minor mistakes with all the adrenalin and excitement of the experience, but nobody seemed to notice (or mind).  The audience were amazing – every time I played a flashy lick or solo they cheered enthusiastically (I figured Dream Theater audiences would like flashy playing!!!). 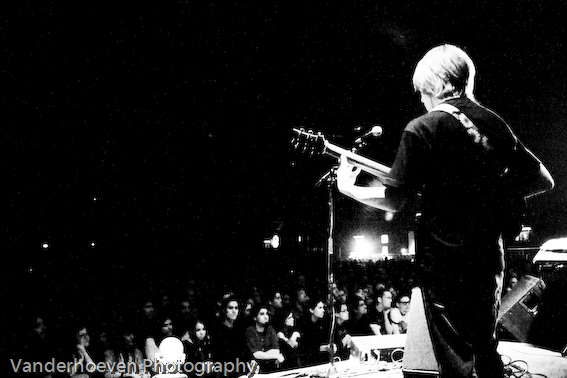 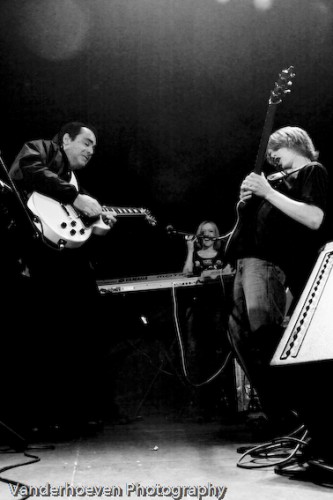 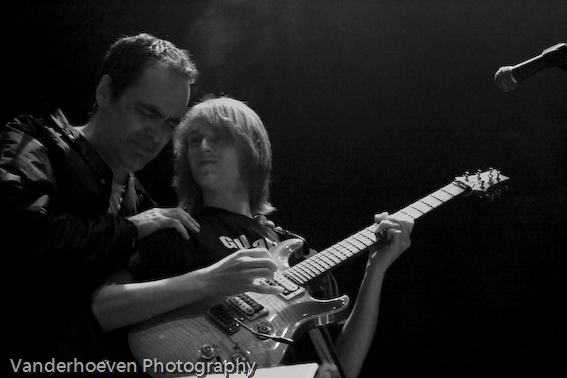 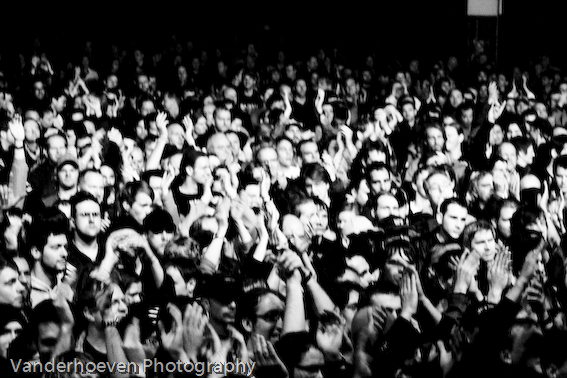 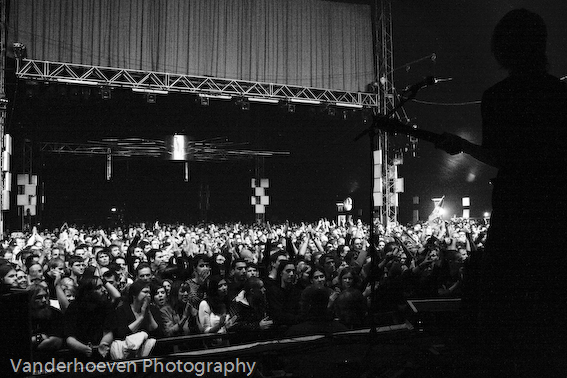 After the gig we packed our gear away backstage and left it ready to be loaded in the van (since we nearly left a couple of items of gear in Sweden, we’d put in place a fool-proof labeling system, to ensure that none of our gear was left again).  Once we’d packed I grabbed a coke and went to watch Dream Theater from the back of the stage.  Whilst I was standing there, the in-house monitor engineer came to me and told me that Jessica had left her in-ear headphones at the monitor desk.  I went over to the monitor desk… unfortunately I didn’t find an in-ear system, but I did find an amazing view, right next to John Petrucci.  So, happily, I watched the rest of Dream Theater’s concert from the monitor desk – the best seat in the house.  :o) 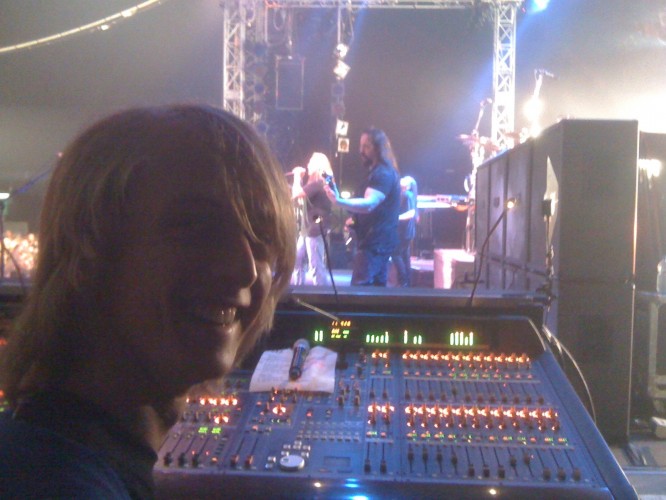 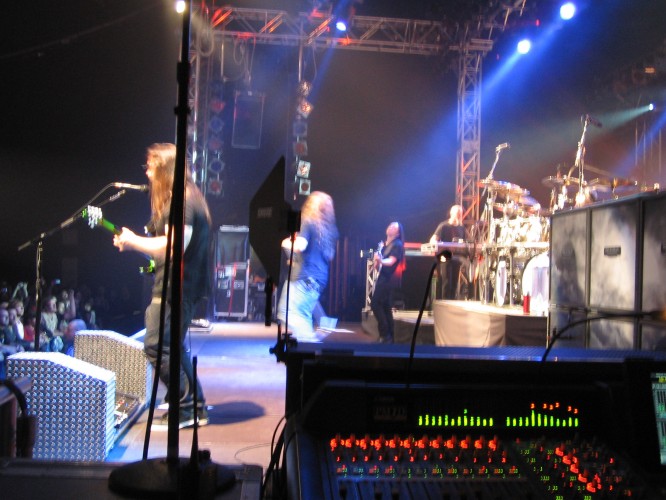 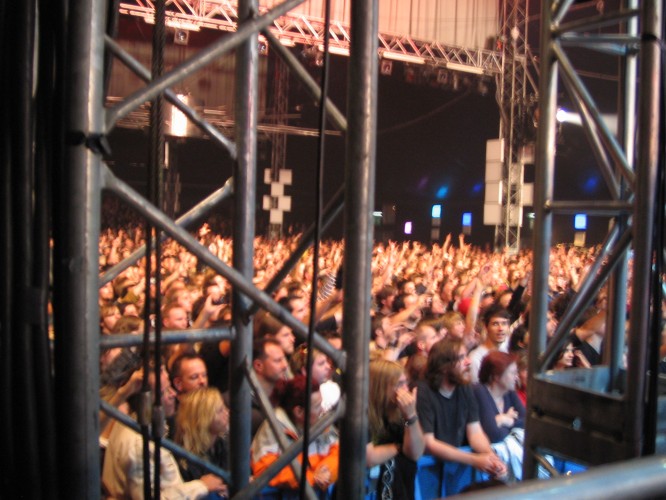 After the show we packed away all our stuff from our dressing room and got ready to leave for our long drive.  As I was leaving I saw John Petrucci outside the Dream Theater dressing room.  I said hi to him and complimented him on their show and we talked a little before someone shouted that we were leaving.

We got in the van and drove to our next hotel, which was somewhere between Munich and our next gig.  We eventually arrived at the hotel at 3.30 am.  I hadn’t slept at all during the journey – I was still high on adrenalin from the gig.

The following morning another production meeting was planned for 10am… I suggested to Ruben that we set our alarms for 9.55!