My alarm awoke me at 7am. Unfortunately, I’d not got the night’s sleep I’d planned; Berry got back at 11.30, had a shower, sent a few text messages and then his phone woke us both up with a text message in what seemed like the middle of the night… ah well!

I had a shower, got dressed (putting my new ‘Guitarist’ t-shirt on) and went down to breakfast at 7.30. When I got down to the breakfast most of our party were there, including a few people I hadn’t met before; Bill Evans – Neal’s manager, and 2 girls he’d brought along to experience life at a rock festival!

We set off for the festival at 8 and got there about half an hour later. When we reached the festival we drove through what looked like tight security, being stopped several times to check passes and permits. Eventually we pulled up at the side of the ‘Rock Stage’. Everybody got out of the car except me; I decided to change my guitar strings there and then, before getting out. As it happened, Motorhead were still sound checking – they were running 30 minutes late; just enough time to re-string, find the dressing rooms and unpack my gear. When Motorhead had finished, I took my gear on stage, set up and then we sound checked with a few short sections of songs. Whilst we were setting up Pete Trewavas from Marillion (and Transatlantic) came on stage and said hi to us all. Marillion were following us on the Rock Stage, so the plan was for Pete to get up with us for the Transatlantic song ‘We All Need Some Light’. When we finished sound checking we went back stage where we found our other guest, who was also due to perform ‘We All Need Some Light’; Dream Theater’s Mike Portnoy. We said hi and he told me that he really liked my playing on Neal’s Sola Scriptura DVD – wow, what an amazing compliment. It was great chatting to Mike; one of my musical heroes, my favourite drummer and a big influence.

In the dressing room I tuned then we prayed a little before Collin announced that it was time to hit the stage. On the way to the stage, Pete stopped me to asked if we were playing in standard tuning – good thing he asked; we tune all our instruments a semi-tone lower when playing with Neal, and Pete was due to be using his own bass (which he had tuned to standard tuning) on We All Need Some Light!

It was great to play in front of an audience with Neal again. The first couple of songs went well and then we started ‘We All Need Some Light’. Pete came up on stage to huge applause and plugged his bass into Wilco’s amp. We started the song with no drummer and then, after the first verse and chorus, Mike walked on stage to thunderous applause and we did the rest of the song with him. What an experience to play with Pete and Mike – a real dream come true, I had to keep looking around the stage in order to fully appreciate what was happening… I was taking Roine’s place, playing with 3 quarters of Transatlantic… wow! For the entire gig I could see Pete and Mike sitting at the side of the stage, Mike was air-drumming along with all of Collin’s drum parts (which were, of course, actually Mike’s own drum parts being played by Collin). Then, a few songs later, we played the Transatlantic epic ‘Stranger In Your Soul’. For those not familiar with the song, there’s a section in it called ‘Hanging In The Balance’ (which, incidentally, was Neal’s original title for the whole song when he first wrote and recorded his demo of it). This section contains a heavy, drop-D guitar riff, which accompanies 4 lead vocalists, each taking consecutive lines of the song in quick succession; I take the first line of each group of 4. When we started the riff for the section, I saw Mike run up on stage – he was going to sing his part. However, I couldn’t remember which part was his on the original recording… I thought and thought, singing the song over and over in my head whilst playing the riff, trying to remember which part Mike had sung, but I had no idea. A couple of seconds before I was due to sing my first line, I decided that it would be best for me to just sing my part loud and proud; that way the worst thing that could happen was that both me and Mike sing the same line at the same time. So, quick thinking as I was, I launch into my part… only to find, a couple of words in, that I’d come in 3 beats too early…. arrrgggghhhh!!! I managed to recover and sing the part in the correct place, but I spent the day feeling like a plonker in front of one of my musical heroes. Ah well, these things happen… I resolved to stay more focused in future, and TRIED to put it behind me!

Later in the same song, there’s a part where Neal takes over on the drums and plays a solo. At this point, both Mike and Pete also came up and joined Neal on the drums – a lot of fun!

Apart from my huge blooper, I really enjoyed the gig – it was worth all the hard work that you’ve read about in the previous entries of this diary as well as the weeks of personal preparation before arriving in Holland.

After the gig, I laughed off my mistake with Mike and he said that he really liked my playing – that made my day!

After our show, we watched Marillion from the side of the stage – they put on really a great show. 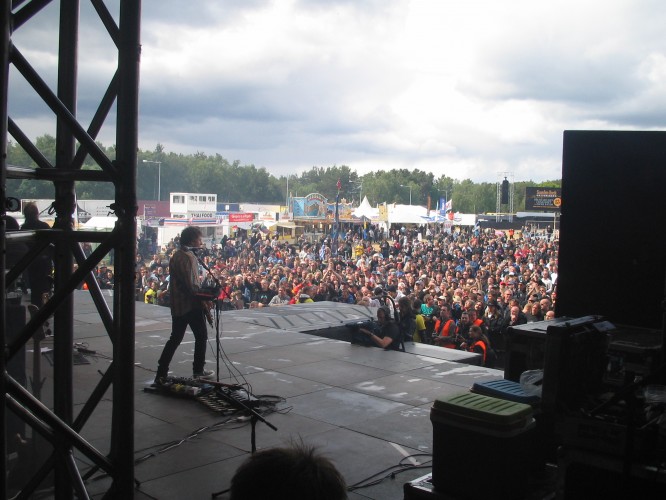 After their show I chatted with Pete and Mike for a while – what lovely guys, so humble and interested in what people had to say.

We said goodbye to Henk, Wilco and Alco who left to drive back to Holland then I went out into the main festival area, to say hi to some of the audience who were waiting. We had lunch (which included reindeer!) in the artists’ restaurant and then went to see a few more bands, we were now officially on holiday!

The festival, like most festivals, had numerous stages with different bands playing at different times in the day. However, nothing prepared me for the ‘Guitarhero’ stage in one of the tents… a stage set-up for people (mostly kids) to play the video game Guitarhero with Nintendo ‘guitars’ and a drum kit.

We finished the day watching Motorhead – the guitarist had an awesome sound, I think he was using 2 Marshall heads in stereo… it sounded MASSIVE. They also had cool pyrotechnics too! 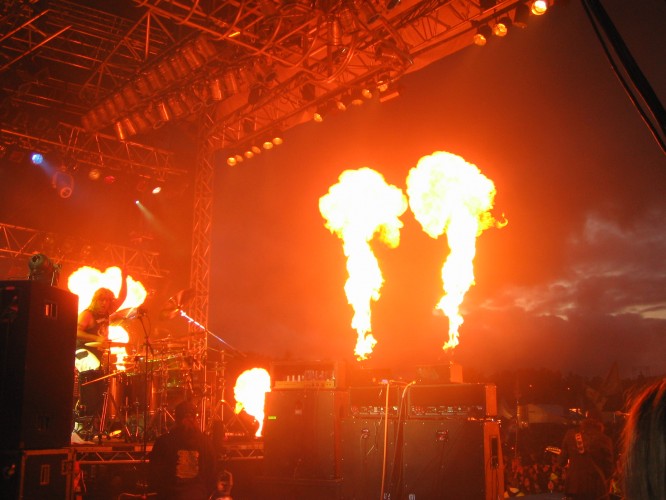 Part way through Motorhead, a few people in our party were getting cold, so we headed back to the hotel. We were staying in a different hotel that night – 30 minutes drive from the festival… when we arrived we found it was a spa complex. Due to the fact that 3 guys had left for The Netherlands, we all had separate rooms, which was really nice! After dumping our bags in our rooms, we went to have a beer in the bar; as exhausted as I was, I just wasn’t ready to go to bed after such an action-packed day.