After a good night’s sleep, I awoke to face a day of travel.

Our party met in the hotel lobby at 12 (we had to vacate our rooms at 11.30, so we ‘unofficially’ lingered in the lobby until Stefano came to pick us up at the agreed time). From there we made our way to the airport, slowly, seeing as it was only 20 minutes away and we could not check in until 2.30. After the all-important ‘Autogrill’ stop, we arrived at the airport where we sat for an hour, people watching, until Simone arrived and we could check-in. In a Rome airport (or indeed, anywhere in Rome) I’m always surprised to see just how many nuns and priests are walking around, going about their everyday business in their ceremonial clothes / robes. If you ever fly to Rome, you will doubtlessly see nuns or priests in the queues around you; queuing for passport control, customs, baggage reclaim and check-in. I don’t know why that strikes me as strange, or even why I deem worthy of writing about, but it just seems funny that Rome seems to be the one place where the church is visible everywhere in society. That, to me, is a very good thing; I think the church needs to blur the boundaries between the world and itself more. Anyway, several nuns later, Simone arrived and we checked our luggage all the way through to our final destination of Gran Canaria, in the Canary Islands (via a connecting flight to Madrid), without any excess baggage charges.

On arriving in Madrid, we had a few hours to kill and so I sat in a juice bar and wrote this blog until the gate for our plane was finally announced. Madrid airport is one HUGE corridor, stretching for what must be a mile. When the gate was announced, I walked in a straight line for about 15 minutes, down the terminal (or afore mentioned corridor!) until I reached our gate; I hadn’t started my walk at the end of the terminal and our gate was just past the middle point!

We boarded our connecting flight for Gran Canaria; I slept, read an in-flight magazine, got bored, read the in-flight magazine again and got bored again (I usually love flying, but when I haven’t got a window seat and have taken an average of more than one flight a day for past week, the interest starts to wane). I resorted to indulging in about as much people-watching as you can get away with on a plane. A little girl, sitting two seats in front of me, was threw up!… poor thing, that can’t have been nice; the air stewardess responded by pouring coca-cola on the vomit (for whatever reason). Another girl sitting in front of me had a Nintendo DS on which she was playing a number of games. The first game, I recognised; Super Mario Brothers, which looked remarkably identical to the first version of the game, which I remember spending days playing on my friend’s big grey Nintendo game console in the late 1980’s. However, the next two games she played were nothing like anything I recognised or remembered… The first was a game in which the girl, with her pink Nintendo DS, had a virtual baby. She got to choose what it looked like; she opted for dark brown skin, hair and eyes (which made sense, as it resembled herself), she then give it the name ‘Bentley’! The little girl spent the rest of the game taking care of Bentley; washing him, changing his nappy, preparing food for him… everything that a baby needs was included in this game! When she’d tired of Bentley (which, to give the girl credit, was MUCH later me), she moved to a new game, which showed her how to cook various meals and dishes. She started by preparing and cooking pancakes; the computer game taking her through each step, and soon moved on to preparing, de-scaling and cooking fish and all other manner of advanced culinary activities. I must say, peeling virtual carrots (I kid you not) and stirring virtual pots and pans didn’t really look like my idea of fun, but this little girl was really into it and, as an educational device, it looked to be doing a great job. If only I’d got that sort of information from playing Space Invaders or Golden Axe!

When we finally arrived at the airport in Gran Canaria we were relieved to find that our luggage actually had been checked all the way through from Rome. We were met by our Spanish hosts, who took us to our hotel, where we dropped our bags and left for a tapas bar next to the hotel, on the sea front. 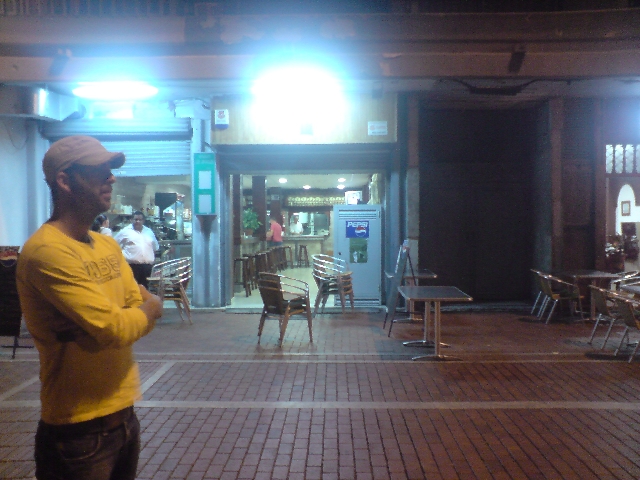 I ate a big, dead fish (boiled) followed by a crème caramel before returning to our hotel. Our hotel was, quite literally ON the beach and my room had the most amazing sea view – a good fisherman could have cast a line (at high tide!) from my bedroom window and caught his supper straight from the sea! 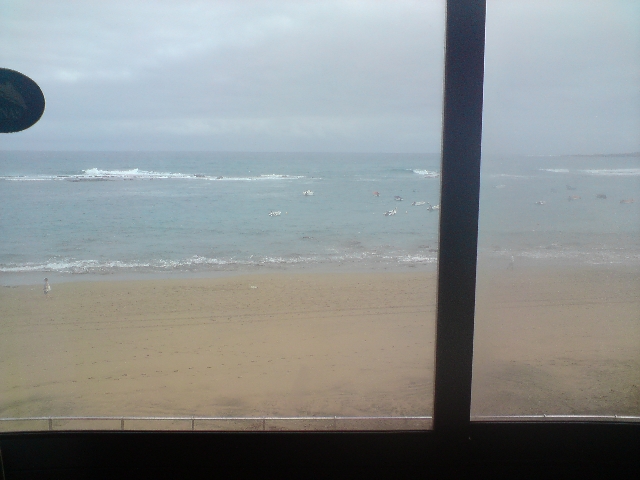