My alarm woke me at 7.30, after only 3 hours sleep – this time it was self-inflicted! I wasn’t too worried about not getting much sleep, as, for the first time on the tour, we didn’t have a gig today, or tomorrow for that matter. We met in the lobby of our hotel at 8.30 and were driven to Ufa airport where we, once again, let our Russian hosts “negotiate” the excess baggage with the lady on the check-in desk.

After saying goodbye to our Russian hosts, we boarded a plane to an enclave of Russia called Kaliningrad (an enclave, I learned before embarking on this tour, is a province within a country which is not officially part of the country; just as the Vatican City is not officially part of Italy even though it’s in the heart of Rome).
The plan was for our luggage to be checked all the way through to our final destination; Rome. This, as we discovered when we arrived at Kaliningrad airport, was not to be the case. After being instructed twice that we would not have to collect our baggage and re-check it (we were told this once at Ufa airport and once again on the plane) we were informed that, in actual fact, we would have to do just that. This third version of luggage instructions proved to be correct; for some reason none of the plane’s luggage had been checked through to connecting flights from Ufa. We waited, together with a crowd of people, for about 45 minutes for our luggage to appear on the baggage reclaim belt (the only one at the airport). We were getting a little panicky, as were other passengers; our check-in time had already passed and we still hadn’t got our luggage. So, not relishing in the thought of spending the night in Kaliningrad airport (there is only one flight to Rome per day), we tried to check-in without our luggage. This process, which Simone managed to arrange for us, involved us waving and smiling at the check-in lady from our position at the baggage belt so that she could match our faces with our passport photos. When our luggage did eventually arrive, it did so with many of the other crowd of people’s, and so we were then faced with a queue to get out of the luggage reclaim area… Russian airports have a system by which you must prove that the luggage you have collected is really yours; before you leave the baggage reclaim area, you must prove that the numbers on your luggage tags match the luggage labels on your bags. After waiting in line to prove that our luggage was, in fact, OUR luggage, we proceeded to check it in only to find that the lady at the desk wanted us to repay the excess baggage we’d already paid at Ufa airport, hours before. We tried to persuade her we’d already paid the charge, and that Ufa airport had made a mistake; if they’d have checked our luggage all the way through to Rome, we would not be asked to pay the fee twice. A sound argument, but the lady on the desk was having none of it because we didn’t have a receipt for our excess baggage payment (as our Russian hosts had paid for it) and so could not prove that it had actually been paid for. We didn’t have time for much arguing; the check-in time for the plane had past long ago, boarding had already begun and we weren’t even through security or passport control yet (which would be a lengthy procedure as we were leaving Russia). The lady escorted Simone to the excess baggage payment counter where, when he asked to pay in Euros, they asked for an amount considerably higher than the exchange rate. Simone tried to explain that this was too much but, in doing so, they thought he was saying that he didn’t have enough to pay the charge. Faced with having to delay the plane by removing our luggage (which had already been sent) the lady decided to let us off the payment; sometimes a language barrier can be a wonderful thing! 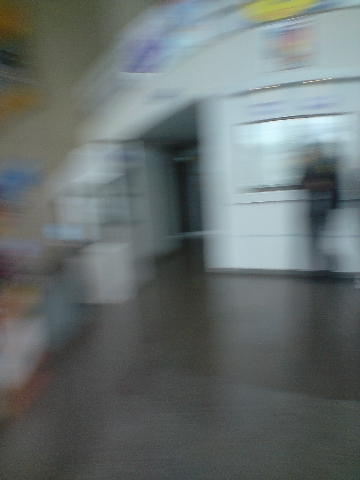 After rushing through passport control (a lengthy procedure of checking and cross-checking passport and visa numbers) we reached security. We all went through with no problem, with the exception of Simone, who was the unfortunate subject of considerable interest in Carl’s bass drum pedals; which he was carrying. As a result, he was held for around 10 minutes as he tried to explain what Carl’s strange contraptions were to a security lady who insisted that they weren’t allowed on the plane (perhaps due to a sharp edge?). Eventually, for some unknown reason, the lady decided to let Simone and the pedals through and he joined us at the back of a queue of people already boarding the plane for Rome.

We arrived at Rome airport at around 2.30 in the afternoon and were met by Stefano (our Italian agent) and Simone’s girlfriend, Veronica. Simone left with Veronica and Stefano drove us to his home town of Cupra; a beautiful seaside town where we would spend the one and a half days relaxing and recovering from the onslaught of the last 5. The intensity of the Italian mid-day sun give us a taste of the weather to come and, on reaching Stefano’s van I stripped off in the airport car park and changed into more suitable attire.

We drove for a couple of hours, breaking up the journey with a stop at an ‘Autogrill’ (Italy’s motorway service station of choice) for a coffee. When we reached Cupra we found that Stefano had booked us into a beautiful hotel, literally on the beach, and had ensured that all our rooms had wonderful sea views. After a quick shower we met in the lobby and headed to a local seafood restaurant – a particular favourite of ours when we’re in the area.

In Italy, particularly on a day off, it has become something of a band custom to drink ‘Limoncello’ – an Italian liquor, made from lemons; a bit like lemonade only with 30% alcohol! I decided to allow myself just one glass, seeing as I had already had a couple of glasses of white wine with our meal. Little did I know that my one glass would turn out to be bottomless; no matter how much I drank, my one glass was always full – deep in conversation, it was a while before I realised this. I kept drinking my one glass of Limoncello for what must have been about an hour (I can’t be sure about such details as, at this point in the story, things become a little hazy!). When I caught Stefano topping up my glass I realised what had been happening. I was starting to feel the effects of too much limoncello so, in a desperate bid for salvation, I gave the contents of my glass to Stuart and turned my empty glass upside down to prevent it from being refilled! Unfortunately the move was too little too late and, although I spend the rest of the evening drinking coffee and mineral water, much of what followed is a distant blur.

Previously on the tour, Carl had told us that Radio Head had just refused to fly to the US to make a one-off appearance, due to the fact that the carbon footprint incurred would be unjustifiable; instead they played the show via satellite from London. The irony of Carl’s timing in telling us this story was uncanny; we’d just taken 8 flights in 6 days – this tour was clocking up an excessive carbon footprint which would off-set any good Radio Head’s gesture had made and, with our schedule ahead, showed no signs in easing its toll on the environment.