After one and a half of hours sleep, my alarm went off at 3am signaling the start of a new day (the lines between each day seem to be getting smaller and smaller on this tour!). I went down into the lobby and outside the hotel were people leaving a club; it was still very much the previous night for them! Adam, our driver, took us to our next airport and we checked in for our flight to Russia via a connecting flight to Copenhagen. From what I could gather, it seems that all planes in Russia are named in honour of some Russian hero; I thought it very fitting that we entered the country on ‘Sergie Prokofiev’! After our two flights, we arrived at Moscow airport and filled in the necessary entry documentation (which the cabin crew on the plane had neglected to give Stuart and myself because we were asleep – when we awoke and saw the rest of the passengers on the plane filling in the forms, we were told that they had none left and we would have to find some at the airport!). Once we had located and filled in the necessary forms, we joined the back of the passport control queue. There was an air of nervousness, certainly amongst the band, if not the other passengers; we were entering Russia, the land of mystery, tight cold war security and the KGB. As it happened, we needn’t have worried as we all came through passport control unquestioned and, once we’d collected our baggage, we went through customs and were met by our Russian hosts.

Our hosts took us to our hotel in three cars, one of which was an expensive looking ‘people carrier’ (as us Brits call them, or for those of you reading in the US, ‘a van’!). The other 2 cars were considerably less pretty; very old estate cars complete with rust patches and numerous other imperfections, adding to their tired appearance. My reason for mentioning these cars is that they represented a pattern that I soon noticed when we hit the roads of Moscow; the busy traffic appeared to consist of just two type of vehicle, the first and by far most common was the tired, rusty old cars that made up 2 3rds of our convoy. The second was a less prevalent, but still ever present, category of beautiful, shiny cars (usually 4×4’s with blacked-out windows) lavished with all manner of extra and unnecessary luxury finishing touches. As far as I could tell, there were no cars that fell in-between the extremes of these two categories.

Our convoy, limited to the speed of our two accompanying cars, took us to our hotel; a huge building in the middle of it’s own grounds, consisting of lakes, woods, a golf course… you get the picture. The hotel definitely fell into the same category as the lavish cars on the streets of Russia – it appeared that no expense had been spared in the construction of this mammoth building and, in order to keep it that way, every car had to stop at a security check point at the entrance to the hotel’s grounds. After 40 minutes sleep at the hotel, we left for the club where we’d be playing that night’s concert 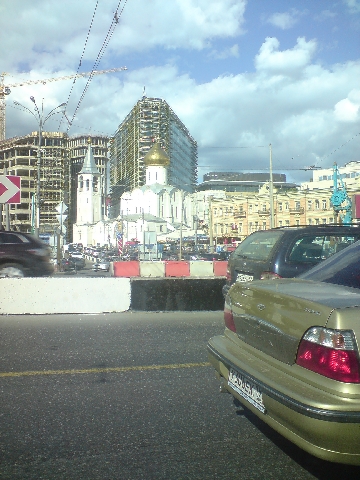 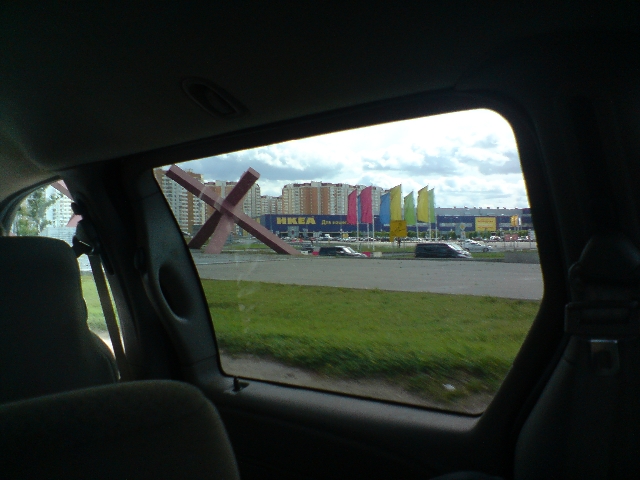 The venue for the evening’s concert was a good-sized rock club. ‘Good-sized’ venues are obviously great to play, but only if they’re filled with a ‘good-sized’ audience! On our way to the club we learned that Russia were playing Spain in an international football match – there were crowds of people on the street waving flags and a good number of cars were fitted with flags too. Once again, our attendance would be affected by a football match and, as a result, we’d only sold about 80 tickets before the concert.

On arriving at the club we saw a poster advertising the gig, as you would expect, most of the poster consisted of photos and information about Carl. However, me a Stuart also got a mention: ‘Paul Bielatowicz (Neal Morse’s Band)’ and ‘Stuart Clayton (Level 42)’! I presume the poster designer had searched the Internet to see what else me a Stuart had done and, in doing so, had come across the series of level 42 bass transcription books Stuart had written. With this simple breakdown in the language barrier, Stuart Clayton became Mark King for an evening and we hoped that no Level 42 fans would turn up to the concert wondering who this ‘Carl Palmer’ bloke was! 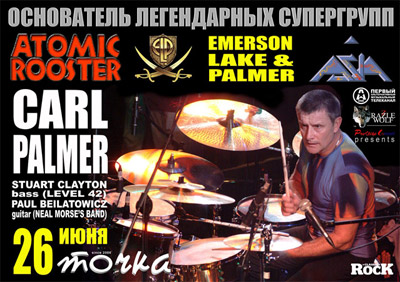 When we got to the stage to check out what gear we’d been provided with I saw that, standing at my side of the stage, was a single channel Marshall vintage reissue. It looked like a great amp, but whether or not I’d be able to get it to do the job in hand was another matter. The way I approach getting a distorted sound is simply to drive the amp as hard as I can – I very rarely use distortion pedals of any sort as I try not to add anything to colour the natural sound of an amp. This, I find, is a great way to get a good tone, but relies on using an amp that can be driven hard enough to make it distort in a pleasant way. I had a hunch that this approach wasn’t going to work with this amp and, being a single channel amp, it would also give me an added hurdle in the many sections of the set where I have to quickly change between distorted and clean sounds (for any non-musos, with a two channel amp, this can easily be achieved by using a footswitch to switch between the clean and distorted channels). I plugged into the amp and my suspicions were confirmed when I turned up the gain, causing the amp to sound like it was about to die (in a bad way!). I tweaked the amp as best I could but, before I completely resigned myself to the prospect of having a bad sound for the gig, and set off in search for an alternative. In a small room by the side of the stage I found two ‘Torque’ amp heads that were clearly two channel transistor amps. For a rock guitar sound, transistor amps can’t compete with valve amps, but for the convenience of having two channels and a healthy amount of gain, this was a sacrifice I was willing to make. I asked one of the club’s tech guys about using the amp and he explained that they weren’t very good and that the club only used them as ‘tables’!?!! I insisted that I’d like to try one for myself and, when I did, found a very usable sound with the convenience of a footswitch (and this amp must have retailed for a fraction of the price of the Marshall). I explained to the tech guy that I’d like to use the ‘table’ instead of the Marshall and he reluctantly obliged. 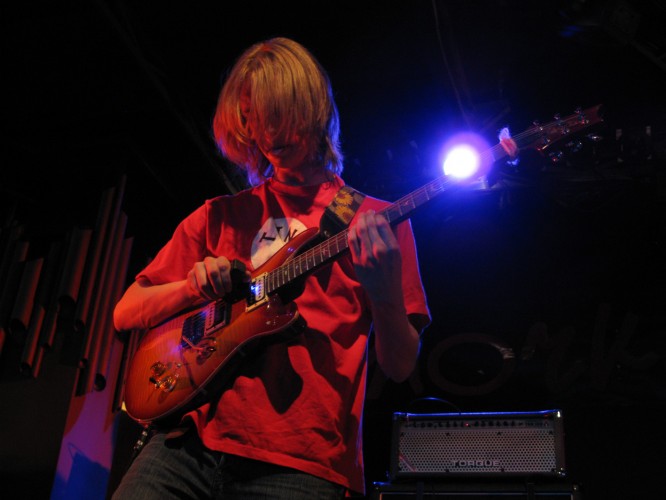 Unknown to me, Stuart had a similar conversation when he found his SVT wasn’t packing enough punch, he asked to try another, lower model of SVT that he found sitting on the floor at the back of that stage and, in spite the same tech guy’s reservations, he found it did a better job.

Show time came and we played an enjoyable show in front of a small but appreciative audience. After the show I went out to pack my pedal board away and chatted to a few audience members who had stayed behind at the front of the stage. I always enjoy meeting people at our gigs and it was good to chat with these people about music and, in particular, Neal Morse!

After the gig we set off back to the hotel for a meal. It seems to be the norm for a band on tour in Russia to choose what they want to eat before the concert – we had filled in a menu form in advance so that our food would be waiting for us the moment we arrived at the hotel’s restaurant. Our route back to the hotel took us through the centre of Moscow, this being the case, I requested that we might be driven around some of the sights of the city before we had dinner. Unfortunately, in doing so, I caused us to break off from our convoy (we were following the other cars), as all attempts to alert the other cars to our change of plan failed. Undeterred, our driver, a warm, lively Russian lady took us on a detour past the Kremlin and Red Square which gave us a spectacular glimpse of one of Russia’s most famous landmarks. Happy not to be leaving Moscow having just seen the inside of a hotel and club (which is so often the case with many of the cities we visit) we proceeded to head to the hotel. As well as being an adept driver on the treacherous streets of Russia (we saw the afore mentioned ‘excessive’ cars weaving in and out of the traffic on the wide streets of Moscow at speeds that must have reached in excess of 70 mph) our hostess was clearly a keen mobile phone enthusiast, spending much of our journey in conversation with several unknown Russians. After being engrossed in one such conversion, she announced that we must have taken a wrong turn somewhere, as she no long knew where we were! Several more conversations on the mobile followed, in an attempt to try to get us back to our hotel. When mobile phone directions failed we made a quick stop to ask a policeman for directions. A few miles after we’d stopped for the policeman, we came to an abrupt halt in the middle of a motorway interchange, where the road forked off in various directions. Here, our driver got out of the car and proceeded in an attempt to flag down other cars hurtling past us at Moscow speeds, in the hope that one might stop to give us directions. Eventually a taxi driver stopped for us and was paid to drive in front of our car and point us in the right direction. Back on the ‘right road’, it wasn’t long before we were lost again! Then, much to everybody’s relief, Stuart spotted a familiar landmark and shouted, “It’s over that bridge”. The way back to our hotel was indeed over the bridge and, with the help of Stuart’s keen eye, we were soon back and enjoying a meal of cold soup (which would have been warm had we arrived 45 minutes earlier, as planned) and veal. On the way into the hotel we met one of the other cars from our convoy, carrying 2 of our Russian hosts, who were leaving to catch a night train to meet us in our next city; St. Petersburg.